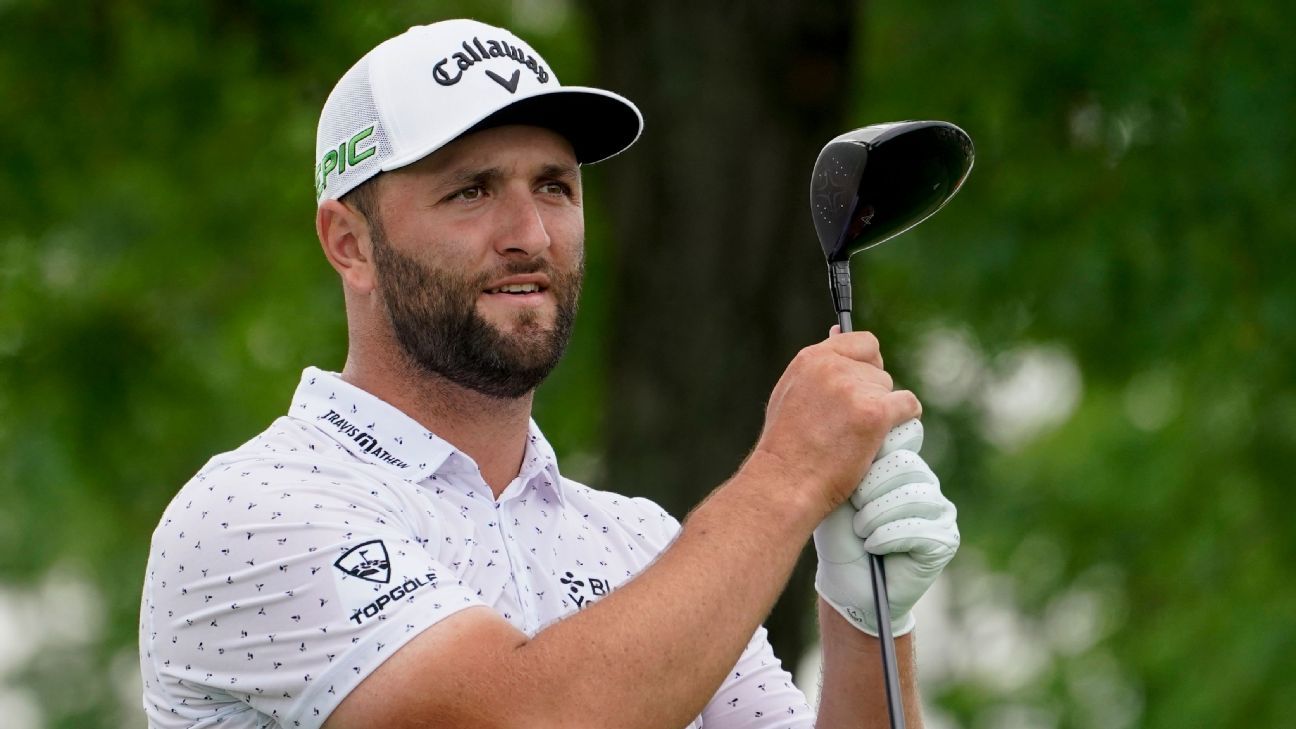 The FedEx Cup playoffs conclude this week with the TOUR Championship at East Lake Golf Club in Atlanta, Georgia.

Which players are the favorites this time around, who offers good odds and what props are worth considering?

Bearman: With all due respect to Open Champion Collin Morikawa and 2021’s only 3-time winner, Patrick Cantlay, only one golfer has shown up on page one of the leaderboard in every single event since late May and that’s Rahm, the world No. 1. Since May, Rahm went T-8 at the PGA Championship, was leading the Memorial by six strokes before the Covid withdrawal, won the U.S. Open, finished 3rd at the Open and has gone 3rd and T-9 in the first two playoff events. He took over the top spot from Morikawa in shots gained total and T2G and is 2nd off-the-tee. He’s also 2nd in hitting greens, a stat that seven of the last 20 champions here have led in. Simply put, he is playing better than anyone. He starts four shots back, but that is very manageable and could be gone by the end of Thursday. Would you bet against Rahm over the final three rounds if he was T-1 after the first 18 holes? Rahm has finished no worse than 12th in his four East Lake appearances, finishing 4th last season. It would be only fitting that Rahm caps off his historic year with the FedExCup title, which would likely lead to 2021 Player of the Year, completely erasing the setback at the Memorial.

Fallica: While he’s spotting Cantlay four shots, I have to believe its nearly impossible for Cantlay to repeat that performance he displayed on the greens last week — better than 14 SGP. And that would bring quite a few players into it, with Rahm topping that list. Rahm’s 9th place finish last week was his “worst” since May. He’s the Tour leader in SG: Tota and SG: Tee-to-Green, and has played well at East Lake. His season has been one which deserves to end with a FedExCup title.

Fallica: As well as Xander Schauffele has played at East Lake, McIlroy has played even better. He’s won twice and has a runner-up finish as well. Rory’s short game has been a struggle much of the year, but since missing the cut in Augusta, he’s won at another event he loves playing — Wells Fargo — and finished T-7 at the U.S. Open and 4th last week at the BMW. He’s been very open about playing “too much” golf and a the fact the season ends here, I can easily see McIlroy going into the offseason on a high note.

Bearman: Rory, starting eight shots back of Cantlay, is likely too far back to win the entire thing, even though he started five shots back and gained 10 shots over FedExCup leader Justin Thomas two years ago en route to the title. He played great last week at the BMW, finishing T-4th and has shown flashes lately of Rory of old, getting to the Bronze Medal playoff in Japan and also finishing 12th at WGC and T-7 at the U.S. Open. While making up an 8-shot deficit is a tall order and comes with only 25-1 odds, I think the better play is for him to have the best four rounds at East Lake this week at 12-1. He loves playing the course, winning it in 2016 and 2019, along with four other Top 10s. In the last 30 rounds at East Lake, McIlroy ranks 2nd in shots gained total and 1st in T2G, ball striking and off the tee. The format might keep him from lifting up the trophy, but he can have the best 4-round score this week and 12-1 is a nice price considering there are only 30 golfers. I also think he can make up the 3-shot deficit to finish in the top 5 of the overall standings at +350.

Bearman: JT is a couple shots closer to Cantlay than McIlroy is, entering six shots back. Still might be too far, but it’s more manageable and you can get him at 16-1 to get it done. If you think it’s too far back, could do same strategy and pick him to have the best 4-round score at the same 12-1 price we got for McIlroy. Thomas has done everything but win at East Lake with all five appearances finishing in the top 6, including runner-up finishes in 2016 and last year. He comes in 2nd in T2G at East Lake over the last 20 rounds and 4th overall and off the tee. For the season, JT is 3rd T2G, 8th in shots gained overall and 3rd on approach. The putter is always the worry with Thomas, so let’s just hope he hits a few.

Marks: JT is coming in hot after a final round 66 at the BMW Championship on Sunday. Metrics for East Lake fit JT’s game better than most; 3rd SG tee to green, as well as on approach, and T10th in par 3s birdie or better this season. If his putter can perform the way it did at the Northern Trust, we will be in the money.

Fulghum: JT is 8th on Tour in Par 4 scoring this season, recorded top-7 finished in each of the last 5 Tour Championships and is awesome in no-cut events (8 of 16 career wins).

Bearman: If I was going to pick one guy from way back to win, it would be Xander, who enters eight shots back like McIlory. He has longer odds than Rory at 28-1 and has won more recently, earning the gold in Japan. He also had the low 72-hole score last year at -18, but didn’t catch Dustin Johnson. He’s the only golfer ahead of McIlroy in strokes gained total at East Lake since his first appearance in 2017. That appearance ended with a win and he also finished runner-up each of the last two years here. The world’s 5th ranked player has had his expected post-Olympics letdown, going T-46, T-16 and T-49 the last three events, but he will be ready for East Lake and should finish in the top 5, where he has finished in three of the past four seasons.

Fallica: This is hardly a surprise being Schauffele won the event without the handicap last year, finished 2nd in 2019 and won in 2017. He has sputtered some since winning Olympic Gold, but back at a place he’s played extremely well, he’s again a threat to win the event when one eliminates the FedEx handicap. Despite starting eight shots behind Cantlay, he’s probably worth a small play to win the Cup as well, considering Cantlay has not played well here at all (T-21 twice and 20th).

Bryson DeChambeau to finish outside Top 5 of FedExCup (+120)

Hosted by Mike Greenberg, the series uses in-depth interviews and dramatic recreations to relive the wildest, saddest, funniest betting tales and their unexpected repercussions. Stream all 12 episodes on ESPN+

Bearman: Even if you take out the emotional toll last week’s playoff loss, in which DeChambeau had four different putts to win, I still would fade him here. Unlike last week’s grip it and rip it course in Maryland that allowed for seven players to reach -20 and Bryson to not win with a -27, East Lake is a tree-lined 18 holes that caters to accuracy over distance. There are no driveable Par 4s that you saw last week. You also need a good short game to win here, which DeChambeau showed last week is not his strength. Don’t get me wrong… he could very much rebound from last week, hit all his fairways and win going away. But I do not think this course is suited for him as he’s finished no better than T-12 in three appearances and I can’t imagine his state of mind is too good after last week.

Fulghum: As Bearman mentioned above, he is the best player in the world right now with top-10 results in 7 straight events. Only 1 of last 16 rounds played over par (+1 in first round of Open Championship)

Fulghum: Hovland has gained 20 strokes ball striking over last 4 events. He also prefers putting on Bermuda grass and is 6th on Tour in birdies per round + 15th in scoring average this season.

Tony Finau (+115) over Bryson DeChambeau with the FedExCup points

Bearman: I mentioned above the reasons I am fading DeChambeau this week. Add in the fact that Finau starts one shot up on him and is getting plus money and there are no more questions for me.

Marks: Finau starts the TOUR Championship just two shots back from Cantlay, and three shots up within the top 5. Finau has been lights-out the first two rounds of the FedEx Cup, with no rounds over par. His track record at East Lake is solid, and has been making a lot of ground with his irons as of late.

Marks: Van “Ankle Pants” Rooyen was first in strokes gained tee to green last week at the BMW Championship. He had extra motivation to make it inside the top 30, and finished 5th to punch his ticket to Atlanta. I expect him to stay hot in HOTlanta.

Marks: Im finished 3rd at the BMW Championship on Sunday. He is driving the ball well and ranks top 10 in both SG Off the Tee and Tee To Green during his last three tournaments. Nine of the last 20 winners at the TOUR Championship have been in the top 5 in driving accuracy, and Im ranks 12th this season.

Fitzpatrick enters busy stretch with neck injury
Golf Mistakes That DRIVE US CRAZY! | ME AND MY GOLF
An out-of-nowhere 63, as the weather turns and a major champ’s neck issues
Butch Harmon Short Game Golf Lesson
THE most FRUSTRATING yet REWARDING game – Worst Ball Vlog