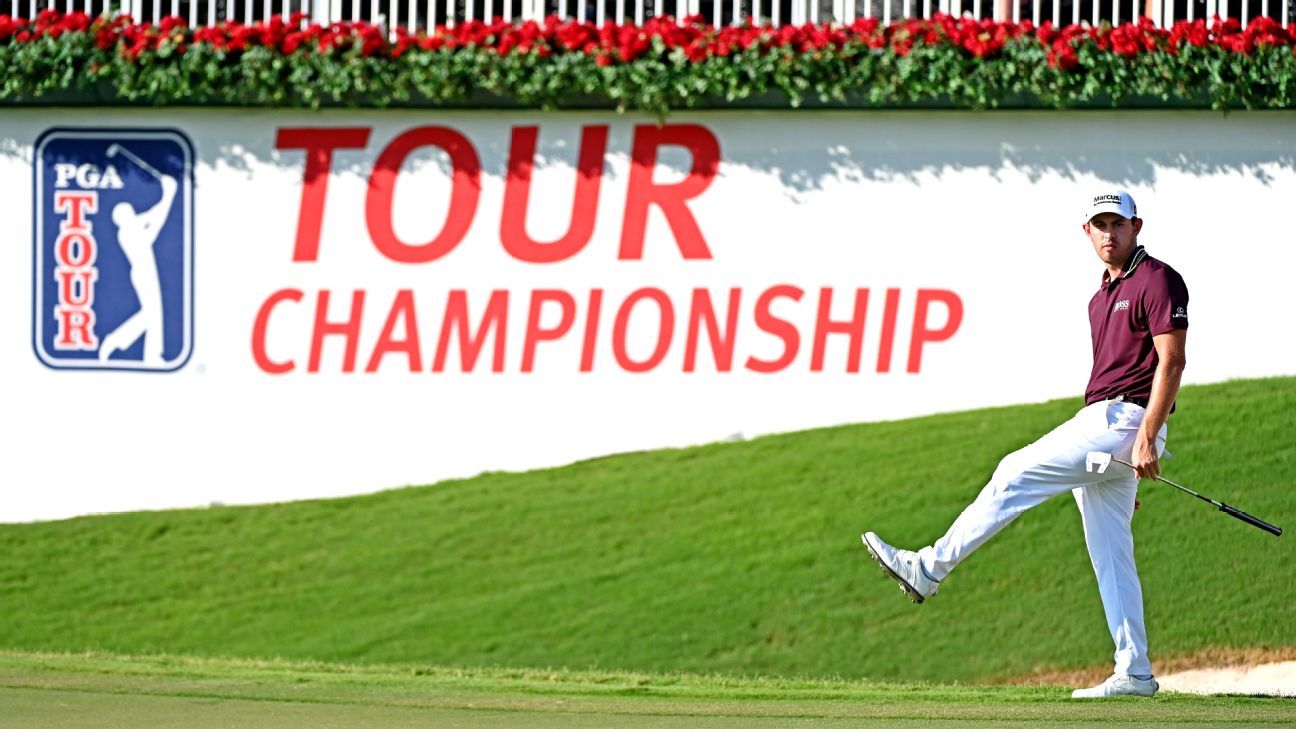 ATLANTA — Patrick Cantlay met his goal in the first round of the Tour Championship on Thursday, and it had nothing to do with the score on his card or the size of his lead.

This was all about playing another tournament round.

“I think being in the spot that I’m in, it would be easy to get ahead of yourself and easy to maybe stray from your game plan because you feel like you’re ahead,” Cantlay said. “And that’s just not helpful, so I’m not going to do that.”

Only four players had a better score, so it was a good day regardless of the format that allows players to start at various points under par depending on their FedEx Cup positions.

Rahm began by chipping in for birdie, kept the round from getting away from him with a few key saves — one for bogey, one for par — at the turn, and ran off four birdies over his last seven holes for a 65.

Five shots behind were Bryson DeChambeau and Harris English, and only one of them managed to pick up a little ground on Cantlay while delivering one of the more exciting moments.

That would be English, who was headed in the wrong direction when he stepped to the tee at the par-3 15th over water — the second-toughest hole at East Lake — smashed a 5-iron from 224 yards and watched it drop for a hole-in-one, the first one since the Tour Championship first came to East Lake in 1998.

He followed with two more birdies for a 66, one better than Cantlay on the day, a little closer than when English started.

DeChambeau birdied his last three holes to salvage a 69. He started 3 shots behind and now is 5 shots behind, without any reports of unruly behavior outside the ropes.

The subject of name calling was — who else? — English.

One fan following along kept referring to him by another name — Hudson Swafford — which is understandable. English and Swafford were teammates at Georgia, have similar builds, look a little alike. They’re even tied in driving distance (81st) on the PGA Tour.

“He thought I was Hudson like half the people out here,” English said. “I think he kind of had a couple beers. … He just couldn’t quite tell from 50 yards out who I was.”

This is the third year of the format, and Cantlay doesn’t know how the lower half feels. He was the No. 2 seed in 2019 when it started, the No. 1 seed last year. That first time didn’t go well. He had one of his worst weeks of the year, which cost him nearly $2 million with how far he fell.

Justin Thomas was the Nos. 1 and 3 seeds the previous two times. Now he’s at No. 6, meaning he started 6 shots out of the lead. That was a new experience.

He noticed he already was in 10th place by the time he teed off, based on some early scoring, and found that to be a bit jarring. Worse yet was being 1 over on the front nine. Starting out 6 shots behind in the first place, his hopes could have ended early.

But he shot 31 on the back nine, had five birdies and one impressive par save on the 14th, and pieced together a 67. He’s still 6 back. It could have been worse.

“When you start behind like that, unfortunately, you just don’t have the luxury of shooting a 1 over or 2 over the first round,” Thomas said. “And I salvaged a good round out there and feel like I can easily go out there and shoot 6 or 7 under one of these next three days. And hopefully I do.”

Rahm started 4 back and, like Cantlay, chose not to pay attention to anything but the next shot, even as the good start looked as though it could get away from him. He took bogey from the left rough on No. 7, had to get up-and-down from behind the eighth green for bogey and saved par from a bunker on the par-3 ninth.

That was as important as some of his birdies. Now he’s 2 behind Cantlay with 54 holes left, and no matter how odd it might seem at the start, now it feels like a regular tournament.

“It’s very easy to get caught up on how far back you start. I don’t think I really once thought about it out there. I was just trying to post a score,” Rahm said. “My job is to hit the best shot I can each time and that’s all can I control.”