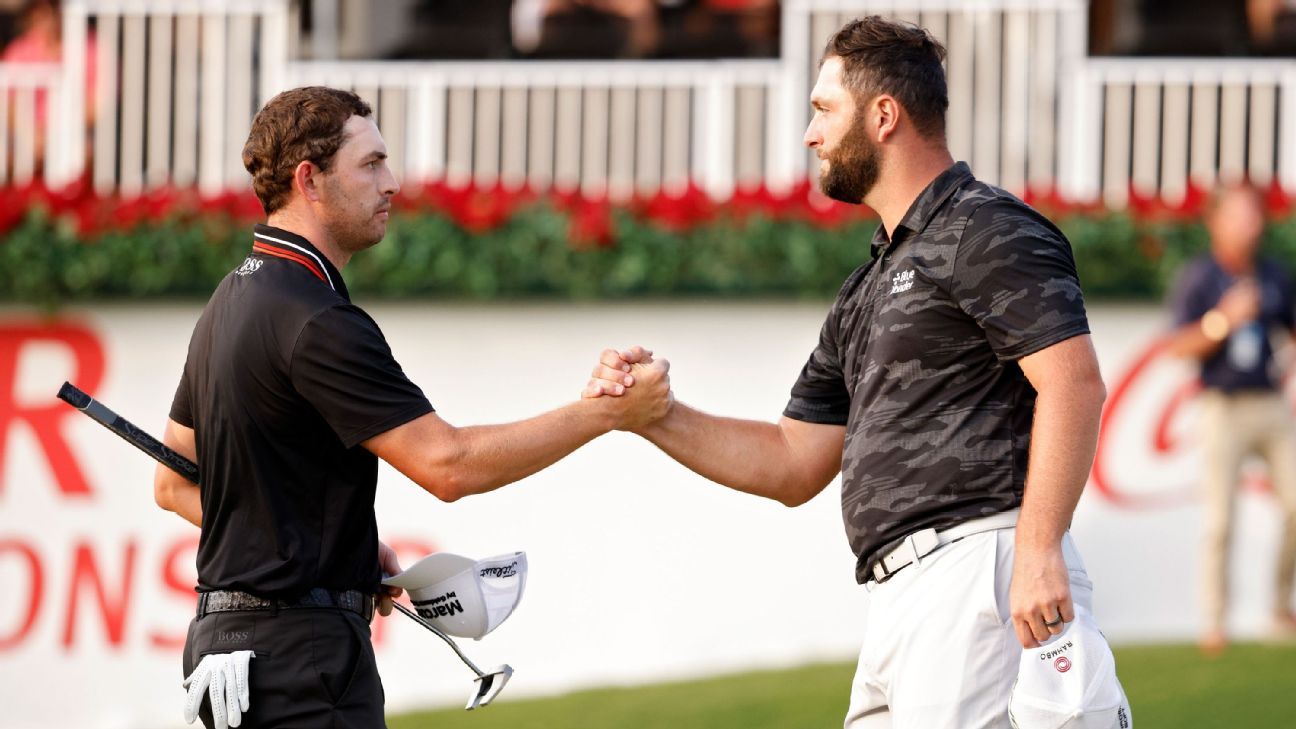 ATLANTA — Patrick Cantlay finished with a 25-foot birdie putt that gave him a two-shot lead over Jon Rahm in the Tour Championship on Saturday and set the stage for a sprint to the $15 million prize.

It might not be a two-man race at East Lake, anymore.

Cantlay’s final birdie allowed him to finish strong after a wobbly four-hole stretch that had winnowed his four-shot lead down to one. He wound up with a 3-under 67 and was at 20-under par, leaving him one round away from the FedEx Cup.

Rahm finished with five straight pars for a 68 and was still very much alive. He went from a four-shot deficit after the 10th hole to a one-shot deficit just five holes later.

It’s not easy to go low at East Lake, but it’s easy to lose ground. Cantlay did that with a pair of mistakes over the final hour,” Rahm said. “Hopefully tomorrow, I can bring my A-game and give this guy in front of me a little bit of a run.”

Not to be overlooked was Justin Thomas, though he was agitated with his finish.

Thomas, who began the Tour Championship six shots behind because of his position in the FedEx Cup coming into the finale, was poised for the low round of the week to get a little closer. But he pulled his tee shot on the par-5 18th, went rough-to-rough to 35 feet, and then three-putted for bogey by missing a 5-foot putt.

He was five behind.

No one else was closer than seven shots of Cantlay, who began the week at 10-under par after his BMW Championship victory made him the No. 1 seed.

Cantlay had reason to think Sunday might have involved a little less stress. He and Rahm had matching birdies from the greenside bunker on the par-5 sixth, and then the cool-headed Californian began to pull away.

Cantlay made a 12-foot birdie on No. 7. Rahm found a bunker off the tee at No. 8 and made bogey. Cantlay holed a 30-foot birdie across the green at the par-3 ninth, and then drilled his approach to 10 feet for another birdie on No. 10.

Just like that, he was four shots clear and not making any mistakes that would suggest he was going anywhere but forward.

But he missed the 11th green for bogey, and then it became a real struggle down the stretch. Cantlay found trouble left of the fairway on No. 14 and had to scramble for bogey. He badly missed the 16th green with a wedge in his hand on No. 16 and again scrambled for bogey. In between, he missed birdie chances of 10 feet and 8 feet, the length he had been making all day amid calls of “Patty Ice.”

And then on the 18th, Cantlay faced a tough bunker shot over another greenside bunker to a tight pin. He played smartly, as he’s done all week, and left himself 25 feet for a birdie putt that put a happy finish on his round.

Thomas was the only one of the dreamers to have real thoughts of winning, along with perhaps Kevin Na (66), who was seven shots behind.

Rory McIlroy took himself out of the picture with a 74. Jordan Spieth, who thrives at East Lake, wasted a good start with too many bogeys and then nothing but pars over the final eight holes for a 70. Harris English didn’t make birdie until the 17th hole and shot 75.

It looks like match play between Cantlay and Rahm, depending on how Thomas starts and whether he can stay close enough.

So much more is at stake than the $15 million prize for winning.

Still to be determined after the season ends Sunday is PGA Tour player of the year. Rahm would seem to be a leading contender with his U.S. Open title and top finishes in the majors, along with British Open champion Collin Morikawa.

A win for Cantlay would be his fourth of the season – no one else has more than two – and it would include the FedEx Cup.