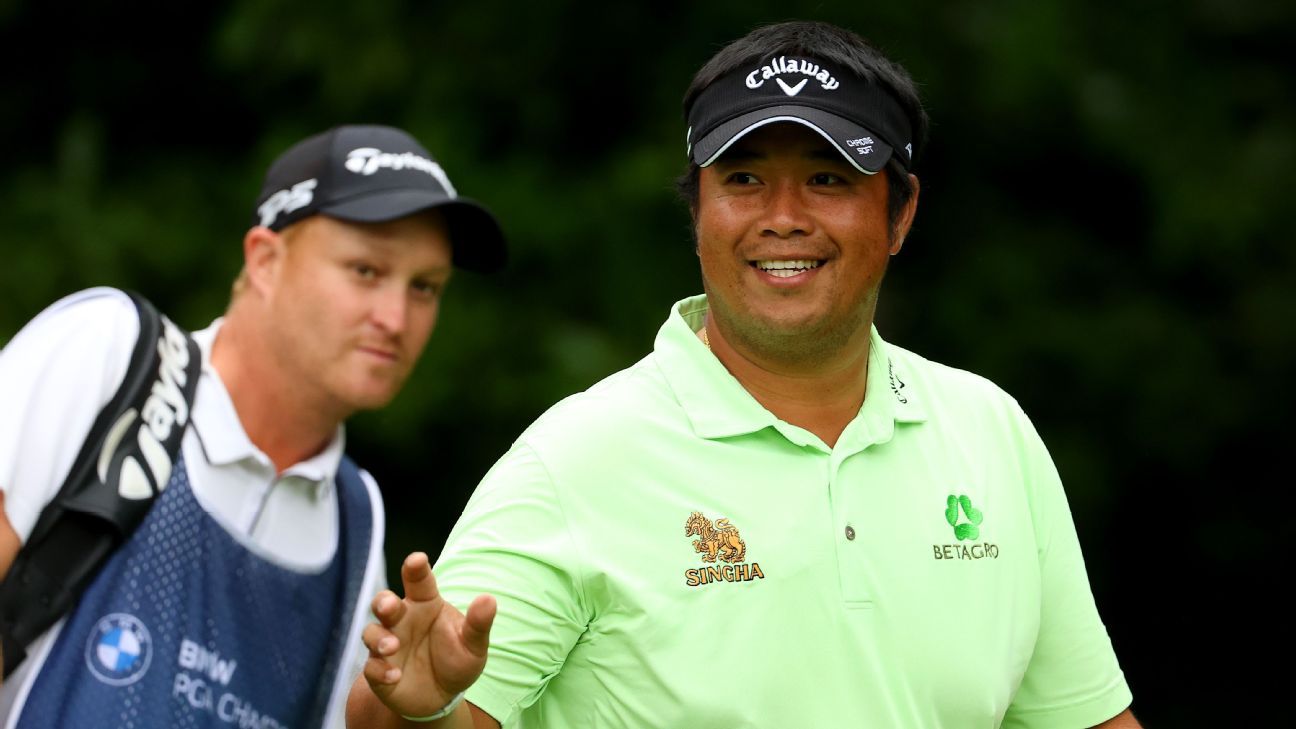 Thailand’s Kiradech Aphibarnrat maintained his lead at the BMW PGA Championship with another impressive round at Wentworth as the battle for last-ditch automatic qualification for the European Ryder Cup team intensified on Friday.

Aphibarnrat followed his eight-under 64 on Thursday with a 68 to reach 12 under at the halfway point of the European PGA’s flagship event, which has also become the last chance for players to get into Padraig Harrington‘s 12-man team.

Of the players hoping to join the five players already guaranteed a spot on merit, England’s Justin Rose was best placed as he reached nine under after a round of 68.

Ryder Cup stalwart Rose needs to win the event to claim one of the remaining automatic spots, although his impressive form makes it likely he would be one of Harrington’s three wildcards picks for the match at Whistling Straights this month.

Irishman Shane Lowry looks almost assured of claiming his place without the need of a pick as he reached eight under following a six-under 66 on Friday.

“It’s up to Paddy what he wants to do Sunday evening but hopefully I don’t need that pick,” said Lowry, who began the tournament in the ninth and final automatic spot.

Austrian Bernd Wiesberger, who needs a top-50 finish at Wentworth to guarantee a Ryder Cup debut, did his chances no harm at all with a five-under 67 to move into the top 20.

England’s Matt Fitzpatrick is closing in on a place too after a round of 69 meant he safely made the cut.

Lee Westwood, who occupied one of the qualification places heading into the event, posted a round of 70 for the second successive day to reach four under.

While Westwood should now make the team for the 11th time in his career, he said the Ryder Cup qualification process was flawed.

“There’s so many variables, as well, with the way we’ve set up the qualification this time around,” he said.

“This tournament is heavily loaded compared to everything else we’ve done. I think it’s something to maybe look at in the future.”

It could be an anxious weekend, however, for England’s Tyrrell Hatton. The defending champion carded a three-under 67 after his disappointing round of 74 on Thursday, but is projected to miss the cut for the weekend.

Europe’s ‘Mr Ryder Cup’ Ian Poulter was also likely to miss the cut although he is almost certain to be one of Harrington’s picks, given his inspirational Ryder Cup form.

While the scramble for Ryder Cup spots preoccupied many, Aphibarnrat again played beautifully.

Back-to-back birdies at the 16th and 17th holes helped him move into the sole lead, one shot ahead of England’s Laurie Canter whose 66 left him on 11 under.

Australian Adam Scott was a further shot back in third place while four players — Rose, Italian Francesco Laporta, Welshman Jamie Donaldson and American Billy Horschel — were on nine under at the halfway mark