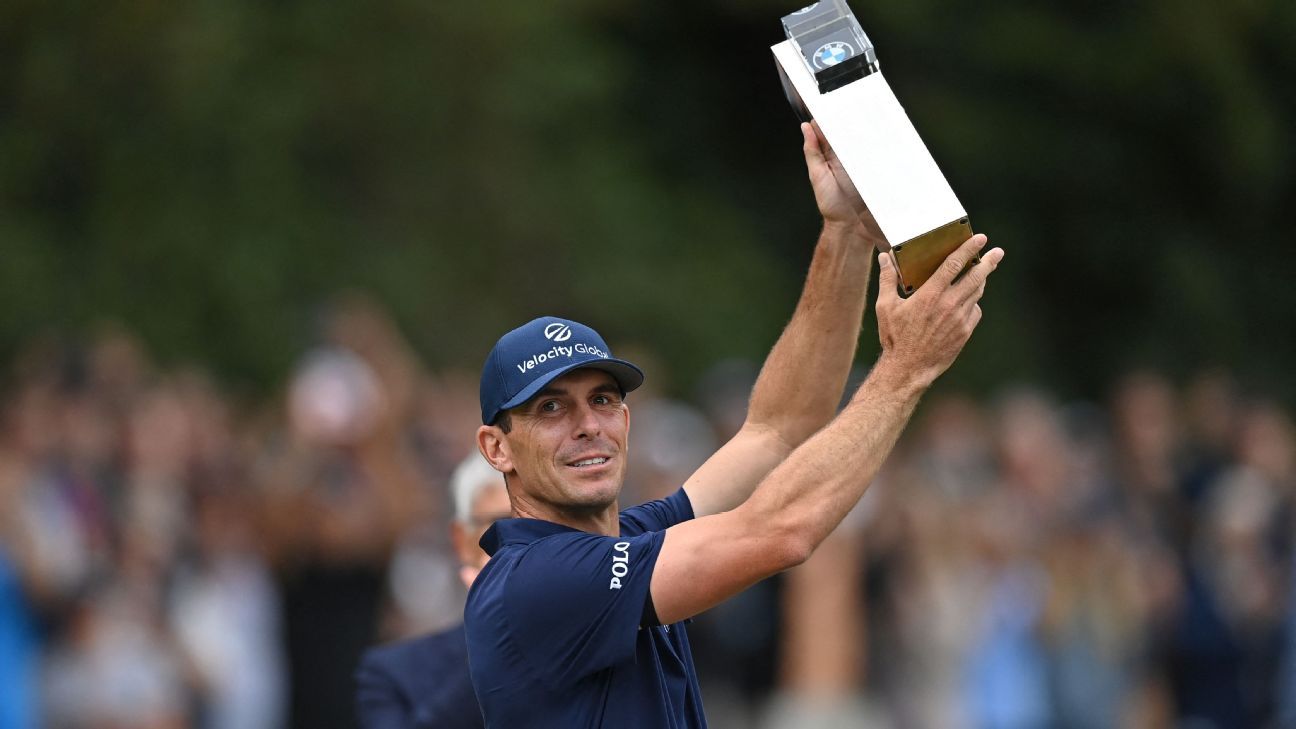 American Billy Horschel birdied the 18th hole to claim the BMW PGA Championship title in a tense finish on Sunday in a tournament with huge implications for Europe’s Ryder Cup team.

Horschel was tied for first in a group on -18 as he stood over his third shot at the par-five 18th at Wentworth but produced a sensational wedge for a nailed-on birdie to complete a sizzling round of seven-under 65.

Englishman Laurie Canter then needed to find a birdie at the last to force a playoff but was unable to do so and ended in a tie for second alongside Welshman Jamie Donaldson and Thailand’s Kiradech Aphibarnrat who shot a superb closing 64.

Horschel, whose bag sports the colours and emblem of English Premier League club West Ham United, is only the second American to win the title, and he follows in the footsteps of Arnold Palmer.

Apart from the title at stake in the European Tour’s flagship tournament, the race to nail down the four remaining automatic spots on Europe’s team for this month’s Ryder Cup offered an intriguing sub-plot throughout the week.

Austrian Bernd Wiesberger, who required a top-50 finish to book his Ryder Cup debut, ended with a level-par 72 which was enough for a share of 20th and a seat on the plane.

“It’s unreal you know, it was really tough out there today,” Wiesberger told Sky Sports. “You try to stay away from all the noise but it was difficult. I had to grind. But at the end of the day I’m really proud and relieved to make the team.”

Justin Rose did not claim the title which would have elevated him into the Ryder Cup team on merit although his majestic final round 65 for a share of fourth place at 16 under is likely to have impressed Europe captain Padraig Harrington.

Rose, a stalwart of several Ryder Cup victories, almost produced an albatross at the par-five 18th when his second shot ended just a foot from the hole.

Ireland’s Shane Lowry was left sweating on receiving a captain’s pick for the Ryder Cup after failing to secure the top-eight finish he required to grab an automatic spot.

Lee Westwood‘s dismal round of 77 had opened the door for Lowry to edge above him in the race to grab one of the last remaining places, but Lowry faltered on the back nine.

After moving into a tie for fifth place Lowry bogeyed the 14th and followed that with a double bogey, ending on 12 under in 17th place.

Harrington will name his three picks later on Sunday with Rose, Ian Poulter and Sergio Garcia favourites to get the nod for a place on the team to travel to Wisconsin.

Free Golf Lesson under 1 minute how to swing in an arc!
Golf Mistakes That DRIVE US CRAZY! | ME AND MY GOLF
LIV golfers Phil Mickelson, Cam Smith miss the cut in Saudi International
Jordan Spieth says his cliff shot at Pebble could have been worse … but not for the reason you think
THE most FRUSTRATING yet REWARDING game – Worst Ball Vlog