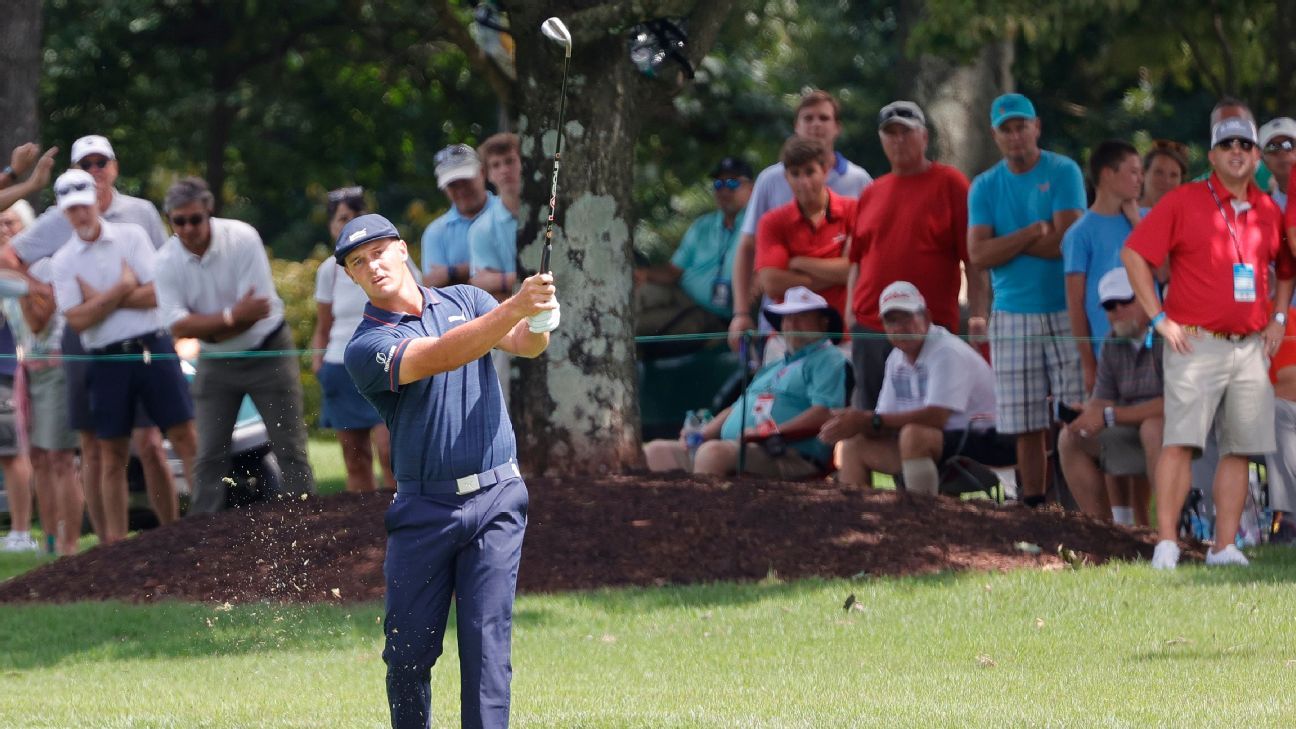 Golf never really ends, it just takes a brief break. This year, it’s a grand total of one week. The actual number of days between PGA Tour events will be 11.

Before the 2021-22 seasons begins on Thursday in Northern California, a look back at the 2020-21 “super season” that saw 50 official events and six major championships played in roughly a 12-month period, and a look ahead to what’s coming now that the 11-day break between seasons is over.

No player made more headlines than Bryson DeChambeau. From his six-shot U.S. Open victory in September 2020 to his spat with Brooks Koepka — and that was just the beginning of the Bryson drama — DeChambeau was an overwhelming story in the season just completed.

He won his first major at Winged Foot, had a stirring victory at the Arnold Palmer Invitational, wowed fans with long drives, contended at the 2021 U.S. Open, lost in a stirring playoff at the BMW Championship and continues to approach the game from a different place.

But after his March win at Bay Hill, the headlines were mostly for other things. The spat with Koepka that began at the PGA Championship was the biggest one and is still ongoing. That led to on-course heckling and some verbal, social-media sparring between he and Koepka.

The final-round back-nine 44 at Torrey Pines when he had the U.S. Open lead was a shock. So, too, was his breakup with longtime caddie Tim Tucker on the eve of the Rocket Mortgage Classic. He called out his equipment after an average first round at The Open, drawing a rebuke from sponsor Cobra. He tested positive for COVID-19, keeping him out of the Olympics — then made some controversial statements about why he didn’t take the vaccine at the WGC-FedEx St. Jude Invitational, where he contended.

On the first day of the Northern Trust, DeChambeau shot even-par 71 — making just two pars. The next day he flirted with 59. And then he lost in a six-hole playoff at the BMW to Patrick Cantlay, hearing more catcalls on the course.

All the while, DeChambeau stopped talking to the media at the WGC event, due in part to the fallout from his COVID-19 comments. It was quite the year — good and bad — for DeChambeau.

He didn’t hit a shot in 2021, and yet Tiger Woods still produced some of the biggest headlines — all because of a horrific car accident in February.

Woods was going to get a late start to the year due to another back procedure, but the seriousness of the accident put any and all golf talk on hold. Woods’ injuries to his right leg, ankle and foot were significant, and there have been no substantial updates in months. His long-term health is the more immediate concern compared to any competitive golf plans.

Nobody dominated more and had less to show for it than No. 1-ranked Jon Rahm, who played as consistently well as anyone throughout 2021. His lone victory was a big one at the U.S. Open, where he birdied the last two holes to prevail.

That was just two weeks after a positive COVID-19 test following the third round of the Memorial Tournament. Rahm was forced to withdraw with a six-shot advantage.

Hideki Matsuyama was not on many people’s list of potential champions at the Masters, mostly because he had not won on the PGA Tour for four years. But he forged ahead in the third round, built a big Sunday lead, then held on to win over Will Zalatoris. Matsuyama became the first Japanese male golfer to win a major championship.

Phil Mickelson didn’t contend in a tournament for nearly a year before the PGA Championship. And he didn’t contend in another after. But he picked a great time to put it all together at Kiawah Island, where he got into the lead on Friday and stayed there through a hectic, frantic weekend that saw him hold off Brooks Koepka and Louis Oosthuizen to win his sixth major title.

Mickelson, at age 50, became the oldest major champion in the game’s history. The previous oldest was Julius Boros, who set the record at the 1968 PGA Championship. Mickelson won for the 45th time in his PGA Tour career.

Patrick Cantlay made a huge statement toward the end of the season after always seemingly being so quiet, showing flashes but never quite coming through to the level expected.

He won the Zozo Championship last fall, then didn’t win again until the Memorial — where Rahm’s departure created a huge opportunity. He didn’t contend in any of the major championships, but he was consistently good enough to hang close in the FedEx Cup points race.

His victory at the BMW over DeChambeau was one of sheer will, where he continually made putts to stay alive and then finally cashed in with a birdie on the sixth extra hole. That moved him to the top of the FedEx standings, gave him a cushion going to Atlanta. There he held off Rahm to win for the fourth time in the season. On Tuesday, Cantlay was named PGA Tour Player of the Year.

After some three years in golf’s abyss, Jordan Spieth bounced back in a big way in 2021. After missing the cut at the Farmers Insurance Open, Spieth finished top four in three of his next four events and then won the Valero Texas Open the week before the Masters for his first win since the 2017 Open. He also contended at The Open and is 15th in the world. Spieth was an easy U.S. Ryder Cup pick for Steve Stricker.

Just 24, Collin Morikawa has won two major championships in just eight starts. He added a second this year at The Open, holding off Spieth at Royal St. George’s. He won the PGA Championship in 2020. He also added the WGC-Workday Championship early in the year and was No. 1 in FedEx points heading into the playoffs before cooling off.

When he won the Masters in November, Dustin Johnson looked like he might never be beat. He had an amazing run in the fall and into the early part of 2021. And then he went quiet. Johnson had some nice results recently, but he missed the cut in his Masters title defense and again at the PGA Championship. He rarely contended after that although he did post a couple of late top-10s.

Justin Thomas won the Players Championship, putting on a ball-striking display in the final round at TPC Sawgrass where he shot 64. But it was his only victory. And he was barely a factor in any of the major championships. Thomas struggled with the fallout from an anti-gay slur he made at the Sentry Tournament of Champions, which led to losing an endorsement deal. His grandfather also died. It all seemed behind him when he won the Players, but Thomas could not manage another victory.

In addition to Mickelson winning the PGA at age 50, Stewart Cink captured two PGA Tour titles at age 47 — his first since winning The Open in 2009. Cink also qualified for the Tour Championship for the first time since that year. Brian Gay, also 47, won the Bermuda Championship last November, his first win in seven years. Sergio Garcia also won at age 40.

Despite winning the Wells Fargo Championship, Rory McIlroy saw his world ranking drop from fourth at the start of the year to as low as 16th. He missed the cut at both the Players Championship and the Masters after bringing on a new swing coach, Pete Cowen. After his victory at Quail Hollow, McIlroy’s best finish was a tie for fourth at the Olympic Golf Tournament.

The postponement of the Games and the subsequent restrictions that were put in place for the Olympics made for a good number of withdrawals and, unfortunately, a subdued atmosphere.

But those who took part said they were happy they went and glad for the experience. Americans Xander Schauffele and Nelly Korda won gold medals. On the men’s side, there was a seven-way playoff for the bronze that included Matsuyama in his home country, McIlroy and Morikawa. Rory Sabbatini, who about five years ago became a citizen of Slovakia, was the surprising silver-medal winner after shooting a final-round 61.

Real-world problems were part of the golf landscape, too. Given the situation, it was inevitable that players and caddies might get the coronavirus. Several high-profile players did. COVID-19 kept Rahm from playing the final round of the Memorial and also knocked him out of the Olympics. DeChambeau’s case took him out of the Olympics as well. Matsuyama tested positive at the Rocket Mortgage Classic and he decided not to travel to The Open in England because of quarantine issues. Garcia missed the fall 2020 Masters due to COVID-19.

But the tour nonetheless pushed on, slowly bringing back spectators earlier this year and changing testing protocols along the way. In 15 months of golf since the return in June 2020, the tour largely avoided big problems. There were no outbreaks associated with tournament events, and no events were canceled directly because of the coronavirus.

Rival golf leagues were again in the news, a subject that garnered considerable attention before the pandemic and came back in two different forms. The idea remains a big-money endeavor that would attract the top players with small fields, but likely meaning they’d have to renounce PGA Tour membership.

One way the PGA Tour has sought to strengthen its own position is by quietly instituting something called the Player Incentive Program (PIP). The idea is to reward players by engaging with the public and raising their profile through social media or other avenues. It is not directly tied to performance on the course. The program leaked earlier this year, and the pool of money is $40 million, with $8 million going to the leader based on a series of measurements. Commissioner Jay Monahan said those who would be enriched by the PIP would not be disclosed.

The PGA Tour’s schedule begins this week with the Fortinet Championship, formerly known as the Safeway Championship. Cink is the defending champion but won’t be there because his son is getting married. After next week’s Ryder Cup, there will be eight straight tournaments leading to Thanksgiving, two unofficial events afterward, and then a short break before the schedule resumes again in January to run through the Tour Championship in early September.

Some things will be different. The WGC-HSBC Champions in China has been canceled for the second straight year, meaning the Bermuda Championship will be a full FedEx event. It also means there will be just one World Golf Championship event on the schedule, the WGC-Dell Technologies Match Play in March. The Mexico Championship is slated to become a regular event; and the WGC-FedEx St Jude Invitational will become the first of three FedEx Cup playoff events, replacing the Northern Trust.

The PGA Tour’s collaboration with the European Tour will see three co-sanctioned events — the Scottish Open, which is the week before The Open at St. Andrews, as well as the Barbasol Championship and the Barracuda Championship, both of which will be played opposite the tournaments in Scotland.

Next year’s PGA Championship will be played at Southern Hills in Tulsa, Oklahoma, with the U.S. Open at the Country Club in Brookline, Massachusetts.

Once the first event of the new season begins on Thursday, there will be just 199 days until the first tee shots at the Masters.

The APGA is back on TV at Torrey Pines and will celebrate a minority golfer’s victory
McIlroy snubs Reed, in no mood for reconciliation
I’ve NEVER seen a golf ball like this!
Bubbie Golf Gets Lesson From Legendary Coach David Leadbetter
[박경준프로]헤드를 놓치지 말고 빨리 쓰세요 winning golf lesson