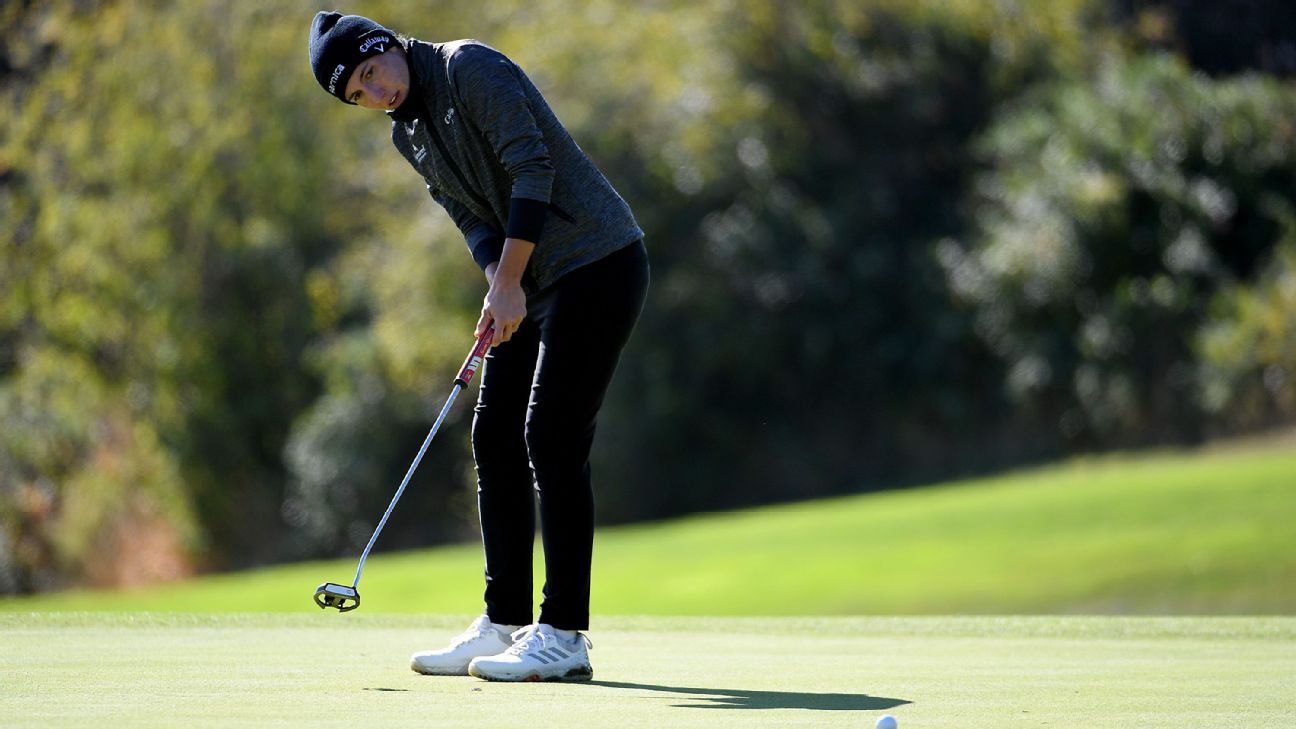 WEST LINN, Ore. — Carlota Ciganda overcame an early double bogey in chilly morning conditions Thursday for a 4-under 68 and a share of the first-round lead in the Cambia Portland Classic.

The only member of the winning European Solheim Cup team in the field, the Spaniard teed off with the temperature in the low 50s at hilly, windy and tricky Oregon Golf Club.

“This morning, some shots the ball was flying 10 to 12 meters less, at least for me on the range,” Ciganda said. “I was like, ‘I need to adjust this on the golf course because it is so cold.'”

Gemma Dryburgh of Scotland also shot a 68 in the morning, and Pajaree Anannarukarn of Thailand grabbed a share of the lead in the afternoon. Anannarukarn won last month in Northern Ireland for her first LPGA Tour title.

“Just kind of telling myself to finish the 18, honestly,” Anannarukarn said. “Try to stay hydrated and just keep filled up. Try to stay patient out there. It’s a really hilly course and just try to keep myself in the fairway, hit some good shot, and try to get a good speed on the green.”

Ciganda birdied two of her first four holes, then gave the strokes back with the double bogey on the par-4 14th. The two-time LPGA Tour winner rebounded to birdie two of the next three, dropped a stroke on the par-4 second and added three more birdies.

Ciganda took it easy last week after going 1-2 at Inverness in the Solheim Cup.

“To be honest, I was quite tired,” Ciganda said. “Last week, just went back to Phoenix, rest. I’m pretty good at that, so it was nice to just chill for a few days. And then I only played here on Tuesday, no pro-am, so I think it was nice to have the day off yesterday as well. No golf on the course. Yeah, I feel good. Trying to take that momentum from the Solheim and have that here, hit good shots, and try my best.”

Yealimi Noh was the only one of the five U.S. Solheim Cup players to break par, shooting a 71. Jennifer Kupcho shot 73, Mina Harigae 75, 2014 winner Austin Ernst 76 and Brittany Altomare 78.

Dryburgh holed out from 98 yards for eagle on the par-4 seventh.

“Just hit a little gap wedge,” Dryburgh said. “Hit it pretty perfect. Actually, I thought it was going long when I saw it on the green, but it just landed perfectly just short of the pin and rolled right in like a little putt, so it was perfect.”

Ko birdied the par-5 fifth to take the lead at 5 under with four holes left in her afternoon round, then closed bogey-bogey-bogey-birdie. Making her first start since the Tokyo Olympics, she won in Texas in July for her eighth LPGA Tour victory.

“The weather today was colder than I thought it’d be, so it was a bit tough,” Ko said. “It was disappointing to get three bogeys on my final four holes, but it’s good to finish the final hole with a birdie.”

Brooke Henderson, the 2015 and 2016 winner, was two strokes back at 70 with 57-year-old Laura Davies, Jeongeun Lee6, Ashleigh Buhai and Sung Hyun Park.

“It was tougher than I was expecting,” Henderson said. “It was very cold this morning, which I think played a huge factor, and also the wind has been pretty high. On a few shots really affected as well. I feel like all in all it was a good day. Nice to get in under par.”

The tournament, the LPGA Tour’s longest-running non-major event, was shifted to Oregon Golf Club in June because of safety concerns about a homeless encampment bordering Columbia Edgewater Country Club.

“You got to putt it well, because the greens are magnificent,” Davies said. “They’re incredibly fast. I putted really lovely on the front nine and then missed three short ones on the back nine, which was a bit disappointing.”

Me vs a 23 handicapper… with a twist!
Explanar Golf Lesson: Hit Longer Drives. Case study on how to add 30 yards in 30 minutes
Jordan Spieth says his cliff shot at Pebble could have been worse … but not for the reason you think
Will Zalatoris: Saudi waiver denial was ‘perfect response’ by PGA Tour | Golf Today | Golf Channel
‘It’s time,’ Larry Mize says of making the upcoming Masters his last