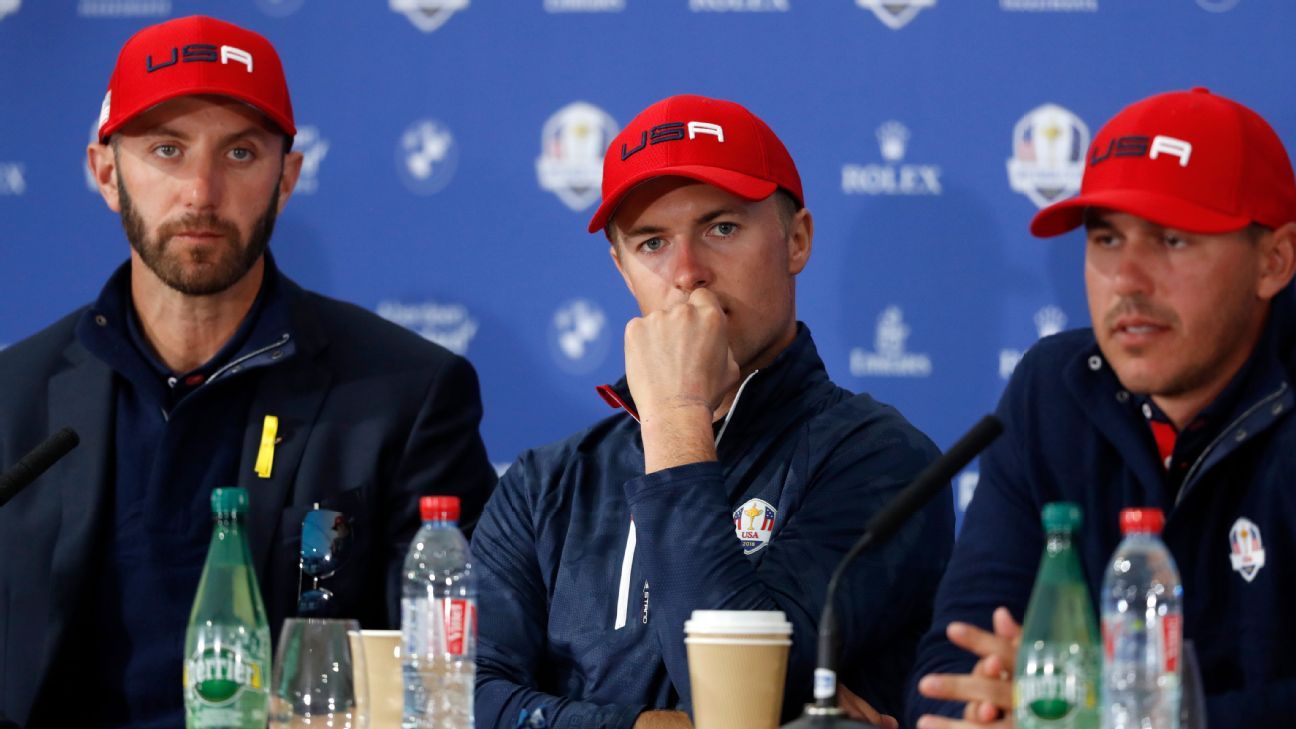 SHEBOYGAN, Wisc. — Brooks Koepka and Bryson DeChambeau are unlikely to sit together, eat together or chit-chat together this week at the Ryder Cup. But what if they played together? Would the previously derisive “Brooksy” chants from the gallery then be considered complimentary?

As silly as all that sounds, that is where we are as the Americans try to beat Europe for one of the rare times, having lost nine of the last 12.

The long-time narrative is once again in play: Can the U.S. put aside any so-called differences, bond as a team as Europe has seemingly done, and prevail?

Does any of it even matter?

“Honestly, at the end of the day, the captains and assistants will take care of all that,” said Patrick Reed, who was asked about the controversy before his own issues surfaced that caused him to miss out on a captain’s pick. “It’s 12 going out there and playing golf. Whether they can’t stand each other, whether they like each other, whatever it actually is, they don’t want to lose a point because of stuff like that.

“They’re not going to let it bother them. They’re going to go out and play, and play the best they can and try to bring the Cup home.”

But with the U.S. Ryder Cup team, nothing is ever easy.

Koepka and DeChambeau’s feud dates back more than two years and surfaced again after the PGA Championship this year when unaired video surfaced of Koepka getting distracted and rolling his eyes on camera as DeChambeau was walking past him, complaining about how things had just gone in the second round at Kiawah Island.

That sparked a summer of seemingly never-ending issues. It was enough for U.S. captain Steve Stricker to call each player individually and ask that they put their differences aside.

“Once they get on that team together, they’re going to be rooting for each other,” said Keegan Bradley, who played for the U.S team in 2012 and 2014. “They’re going to want each other to do well. My guess is it’ll kind of be the joke of the team in the locker room. Everybody will be ribbing them. I think it’ll be good for everybody.

“I think it is overblown,” Bradley added. “At least the teams I was on. Everyone was so close. You start these lifelong friendships and respect for each other. It was so fun to be on a team. It was special.”

The European side has long been lauded for this. It started with a chip-on-the-shoulder attitude in the early 1980s when Tony Jacklin became captain for a four-Cup run (he went 2-1-1) and demanded basic necessities that he felt were lacking for a side accustomed to getting trounced.

Another important factor: The Ryder Cup is a huge financial necessity for the European Tour, and directly contributes to subsidizing purses. European players — who are required to be members of the Tour in order to be eligible for the team — feel their success contributes to that Tour’s bottom line.

That is not a factor for the U.S. players, who are members of the PGA Tour — which doesn’t run the Ryder Cup. The PGA of America enjoys the financial riches of the event. No players on either side are compensated.

Fair or not, an entire storyline has developed at times that suggests the American players are simply not as invested.

“You want a cohesive team room and I think those little bits … that’s where the U.S. team has been criticized in the past for not getting that part of it right,” said Justin Rose, who has played in five Ryder Cups for Europe but won’t be a part of the festivities this week. “You don’t want these guys to come in and create that. I think the U.S. team has done a brilliant job. There is fresh blood in there. Guys like J.T. (Justin Thomas), Jordan [Spieth], they’re tight and I think that new crowd of guys have really changed the dynamic in the U.S. team room for sure.

“I don’t think it’s ever been a problem. I think it’s more of a media kind of ‘make reasons’ for something. But the Europeans have been forced to be a little more into it. I don’t know the goings on there except the social media stuff which I think has been hammed up. I think they’re both probably quite enjoying that. Maybe that’s good for them at the moment in sort of a weird sort of warped way. Drama sells.”

It doesn’t necessarily help win, however. There was U.S. drama in Paris three years ago when Reed felt slighted by not being paired with Spieth, a successful partner in 2014 and 2016.

Reed had a terrible Ryder Cup, going 0-2 with Tiger Woods as his partner before a singles victory when the U.S. was well out of it. He then had a poor presidents Cup, going 1-3. (Reed had bilateral pneumonia just three weeks ago, one of the reasons cited for him not getting a pick this time.)

Koepka recently created more fodder when he said in a Golf Digest interview that the Ryder Cup daily schedule takes him out of his usual comfort zone, one that has served him well in winning four major championships.

“We’re just so individualized, and everybody has their routine and a different way of doing things and now it’s like, OK, we have to have a meeting at this time or go do this or go do that. I can barely see my (personal) team,” he said. “It’s hard to even go to the gym. There’s no time to do that at the Ryder Cup. There’s no time to decompress.”

Koepka, who was dealing with a wrist injury suffered at the Tour Championship when he hit a tree root during a swing in the third round, was the only player out of 12 who did not attend a two-day practice session at Whistling Straits last week.

Then again, Koepka, at 4-3-1 in two Ryder Cups, is one of the few players on the U.S. side with a winning record. And he’s got the type of game and personality that seems perfect for the Ryder Cup.

“I’m a fan of both players (Koepka and DeChambeau) and I just feel like it’s going to be one or the other,” said 2008 U.S. Ryder Cup captain Paul Azinger. “They’re going to put the weight of the team on their shoulders or they’re going to be a pain in the neck.”

It was Azinger who employed the “pod system” that helped the U.S. team to victory at Valhalla. He reasoned that like-minded individuals who get along and can get their games to jell was the best approach, when a player can have no more than four partners in the team sessions anyway and was likely to have just one or two.

He divided his team into three pods of four players each, and the pairings all came from that. The U.S. has varied from that approach at times, but has used versions of it in recent years. Look for Koepka and DeChambeau to be in separate pods.

For that matter, Patrick Cantlay is unlikely to be in the same one as DeChambeau, and it’s possible Koepka — whose friendship with Dustin Johnson has frayed — may be separated from D.J. as well.

“One of the things I love about the Ryder Cup, in the European locker room you see how everyone takes their armor away and puts it away for that week,” said Sergio Garcia, who will be playing in his ninth Ryder Cup and has been on six winning sides. “Even with the friends you have on tour, you don’t see it too often. It’s great. Some of my best friends on tour, I’ve made at Ryder Cups.”

Nobody ever said they had to be friends, but can Koepka and DeChambeau put aside their differences for one week? If not, it’s going to be a long week in Wisconsin.