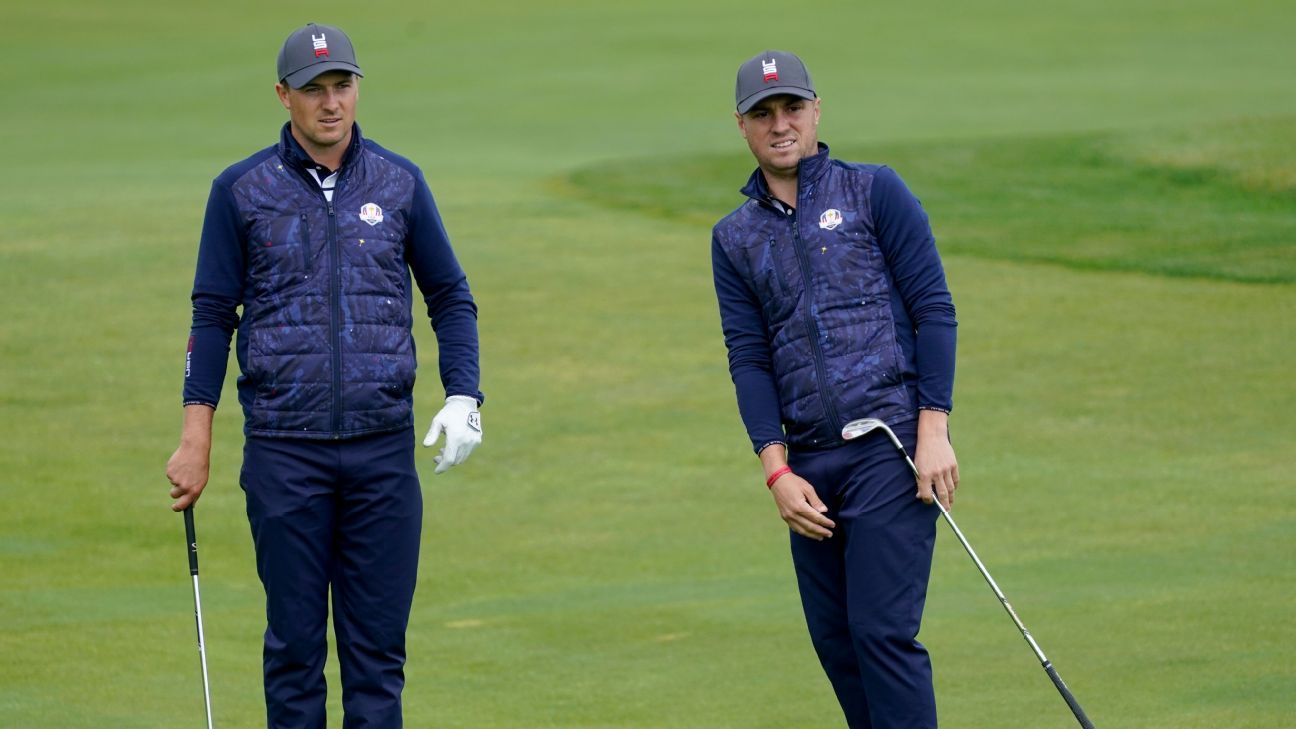 SHEBOYGAN, Wis. — After a one-year delay because of the COVID-19 pandemic, the 43rd Ryder Cup is finally here for an American team that is trying to end two decades of frustration.

The Friday morning foursomes matches, in which players alternate until the hole is completed, include a heavyweight bout right out of the gates at Whistling Straits, as well as a couple of intriguing selections from European captain Padraig Harrington, who went heavy on experience.

The foursomes will be followed by four-ball (best ball) matches on Friday afternoon.

Europe has won four of five and nine of the past 12 Ryder Cups. It needs 14 points to retain the Cup while the Americans need 14.5 to win it.

Here is a look at Friday morning’s foursomes matches:

America’s top team will face Garcia, Europe’s all-time points leader, and Rahm, the No. 1 player in the world. Former U.S. captain Jim Furyk broke up the successful duo of Spieth and Patrick Reed in Paris in 2018 so he could pair Spieth with his childhood friend, Thomas. The Spieth/Thomas combination was one of the few bright spots for the Americans three years ago, when the pair went 3-1 as a team in the United States’ loss.

The all-Spanish duo of Rahm and Garcia will be a formidable opponent and might rekindle memories (or nightmares for the Americans) of the late Seve Ballesteros and Jose Maria Olazabal, the most successful Ryder Cup partnership for the Europeans. Both Garcia and Rahm are highly competitive and emotional. Rahm might have a big chip on his shoulder after being snubbed by his PGA Tour peers for player of the year honors, which went to Patrick Cantlay.

Garcia, 41, had only four top-10 finishes in 24 tour starts this past season. His form has been better lately; he tied for sixth at the BMW Championship and tied for 14th at the Tour Championship. Garcia’s putting — he ranked 173rd in shots gained putting on tour — might be a liability. Garcia has earned 25.5 points in his Ryder Cup career and much of his damage has come in foursomes. He is 10-4-3 in such matches while playing with eight different partners.

It’s a battle of veterans and rising stars from both teams. Given the influx of youth in the American team’s makeover, Johnson, 37, is the oldest player, while Morikawa, 24, is one of six U.S. rookies. Casey, 44, is playing in his fifth Ryder Cup, while Hovland, 24, is one of the rising stars in the world.

The American duo features one of the game’s longest hitters, Johnson, who ranked seventh in driving distance (312.9 yards), and perhaps the game’s best ball striker, Morikawa, who ranked first in shots gained on approach this past season. DJ is playing in his fifth Ryder Cup, and he is just 1-3 in foursomes. His lone victory came at Hazeltine in 2016, and he and his teammates lost both of their foursomes matches in Paris. DJ’s form hasn’t been great since he won his first green jacket at the Masters in November, and it might not be a good sign that he was back on the practice range after Thursday’s opening ceremonies.

Morikawa will be playing his first Ryder Cup match, but big stages haven’t bothered him so far. He won his first major in his PGA Championship debut, and then won his second major — The Open — in his eighth start in a major. He suffered a lower back injury at the Olympics, which bothered him during the FedEx Cup playoffs, but says he has recovered and is ready to go. If DJ’s driver is erratic again, Morikawa might have to do some heavy lifting.

Casey went 1-1-1 in matches in Paris after going a decade between Ryder Cup appearances. In his previous four appearances, the Englishman earned at least a half-point in nine of his 12 matches. Harrington said every player on his team wanted to play with Hovland, the first Norwegian to compete in the event, because of his personality and game. He doesn’t yet have Morikawa’s results but is every bit as talented. He ranked sixth in birdie average (4.40) and ninth in shots gained total (1.316) on tour this past season. He was an exceptional match player as an amateur and college player at Oklahoma State.

It’s a matchup of former Florida State teammates against two Englishmen separated by 21 years in age. On paper, at least, the Americans should have a big advantage off the tee with Koepka’s length. He ranked 12th in driving distance (310.7 yards), while the other three players were 99th or worse.

Koepka, a four-time major champion, spent the past few weeks recovering from a wrist injury that he aggravated when his club hit a tree root at the Tour Championship. He had surgery on his right knee on March 16 to repair a dislocated kneecap and damaged ligaments. Koepka has said he’s ready to go. Stricker wouldn’t be rolling him out in the Friday morning session if he didn’t look good.

Berger, another rookie, scored the winning point in the Americans’ victory over the International team in the 2017 Presidents Cup at Liberty National. A great irons player, Berger is a four-time winner on tour and a “gutsy player,” according to Stricker.

Westwood, 48, is England’s elder statesman. He is making his 11th Ryder Cup appearance, which ties Nick Faldo for the most by a European player. He has earned 23 points at the Ryder Cup and is 9-5-4 in foursomes. His form hasn’t been great since a March heater, in which he had back-to-back runner-up finishes at the Arnold Palmer Invitational and the Players Championship. Fitzpatrick is making his second Ryder Cup appearance after failing to earn a point at Hazeltine. It might be Westwood’s final Ryder Cup, so he won’t go quietly, but the Americans have too much firepower.

Cantlay and Schauffele, two California natives, are both Ryder Cup rookies. They teamed up to win both of their foursomes matches at the Presidents Cup in Australia in 2019. They’re close friends and played together in the Zurich Classic, another team event.

Perhaps only Rahm played better than Cantlay this past season. He won four times, including two victories during the FedEx Cup playoffs, taking down Bryson DeChambeau in a six-hole playoff and then winning the Tour Championship. Schauffele has six top-5 finishes in the majors, including a share of third at this year’s Masters, and won a gold medal at the Tokyo Olympics. He’ll be ready for this stage, too.

Poulter and McIlroy went 1-1 in foursomes in Paris, defeating Bubba Watson and Webb Simpson and falling to Spieth and Thomas, 4 and 3. Poulter is the heart and soul of the European team, but his game hasn’t been great for a while. Once again, he’ll have to find the magic that has made him a thorn in America’s side at the Ryder Cup. McIlroy led the tour in birdie average but couldn’t avoid big numbers. He was 5-4-1 in foursomes in his previous five Ryder Cup appearances.

Henderson stalls, still leads by 3 in LPGA opener
Worst shots from challenges | 2021
Rory McIlroy highlights from his course-record 61 at Wells Fargo
Luke Donald’s Mizuno MP59 Titleist CB Forged Irons
Rahmbo is on a rampage in Farmers with Sam Ryder directly in his sights