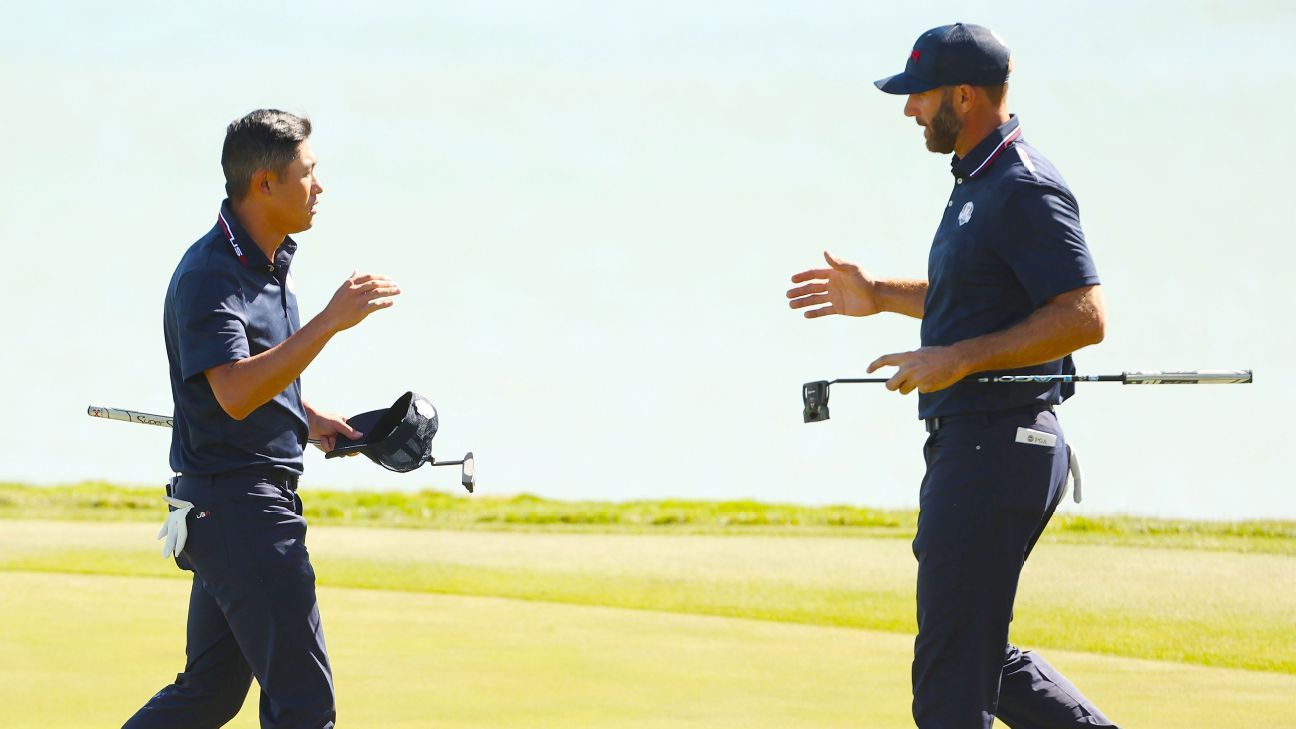 SHEBOYGAN, Wis. — The feistiness that gives life to the Ryder Cup returned in a couple of notable instances Saturday, ratcheting up the intensity and leading to some head-shaking reactions.

But the result was more of the same.

Europe looked to close the gap at Whistling Straits but in the end won just one of the foursome matches and saw its deficit widen by two more points, making what was already a crucial afternoon session even more important.

With 12 of the 28 points decided, the U.S. leads 9-3, with the team of Jon Rahm and Sergio Garcia getting the only point for the Europeans. And even they needed to overcome a three-hole deficit to get that win over Brooks Koepka and Daniel Berger.

“We need more,” Garcia said. “What we did is not enough. Not in the situation we are in.”

The U.S. won the session 3-1 for the third straight time to increase its lead to a whopping six points. With 16 points remaining, Europe needs to win 11 of them to forge a 14-14 tie and retain the Ryder Cup. The six-point lead through three sessions is the largest for either side since the Americans led by that much over Great Britain & Ireland in 1975.

“It’s obviously really important,” said Dustin Johnson, 37, the oldest member of the U.S. team and the one with the most experience in his fifth Ryder Cup. “Even though we had a nice lead after yesterday, played really well, there are still eight points today. You’ve got to come out and get off to a good start. We’re just trying to win each session and keep that lead.”

Every match made it to at least the 17th hole. But aside from the first match, the Europeans could not overcome the Americans to make the move they needed.

That doesn’t mean the session lacked entertainment. Justin Thomas and Koepka made sure of that.

Thomas questioned a short putt he was forced to hole by seeing if it was within the leather — the typical sign that it is a gimme. Meanwhile, Koepka got heated over a rules issue, using an expletive to chide the two officials who would not give him relief on the 15th hole.

For a time, it appeared Europe might narrow the advantage. When Rahm and Garcia rallied, the teams of Viktor Hovland/Bernd Wiesberger and Lee Westwood/Matt Fitzpatrick were very much in their matches.

But they could not hang on. Jordan Spieth and Thomas rallied to overtake Hovland and Wiesberger, coming back from 3 down to lead for the first time at the 15th hole on the way to a 2-up victory.

With Spieth’s victory, it means all 12 Americans have contributed at least half a point. Spieth and Thomas are now 4-2 all time in the Ryder Cup as a team.

In the final match, Xander Schauffele and Patrick Cantlay turned an early deficit into a 3-up lead through 11 holes before going on to a 2 and 1 victory. Schauffele, a Ryder Cup rookie, is 3-0.

The afternoon four-ball will see Tony Finau and Harris English take on Shane Lowry and Hatton at 1:26 p.m. ET, followed by Koepka and Spieth against Rahm and Garcia at 1:42. The third match is Bryson DeChambeau and Scottie Scheffler against Tommy Fleetwood and Hovland. Saturday’s final match pits Johnson and Morikawa against Rory McIlroy and Ian Poulter.

Thomas, Berger, Cantlay and Schauffele are sitting for the United States, meaning only Johnson will play all five matches.

For Europe, Casey, Wiesberger, Fitzpatrick and Westwood will skip the afternoon session. That means Rahm and Hovland will be the only players to compete in every session for Europe.

This club pro has a spot in the PGA Tour’s next $20 million ‘designated’ event. Can Michael Hopper cash in?
INCREDIBLE tee shot from Juan Postigo! 👏
Best shots on the PGA TOUR in 2019 (non-majors)
Ryder pulls away, Rahm heats up at Torrey Pines
THE most FRUSTRATING yet REWARDING game – Worst Ball Vlog