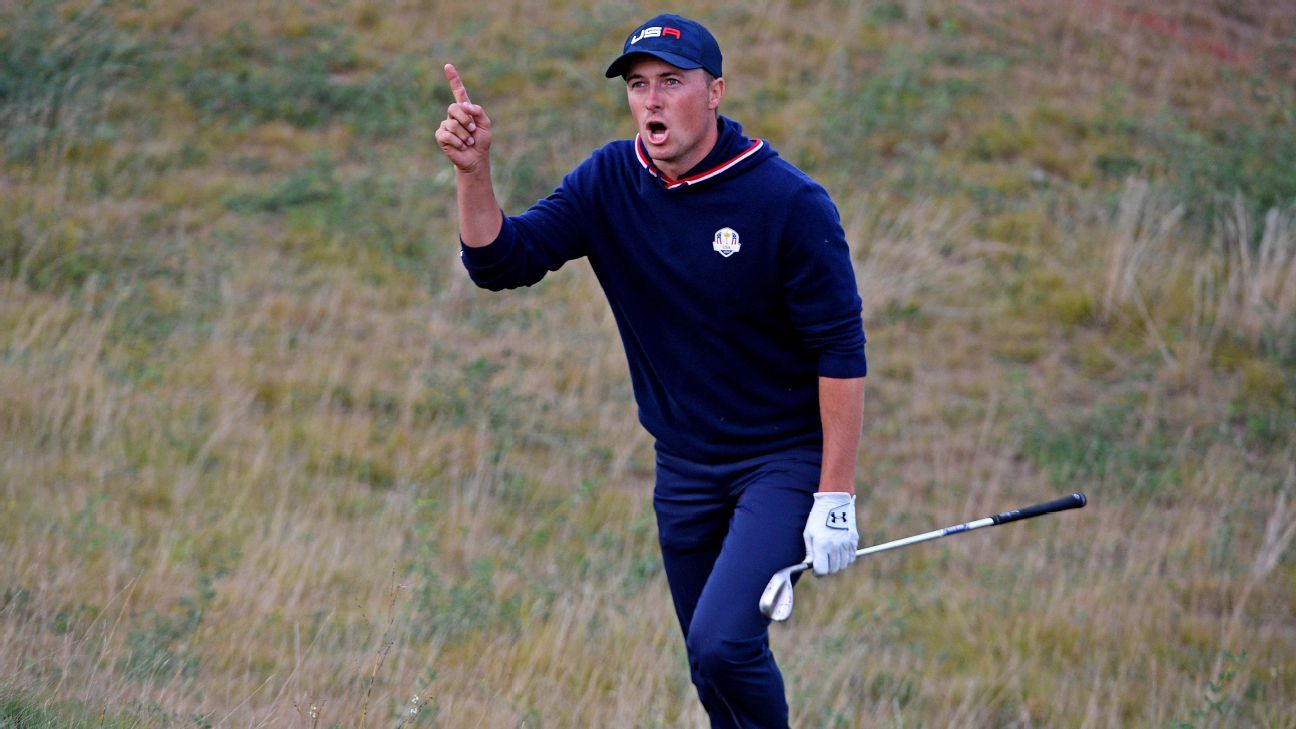 SHEBOYGAN, Wis. — After taking it on the chin from the Europeans in the Ryder Cup for much of the past two decades, the stage is set for the U.S.

With an 11-5 lead heading into Sunday, the U.S. team needs only 3.5 points in 12 singles matches to reclaim the Ryder Cup. It’s the largest lead heading into singles play since Europe had the same advantage in 2004 and the biggest for the Americans since a nine-point lead in 1975. No team has ever come back from more than four points down on the final day.

The Americans are seeking back-to-back Ryder Cup wins on American soil for the first time since winning at The Greenbrier in 1979 and PGA National Golf Club in 1983.

Here is a look at the singles matches and the big climb ahead for Europe:

Schauffele, a two-time runner-up in major championships and an Olympic gold medalist, has performed exceptionally well on another big stage with a 3-0 record as a Ryder Cup rookie. According to research from ESPN Stats & Information, his three victories are the most by a captain’s choice since they were introduced in 1989. If Schauffele beats McIlroy, his four points would be the most by a U.S. captain’s choice.

It has been a forgettable Ryder Cup for McIlroy, to say the least. He was expected to be one of the stars of the European team, but instead has gone 0-3 and was held out of a session for the first time in his career. He lost two matches on the same day for the first time on Friday.

Cantlay, the reigning FedEx Cup champion and PGA Tour Player of the Year, is 2-0-1 in his Ryder Cup debut. His game has grown tremendously over the past 18 months. Look for the former UCLA star to be a major champion soon.

He’ll face a fierce competitor in Lowry, who won The Open at Royal Portrush in 2019. He is one of the best European players in windy conditions. Why European captain Padraig Harrington didn’t play him in more than two matches might be questioned when it’s over. Lowry drained an 11-foot par putt on the 18th hole of Saturday’s four-ball match to hold off Harris English and Tony Finau.

Rahm is the No. 1-ranked player in the world and has certainly played like it at Whistling Straits. If not for the steady play of Rahm and fellow Spaniard Sergio Garcia, the Europeans’ six-point deficit would be even larger. Rahm is 3-0-1 and his 3.5 points are the most by a reigning world No. 1 at a single Ryder Cup. He has accounted for 70% of Europe’s points — the highest percentage by any player entering the singles session since 1979. Rahm took down Tiger Woods 2 and 1 in his first singles match in Paris in 2018.

Scheffler, 25, doesn’t yet have a PGA Tour victory, but he’s one of the game’s rising stars. He’ll need everything he has to defeat Rahm, who has been better than everyone in the world for the past year. Somebody had to play him, and Scheffler apparently drew the short straw.

DeChambeau was the longest hitter off the tee on the PGA Tour last season, but Garcia is also sneaky long, even at 41. Garcia ranked tied for 16th in driving distance with a 309.4-yard average and he has a large advantage in Ryder Cup experience.

Garcia has won 25 career matches, the most in Ryder Cup history — two more than Nick Faldo and three more than Arnold Palmer. His 28.5 points are also the most in the event’s history. DeChambeau earned his first full point in Saturday’s four-ball matches. Garcia is 4-4-1 in singles matches, but he is 3-0-1 in his past four.

The first Norwegian to compete in the Ryder Cup, Hovland is probably going to be one of the stars of the European team for years to come. He is one of the most talented young players in the world, even if his 0-3-1 record this week might not reflect it. He is one of the best ball strikers in the world and will win big in the not-too-distant future. His putter let him down at times over the first two days here.

Johnson, the No. 2 player in the world, has rediscovered his form in a big way after a not-so-great 2021 season. He is the first American to enter singles with a perfect 4-0-0 record since 1979, when both Larry Nelson and Lanny Wadkins did it. He is firing on all cylinders and will be difficult to beat.

It has been a very disappointing performance for Casey, whom the Europeans could historically count on to earn at least a half-point in his matches. He is 0-3 so far this week. Casey is 1-1-2 in singles matches at the Ryder Cup; his last victory came against Jim Furyk at The K Club in 2006.

There were questions about whether Koepka wanted to be here — he blamed the media for putting a negative spin on his comments about Ryder Cup week being hectic — but he has been thoroughly engaged. He probably isn’t thrilled about his 1-2 record and might be looking to take out his frustration on Wiesberger, the first Austrian to compete in the Ryder Cup and the lowest-ranked player in the Official World Ranking on either team. Koepka is 1-0-1 in singles at the Ryder Cup.

Finau, a captain’s choice, really seems as excited to be here as any player in the field. He played better on Friday than he did on Saturday. He’ll try to hand Poulter his first singles loss at the Ryder Cup. It might be Poulter’s last appearance as a player in the event. Since 2004, Poulter, 45, has defeated Dustin Johnson, Webb Simpson (also tied him), Matt Kuchar and current U.S. captain Steve Stricker. The heart and soul of the European team, Poulter might be an assistant captain in Rome in 2023 and captain at Bethpage Black in 2025.

Thomas cares about the Ryder Cup as much as any other player. He’s probably not satisfied with his 1-1-1 record this weekend. He went 4-1 in Paris in his debut and beat McIlroy 1 up in singles. Hatton, a fiery Englishman, has fared better than most of his teammates with a 1-1-1 record this week. He sank a putt on the 18th hole to tie a four-ball match on Friday and then teamed with Shane Lowry to win a four-ball match on Saturday. Hatton lost to Patrick Reed 3 and 2 in his singles match in Paris. Thomas’ putting will have to improve for him to take down Hatton.

It’s English against an Englishman. English, a U.S. rookie, was 1-1-0 in foursomes and four-ball matches. Westwood, 48, is the oldest player on Europe’s team and this will likely be his last Ryder Cup match. His 11 appearances at the Ryder Cup are tied with Nick Faldo for the most by a European player. Westwood has won 23 points in his career, but not much of his damage has come in singles, where his record is 3-7. He’s 0-2 this week and another loss would give him 21 in his career, which would tie Neil Coles (1961-77) and Christy O’Connor (1955-73) for most by a European player. That’s what happens when you play in the Ryder Cup so often.

Spieth’s putter has let him down for much of the weekend, which is why he has a 1-2 record going into singles. He has never won a singles match in the Ryder Cup or Presidents Cup. He’s a combined 0-6. One of the heroes of the European team’s 17.5-10.5 victory in 2018, Fleetwood has failed to earn a full point this year. He is 0-1-1. In Paris, he earned four points by going 4-1. After winning each of his four matches in foursomes and four-balls with Italy’s Francesco Molinari, Fleetwood lost to Tony Finau 6 and 4 in singles three years ago.

Berger, one of the best ball strikers in the game, is 1-1 in his first Ryder Cup. Fitzpatrick is still searching for the first point in his career. The Englishman went 0-2 in his Ryder Cup debut at Hazeltine in 2016 and he’s 0-2 this week. He’ll attempt to avoid going 0-5 on Sunday in singles play. According to ESPN Stats & Information research, only four players have ever played in multiple Ryder Cups and not earned at least a half-point. Each of them represented Great Britain and Ireland before European countries were added in 1979: Tom Haliburton (1961-63), John Panton (1951-53, 1961), Alfred Padgham (1933-37) and Arthur Lacey (1933 and 1937).