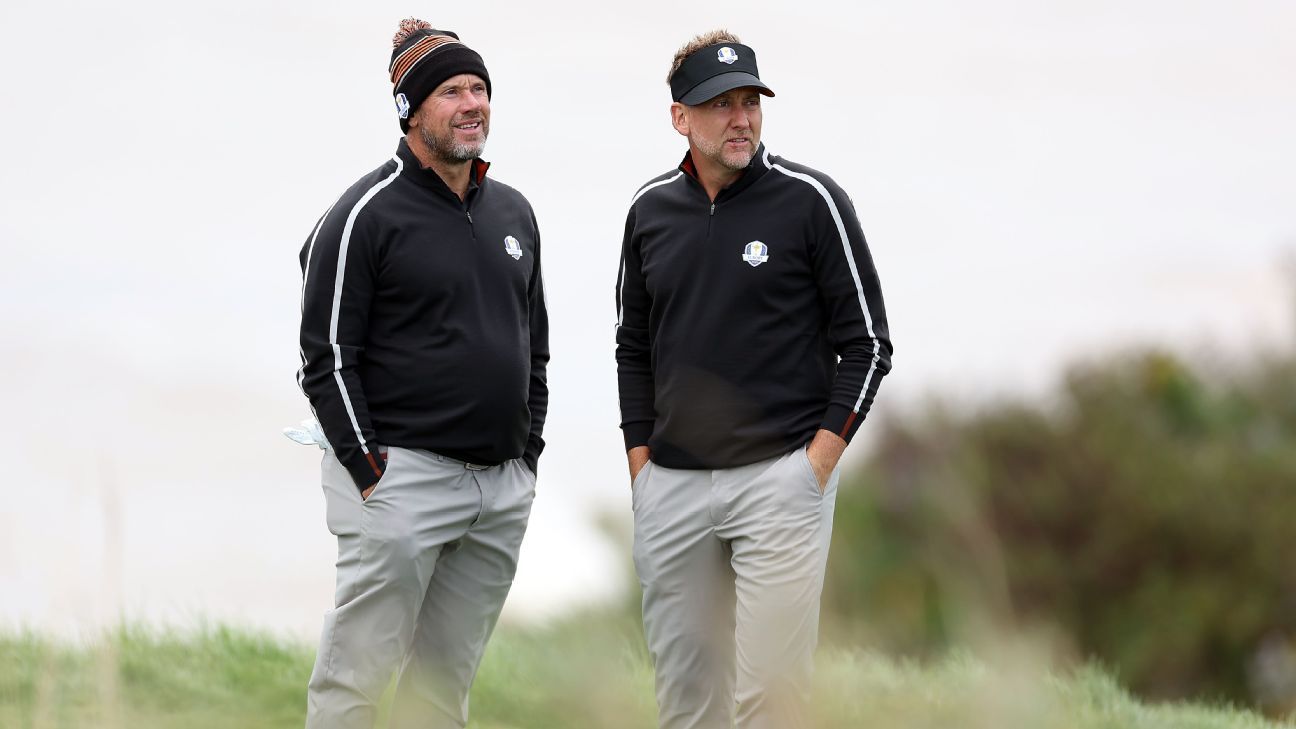 SHEBOYGAN, Wis. — As the United States team celebrated wildly around the 18th green after winning the Ryder Cup in a record-breaking 19-9 rout at Whistling Straits on Sunday, the 12 European players and captain Padraig Harrington sat on stools in a nearby tent for postmatch interviews.

With Queen’s “We Are the Champions” blaring from speakers on the course, Harrington was asked how the European team will counter the Americans’ injection of youth and talent moving forward, starting with the 2023 Ryder Cup in Rome.

Before Harrington could finish his answer, England’s Lee Westwood interrupted him.

“Not going to name me here, are you?” Westwood joked.

“Nor me,” England’s Ian Poulter added.

After this weekend’s historic loss, in which the U.S. team posted the most lopsided victory in the Ryder Cup’s modern era (since 1979), that’s the scary part for the Europeans. The average age of the Americans that will probably carry their team in the future — players like Patrick Cantlay, Bryson DeChambeau, Collin Morikawa, Dustin Johnson, Brooks Koepka and Xander Schauffele — is less than 30.

The Europeans might have their captains covered for the next 20 years, but there isn’t much coming down the pipeline of talent to adequately replace their aging stars on the course. The Daily Mail, a tabloid in London, might have summed it up best with this Sunday headline: “Get Used To It.”

“This is definitely different,” Cantlay said. “We have a lot of young guys, and I think they are going to be on teams for a long time. Everybody gets along. The atmosphere is light, but I know everyone has that killer instinct, and we are going to bring that to future cups.”

Unless the Europeans can persuade the U.S. team to change the Ryder Cup rules and let them have Australian golfers — or at least South African golfers — they are going to have to get better in a hurry over the next two years.

Unlike the Americans, the heart and soul of the European team — veterans such as Poulter, Westwood, Paul Casey and Sergio Garcia — are in their 40s.

“Listen, this match I played this afternoon, it might be the last match I’ve played in the Ryder Cup,” Westwood said. “I’d rather it wasn’t, but I’m 49 next April, and the likelihood is it is.”

Rahm, the No. 1 player in the world, will clearly be back in Rome in two years if he’s healthy. He was the second-youngest player on the European team at 26. Hovland, the first Norwegian to compete in the Ryder Cup, is already one of the game’s rising stars at 24. Matt Fitzpatrick, who is still searching for his first Ryder Cup point after two appearances, is 27. Tyrrell Hatton is 29. Rory McIlroy, Tommy Fleetwood, Bernd Wiesberger and Shane Lowry are in their 30s.

“There’s a good heart to the team,” Harrington said. “Everybody keeps going on about the experienced guys, but there is a really solid heart on this team of players who are still coming into their peak of their careers.

“There [are] a lot of guys in the middle of their careers now who should be moving on in their golf. They certainly haven’t peaked yet. Europe, yes, we would look to young guys coming in over the future, but the heart of this team will be here for a few more years, for sure. They haven’t got to their peaks yet, so we should see some strength going forward. There’s plenty of guys here.”

For the Europeans to close the talent gap in the future, one of two things needs to happen: A handful of players who competed in the Ryder Cup in the recent past need to regain their form so they can compete again or a small number of up-and-coming players need to develop fast.

Justin Rose, who is ranked No. 44 in the world, also might be back in Rome after he was snubbed for a captain’s selection this time. The 2013 U.S. Open champion wouldn’t have made a difference at Whistling Straits.

A half-dozen players who competed for Europe in the Ryder Cup since 2016 — Denmark’s Thorbjorn Olesen, Spain’s Rafa Cabrera Bello, Germany’s Martin Kaymer, Belgium’s Thomas Pieters and Wales’ Jamie Donaldson — also have fallen off their games. None is ranked in the top 100 players in the world.

If those players don’t come back, the Europeans will have to look to younger players who aren’t yet proven, such as France’s Victor Perez, Scotland’s Robert MacIntyre and Denmark’s Nicolai and Rasmus Hojgaard, 20-year-old twins, who won in consecutive weeks on the European Tour this summer.

After winning four of five and nine of the previous 12 Ryder Cup competitions before this one, Europe’s dominance is probably over. Now, the Europeans will have to figure out a way to beat a U.S. team that is much younger — and talented.

“There’s phenomenal talent on that team,” McIlroy said of the Americans. “A lot of young guys, and I think the most important thing for the U.S. team is a lot of young guys that are great players have bought into the Ryder Cup. I think that was probably missing in previous generations.

“But guys like Justin Thomas, Jordan Spieth, you know, the sort of heartbeat of that U.S. team, they really bought into the team aspect of Ryder Cups, Presidents Cups. And having guys like that on the team, yeah, they are going to be formidable opposition from now until I’m probably not playing Ryder Cups, whenever that is, in hopefully 20 years’ time.”