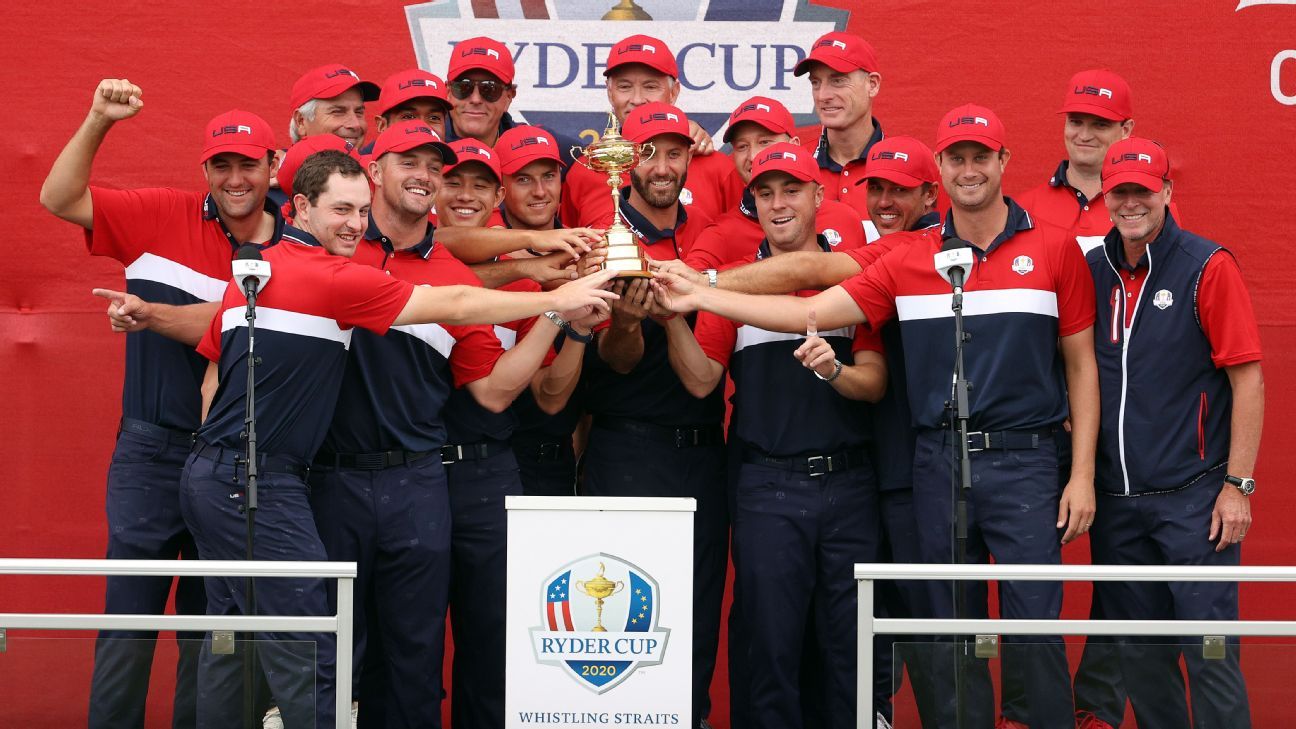 SHEYBOYGAN, Wis. — United States Ryder Cup captain Steve Stricker is a crier. It’s known enough that he gets considerable, good-natured grief about it. You could have made money if you bet the under on when the tears would start flowing during his opening ceremony speech.

He is one of golf’s good guys, a player who worked hard to win 12 times on the PGA Tour. He is such a good putter that he typically had others lined up for advice.

But beneath that nice-guy exterior is a fierce competitor. Stricker has been known to be tough on caddies and himself. He burns inside. And as it relates to the Ryder Cup, he’s been hardened by some excruciating losses.

Stricker played on losing teams in 2010 and 2012, the latter a stunning U.S. defeat where he went 0-4 in a one-point U.S. loss, the Europeans rallying from four points down on the final day.

After a final go as a player at the 2013 Presidents Cup, Stricker went all-in behind the scenes. He was an assistant in 2014, when Tom Watson‘s captaincy was widely panned. He was there for the victory in 2016 and the loss in 2018. But he also captained a winning Presidents Cup team in 2017 and assisted Tiger Woods‘ victory in 2019.

In other words, Stricker has seen a lot. Most importantly, he absorbed considerable knowledge, both good and bad, and figured out what not to do.

And along the way, he oversaw a transformation of the U.S. team, one that cruised to a record-setting 19-9 victory Sunday at Whistling Straits behind six rookie performers and three others who had played in the Ryder Cup just once. Even Brooks Koepka and Bryson DeChambeau hugged afterward, which says something.

“I woke up this morning and told the guys, let’s get to 20 points,” said Patrick Cantlay, who went 4-0 as a rookie, the best first-time U.S. appearance since Larry Nelson in 1979. “Because this is going to be the next era of guys for the U.S.”

Record-breaking or not, Cantlay is correct. A solid core of players is set to give the U.S. a formidable chance for the impending captaincies of Phil Mickelson and Tiger Woods and others who might be in the mix to guide U.S. teams.

Among the key things Stricker picked up from considerable negativity surrounding U.S. fortunes in the Ryder Cup: youth is better than experience; getting players who fit the golf course is key; adding those who mold into specific partnerships is far more important than who is necessarily playing the best.

That’s why Stricker had no issues with bringing the most rookies to the Ryder Cup since the 2008 squad that also won. That happened to be Stricker’s first Ryder Cup as a player.

It’s why he wanted guys like Tony Finau, Scottie Scheffler and Harris English, long hitters who were well-suited to Whistling Straits, and perhaps better fits than a previously-strong Ryder Cup player such as Patrick Reed or Webb Simpson, who were not picked.

Scheffler also proved to be a capable partner for Bryson DeChambeau, a big talking point going into the matches because of all the controversies that have followed DeChambeau lately. And Stricker stuck with the partnerships he expected to be good, such as Cantlay/Xander Schauffele and Dustin Johnson/Collin Morikawa.

Perhaps the best thing for the Americans to take out of this is how bright things appear. While there are never guarantees — ever — at the Ryder Cup, the future looks incredibly promising.

Schauffele, Cantlay, Morikawa, Koepka, Finau, Justin Thomas and Jordan Spieth should be mainstays for years to come. That doesn’t include DeChambeau, who brings his own level of intrigue to the competition and — as he showed Sunday by driving the first green – can be a huge asset in the proper circumstances. And there’s no reason to believe Johnson — who went 5-0 — will taper off anytime soon.

Then you look to Europe, with an incredible run that had seen that side win nine of the previous 12 Cups. All of a sudden, it is showing some vulnerability. For years, the team relied on a succession of stalwarts, such as Seve Ballesteros, Nick Faldo and Bernhard Langer and Colin Montogmerie, who handed the reigns to Padraig Harrington and Lee Westwood and Ian Poulter and Justin Rose and many others.

It is telling that in 11 of the 12 singles matches Sunday, the U.S. had the higher-ranked player. And in the one it didn’t, Scheffler defeated No. 1-ranked Jon Rahm.

There is still Rory McIlroy, who had a poor Ryder Cup this time, but is only 32. And Rahm should be a force for years to come. Same with Viktor Hovland. Tommy Fleetwood went 4-0 with Francesco Molinari three years ago in Paris, but was not on his game this week. Shane Lowry gained valuable experience.

But that is not the same kind of firepower the U.S. team possesses. And it doesn’t include possible future additions such as Sam Burns, Will Zalatoris and Matthew Wolff, and perhaps the return of Patrick Reed.

“The U.S. team, there’s phenomenal talent on that team,” said McIlroy, who has played on just two losing European teams in six tries. “A lot of young guys, and I think the most important thing for the U.S. team is a lot of young guys that are great players have bought into the Ryder Cup. I think that was probably missing in previous generations.

“But guys like Justin Thomas, Jordan Spieth, the sort of heartbeat of that U.S. team, they really bought into the team aspect of Ryder Cups, Presidents Cups. And having guys like that on the team, are going to be formidable opposition from now until I’m probably not playing Ryder Cups, whenever that is, in hopefully 20 years’ time.”

A dominant performance by @RyderCupUSA! I can’t wait to see and celebrate with all of you! Congrats to all the players, Vice Captains and of course Captain @stevestricker. pic.twitter.com/Xc0AsFzet2

Stricker was there that cold night in Scotland seven years ago when Phil Mickelson shockingly criticized Watson’s captaincy at Gleneagles in front of the legendary eight-time major champion. Mickelson has since apologized to Watson and has maintained that he went too far. But the impact was still felt.

Mickelson and many others associated with the U.S. Ryder Cup effort became increasingly annoyed at the lack of a voice and the myriad obligations. They wanted a system to develop assistants and captains and a more collaborative effort.

A task force was formed with much ridicule, but it has generally worked. Stricker is a product of it. He has been part of all of these teams. Perhaps there was too much comfort after a 17-11 U.S. victory at Hazeltine five years ago.

With Spieth, Koepka and Johnson, that team showed a lot of promise. And yet, they were the only ones in Wisconsin, with several players, including Mickelson, Zach Johnson and Matt Kuchar nearing or at the end of their Ryder Cup run, and Reed not being chosen this time.

“I think [the task force] did work,” Stricker said. “We are learning as we go along still. And sometimes, to be honest, it’s just the other team that plays well and you can’t do anything about it. And there’s times where the captain has done everything right. I’ve seen that, too, and the players … we just haven’t gotten it done on the course.

“I think we are learning all the time as we continue to play these and we’ll learn some more after this week.”

Next up? Learn to win on the road. When the Americans arrive in Rome in 2023, it will have been 30 years since their last win in Europe.

“We needed to win this one and I think it was a massive stepping stone for this team and the group that we have here that have really known each other since almost back to grade school to continue to try to work hard to be on these teams to go over there,” Spieth said. “It’s one thing to win it over here and it is a lot easier to do so and it is harder to win over there.

“If we play like we did this week, the score will look the same over there in a couple years. That’s what we’re here for.”

If Stricker is there, it will be in the background, but with his voice carrying plenty of weight.

“This is a new era for USA golf,” Stricker said.

Of course, he was in tears.

How To Break 90 In Golf – The Truths
Rory McIlroy has been on just as much of a heater as Jon Rahm, according to this crazy stat
STOP DUFFING your Golf Shots in 15 SECONDS
3 Tips To Instantly Improve Your Putting | Bryson DeChambeau
Driver vs Iron – The Set Up Explained In 30 Seconds! #shorts #golf