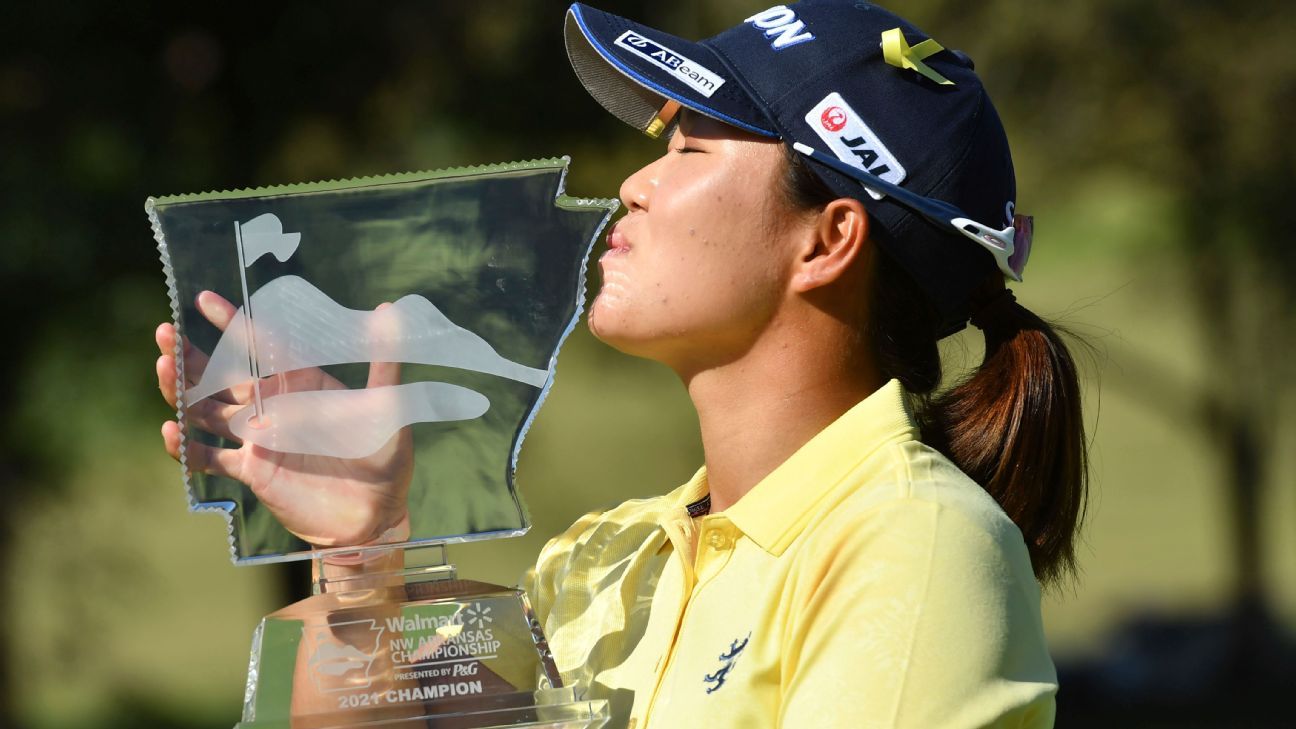 ROGERS, Ark. — Nasa Hataoka survived a nervy finish for a one-shot victory over Minjee Lee and Eun-Hee Ji on Sunday in the Walmart Northwest Arkansas Championship.

Hataoka, a 22-year-old from Japan, shot a final-round 4-under 67 to finish at 16-under. She three-putted the par-5 18th hole after reaching the green in two, having to make a 3-footer for par after rolling her first putt 15 feet past the hole.

Lee, one shot back in the same group, ripped a long drive down the center, but went with a 5-iron from 196 yards that finished well short of the elevated green. Her pitch shot up the hill left her about 16 feet for birdie and that failed to drop.

Ji, who eagled the par-5 14th to pull herself into contention, hit her second shot on 18 into a bunker behind the green. She putted out of the bunker to 3 feet below the hole and made that birdie to finish tied for second.

Lee, tied for the lead with Hataoka to start the day at 12-under, shot a final-round 68, while Ji closed with a 67.

Hataoka, who won her fifth title on the LPGA Tour, had her first victory in this event in 2018. She was 5-under and 17-under overall through 12 holes before tugging her second shot left and long on the par-4 13th hole. She chipped back up the hill some 50 feet past the hole. Her par putt was racing when it slammed off the back of the cup, stopping a foot away and saving her at least a 15-footer coming back for bogey. It was one of only two bogeys she made in 54 holes.

“Overall I was solid all three days,” Lee said. “I missed a couple of birdie opportunities today that I probably should have made. Under the circumstances Nasa did play really well today. I’m just disappointed with my second shot on 18, but I still had a great week.”

Yuka Saso and Danielle Kang each closed with a 6-under 65 to tie for fourth at 14-under. Local favorite Stacy Lewis, who won this event in 2007 and 2014, shot a final-round 66 to move into a tie for sixth with Jin Young Ko.

I Found the Best Golf Club BUT Nobody Wants It
Worst shots from challenges | 2021
This 60 Year Old Ben Hogan Tip Will TRANSFORM Your Golf!
The Farmers Insurance Open finishes on Saturday again, and Justin Thomas jokingly makes the case for more short weeks
How To Get Better At Pitching – A Simple Guide