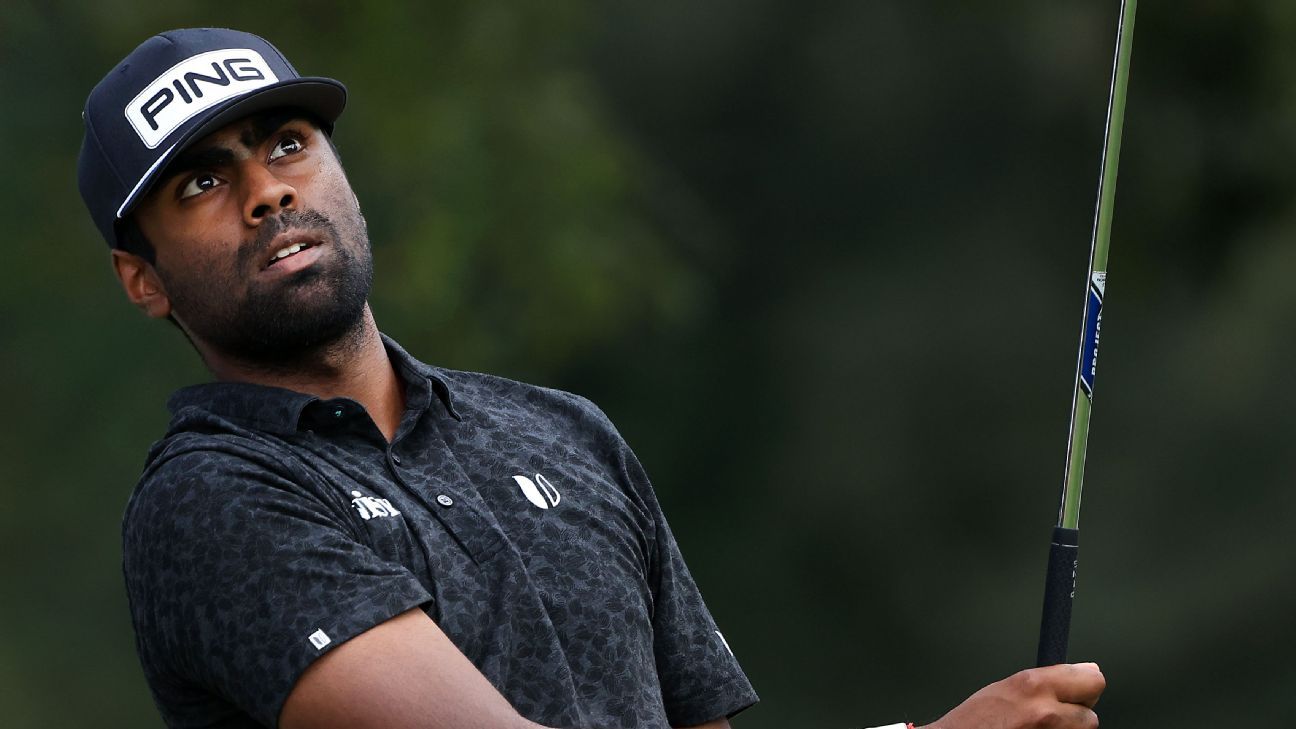 JACKSON, Miss. — In his first weekend contention on the PGA Tour, California rookie Sahith Theegala is handling the pressure and his golf just fine in the Sanderson Farms Championship.

Theegala began the back nine Saturday at Country Club of Jackson with three straight birdies, had an eagle chip spin 360 degrees around the cup and finished with a 5-under 67 to take a one-shot lead into the final round.

Cameron Tringale had a pair of eagles from long range with his putter and his wedge and matched his career best on the PGA Tour with a 62. He was one shot behind, along with Sam Burns and Denny McCarthy, who each shot 65.

“Definitely a little nerves in there for sure,” Theegala said. “But I think people have said before pressure is a privilege, and I’m trying to use those nerves to my advantage.”

Will Zalatoris, the rookie of the year last season while playing on unlimited sponsor exemptions, was tied for the lead with Theegala and Nick Watney. Zalatoris didn’t make a birdie over the final 12 holes. He shot 72 and fell five shots behind in a tie for 16th.

Watney took a late double bogey on the 16th hole and shot 71, leaving him four back.

Theegala was the consensus NCAA player of the year as a senior at Pepperdine, which was cut short by the pandemic. He had to bide his time between the Korn Ferry Tour and limited PGA Tour starts until making it to the big leagues with ease at the Korn Ferry Tour finals.

His brilliant back nine could have been even better. Theegala drove through the green on the reachable 15th and hit a beautiful pitch that somehow spun all around the cup without dropping, sending him to his knees in disbelief.

“I can’t wait to see the replay of that to see what happened because it literally looked like more than a 360,” Theegala said. “I didn’t have the greatest vantage point, but it was literally going right at the stick, and I’m like, ‘OK, that’s in, with good speed.’ I can’t believe that lip-out.”

Still, he has a chance to earn a two-year exemption and a spot in the Masters and PGA Championship next year if he can hold on.

The list of challengers includes Burns, who already won this year at the Valspar Championship and was in the final conversation to be a captain’s pick for the Ryder Cup.

Tringale is still looking for his first win in his 311st start on the PGA Tour. The 62 matched his low from the RSM Classic at Sea Island last November.

He wasn’t about to read too much into this one. He kept the ball in position and the greens are pure. Plus, Tringale holed a 55-foot eagle putt on the par-5 fifth hole, and then holed a bunker shot from 100 feet away on the par-5 14th.

“This was a combination of hitting a lot of good shots and having good breaks just on the same day,” Tringale said. “I did give myself a lot of chances. I was never out of position. I was putting uphill most of the time. And a (55-footer) and a hole-out, you know, if I three-putt that one and don’t get up-and-down, that’s four shots difference right there.”

But he has a chance in what figures to be a shootout.

Fifteen players were separated by four shots, and nine of those players have yet to win on the PGA Tour.

“You definitely have to get the breaks,” Burns said. “But also it just goes to show you how many talented players there are out here. I think with how bunched up it is there’s probably at least 20-something maybe more guys that could win tomorrow. So really it’s just going out there and trying to put a solid round together.”

Sounds like Cam Smith got down to business (literally) during the offseason getting his LIV team set for Year 2
Unluckiest golf shot EVER hit at St Andrews 🤯
An out-of-nowhere 63, as the weather turns and a major champ’s neck issues
Reed uses binoculars to ID ball stuck in tree
The Pebble Beach Pro-Am continues to struggle with weak fields. So where does the tournament go from here?