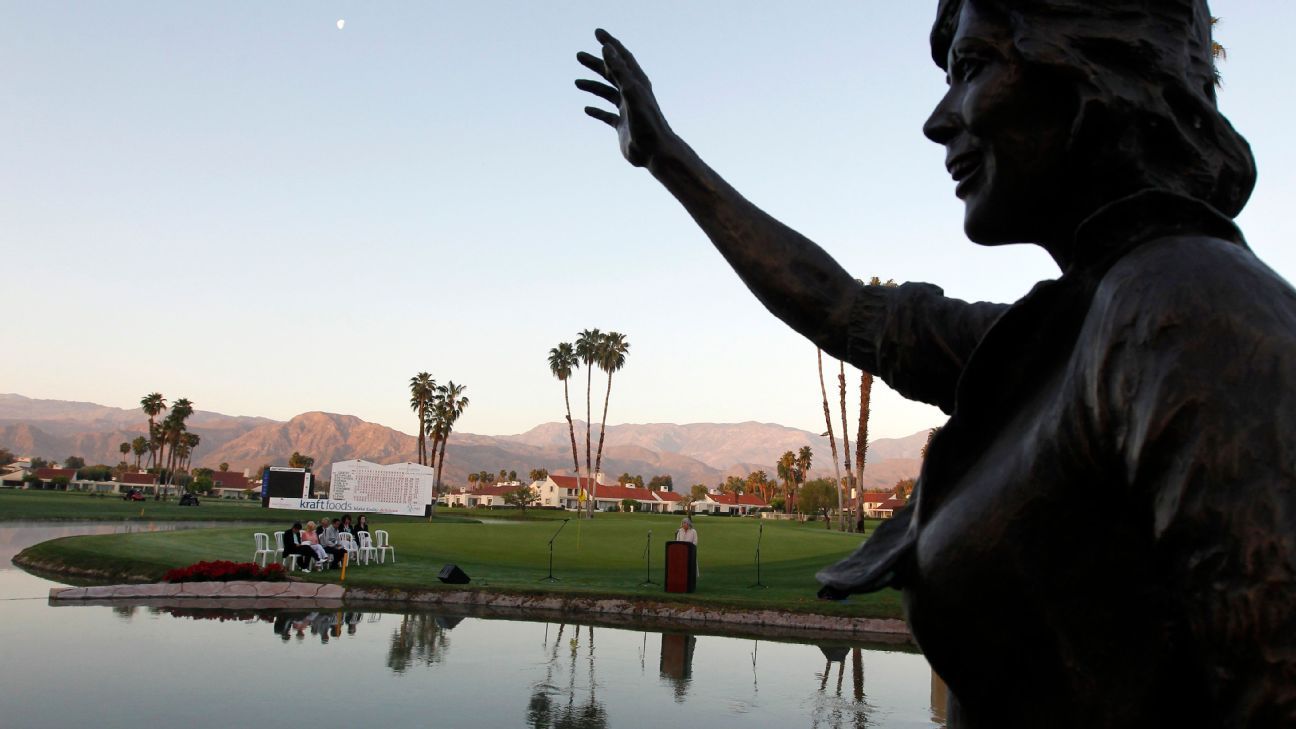 Next year will be the final leap into “Poppie’s Pond,” ending 40 years of the only LPGA major held on the same course and still known in some corners simply as the Dinah Shore.

The LPGA Tour announced Tuesday that Chevron is taking over as title sponsor of the year’s first major starting in 2023 with plans to move it from the California desert to company headquarters in Houston.

It would replace the ANA Inspiration in a six-year deal. Japan-based ANA has been title sponsor at Mission Hills in Rancho Mirage, California, since 2015.

The tournament celebrated 50 years at Mission Hills in April. It was designated a major in 1983, and it was Amy Alcott in 1988 who jumped into the pond around the 18th green to begin perhaps the most famous tradition in women’s golf.

LPGA Commissioner Mollie Marcoux Samaan spoke of building new traditions, and while key details are still to be worked out, the loss of so much tradition comes in exchange for a better date, improved television and a larger purse.

“This partnership will be a game-changer for the LPGA in so many ways,” Marcoux Samaan said in a conference call. “It will allow us to elevate this major championship to new heights.”

One of the key pieces of the puzzle is where the Chevron Championship will be played. Ed McEnroe of IMG, which runs the tournament, said it likely would be in the Houston area.

The U.S. Women’s Open was played last December at Champions Golf Club, the home of Jack Burke Jr. and previous host of a U.S. Open, Ryder Cup and the Tour Championship on the PGA Tour. Chevron is also said to be exploring Carlton Woods.

Marcoux Samaan said the Chevron Championship would have dedicated network coverage (the ANA Inspiration was on Golf Channel). Also key is moving it off the date one week before the Masters, especially with the recent addition of the Augusta National Women’s Amateur. That’s also the Final Four weekend in NCAA basketball.

The commissioner said it would remain the first major of the year, suggesting a late spring date.

“In the short term, our absolute focus is on making sure the next ANA Inspiration is truly a fitting, final celebration for what will be 61 years of incredible history, fantastic golf drama and wonderful partnerships in Rancho Mirage,” McEnroe said.

Marcoux Samaan said she had only just begun to share the change with the players, though the LPGA released several comments supporting the upgrade while sharing how much they will miss the tradition of Palm Springs in early spring to begin the major championship season.

All the LPGA majors except for the U.S. Women’s Open have title sponsors, and the USGA is close to announcing a presenting sponsor that would raise the Women’s Open purse. There was some concern that without a replacement for ANA, the major could not survive in the desert.

“I get tears in my eyes when I walk across the bridge to the 18th green at Mission Hills. That course is so special to me and I’m very sad to leave,” said So Yeon Ryu, who won in 2017. “But I also trust that Chevron will be a tremendous partner for the LPGA Tour and has a good plan for the future of this major championship.

“I plan to help them make sure that the history and traditions we have built at Mission Hills will move with the championship to its new location.”

McEnroe said Shore’s daughter, Melissa Montgomery, has been a “fantastic sounding board” over the years.

“We have every intention of staying in line with the history and tradition and the values of the founders,” he said.