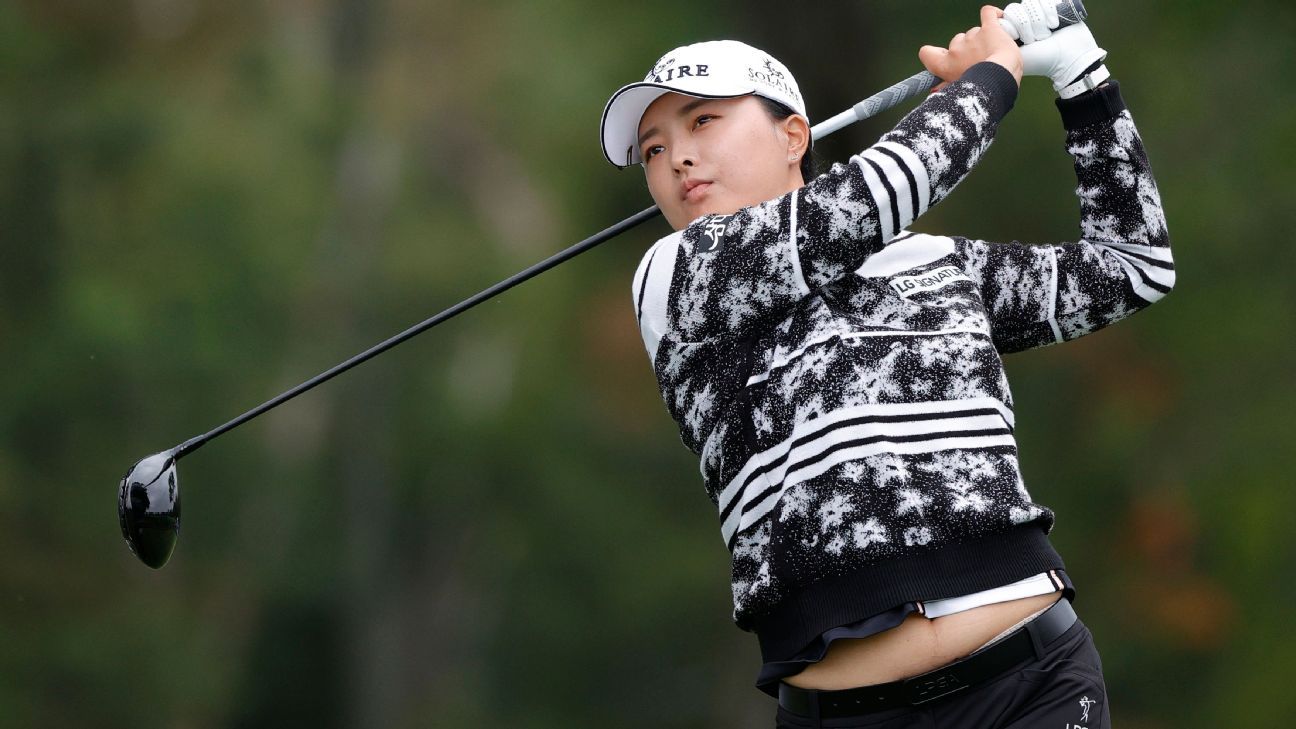 WEST CALDWELL, N.J. — Jin Young Ko put a tough loss behind her quickly and ran off six birdies over a seven-hole stretch on the back nine for an 8-under 63 on Thursday to build a three-shot lead in the Cognizant Founders Cup.

It was her 11th consecutive round in the 60s, three short of the record that Annika Sorenstam set in 2005.

Sandra Gal had a 66 despite not making birdie on any of the par 5s at Mountain Ridge.

The large group at 67 included Nelly Korda, the No. 1 player in women’s golf who had not played since the Solheim Cup a month ago, U.S. Women’s Open champion Yuka Saso and two-time major champion So Yeon Ryu.

Brooke Henderson of Canada got a putting lesson from Shirley Spork, one of the 13 LPGA founders, and it worked well enough for a 67. Spork said the “magic putter” now has a moniker, though Henderson chose to keep that their secret.

The first round was suspended by darkness because of a 90-minute delay Thursday morning due to fog. Thirty players didn’t finish the round. The best score of those was Moriya Jutanugarn at 3 under through 15 holes.

Ko, whom Korda replaced at No. 1 in the summer, had control of the ShopRite LPGA Classic last week in southern New Jersey until she missed a series of putts from the 10-foot range, including the last hole to finish one shot behind Celine Boutier.

She went shopping in Manhattan, took her share of naps and watched streaming shows. And then she was back to work, and it was working well.

“I was a little sad on the Sunday last week,” Ko said. “I had a lot of putts on back nine, so I was thinking, ‘Still my putter is really good, so like don’t be negative.’ So I will give myself positive thinking, and today I had a great round. The putting was not bad.”

Boutier and Inbee Park, who also finished one behind last week, each shot 70 in the afternoon.

Korda had not competed in stroke play since Aug. 22, the final round of the Women’s British Open at Carnoustie. The Olympic gold medalist took a month off to relax and contemplate what she has done this year — first major among three wins, an Olympic gold and her rise to No. 1 in the world. The 23-year-old American hopes this is only the start.

“I just go about my business the same as I would be ranked 20th, top 10, No. 1. I’m still trying to achieve goals,” Korda said. “There are girls still hunting for me. There is still a lot I would like to accomplish in my career. I’m hoping to put my foot on the pedal still.”

One of those hunting her is Ko, who held the No. 1 ranking for two years until Korda surpassed her by winning the KPMG Women’s PGA at Atlanta Athletic Club.

Ko is trying to worry more about the next shot instead of the No. 1 ranking. She has been on a roll since falling to No. 2. In six starts since the Women’s PGA, the 26-year-old South Korean has won twice, been runner-up and had two other finishes in the top 10.

At the moment, she is chasing players past and present.

“Nelly is [a] good player and I’m always happy to compete with her,” Ko said. “I want to play better than her a little bit, but she still hits it farther and great putter. I have to focus more on my game when I’m playing with Nelly.”

Sorenstam set the LPGA record for consecutive rounds in the 60s during her 10-win season in 2005. The streak ended with a 73 on the final day of the LPGA Championship, which she won by three shots at Bulle Rock.

Ko’s run began with a 69 in the final round of the Evian Championship. The next three tournaments were all 54 holes, one shortened by rain.

“If I can, it’s going to be a great honor,” Ko said of the Sorenstam record. “If not, still fine.”