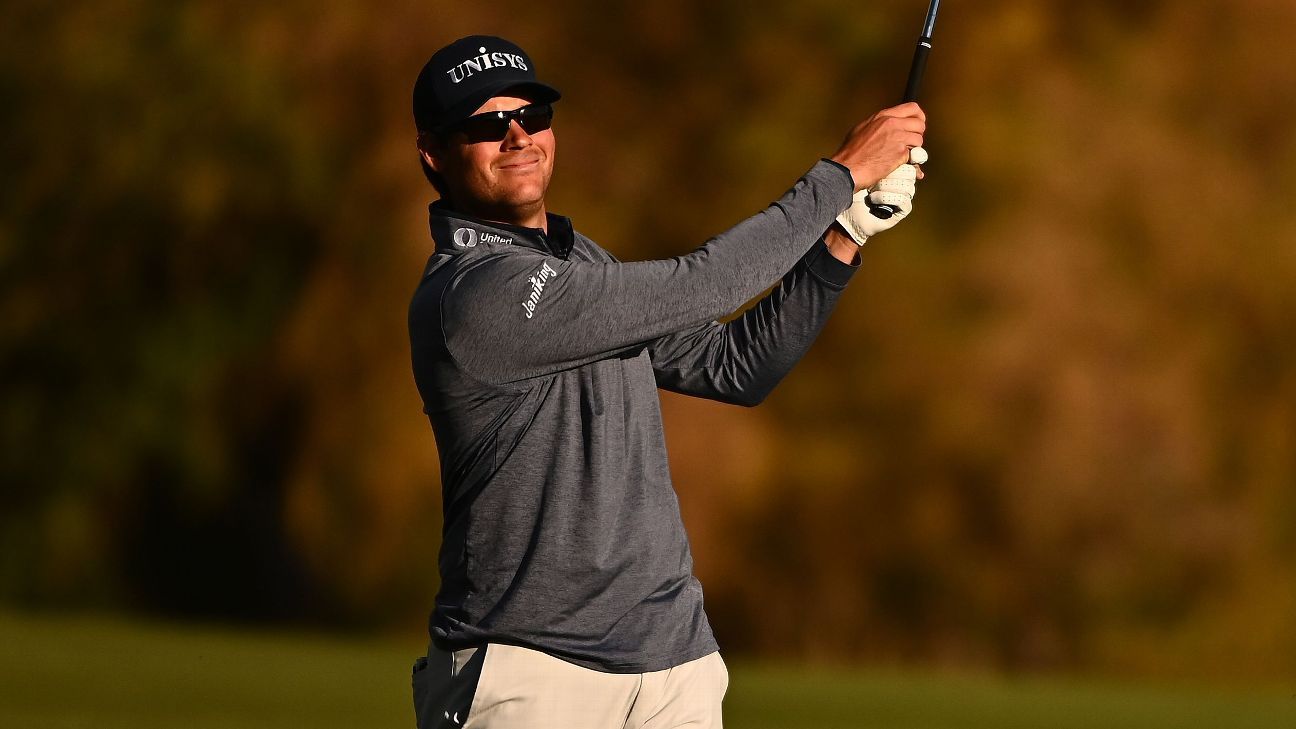 LAS VEGAS — Adam Schenk and Matthew Wolff both took a while to get started Saturday in the Shriners Children’s Open. It’s how they finished that put them into the final group with a chance to win.

Both figured that’s how it will unfold Sunday at the suddenly windy TPC Summerlin.

Schenk let the wind do the work for a driver onto the green at the par-4 15th, setting up three birdies over his last four holes for a 5-under 66 and a one-shot lead, the second time in his last five starts he has held the 54-hole lead.

The daunting presence behind him was Wolff, who drove the 15th green with a 3-wood and then blistered a drive so far down the par-5 16th hole that he had a pitching wedge for his second shot for eagle and carried him to a 65.

“The back nine, there’s two par 5s and a drivable par 4,” Wolff said. “I knew that making the turn at 1 under, I definitely would be in a good spot to make a run on the back nine.”

Sam Burns, another imposing figure coming off a victory last week in Mississippi, got it backward. He went out in 32 and was in the lead until he played the par 5s in 1 over and failed to convert on the short 15th. He had to settle for a 68 and was two shots behind, along with Andrew Putnam (66) and Chad Ramey (69).

“I feel like game’s in a good spot, so go out there tomorrow and see what happens,” Burns said. He answered the last three questions with four words: No, no and not really.

He was frustrated, knowing the scoring is all about the closing stretch at Summerlin, and that’s where Schenk and Wolff made their moves.

Schenk was helped even when the wind was against him. Knowing he couldn’t reach the bunkers right of the 18th fairway, he pounded driver, setting up a gap wedge to 7 feet for a final birdie and the lead.

Schenk, a 29-year-old from Indiana, was just getting started when he bumped into Lanto Griffin, who had just finished the low round of the day at 64. They didn’t talk golf, but just seeing the score made Schenk realized what was out there.

“I just knew I needed to come back and make some birdies, hopefully on the end of the front nine and then on the back nine during that stretch where it’s pretty gettable,” Schenk said.

Schenk was at 18-under 195, the second time he has held a 54-hole lead. The other was at the Barracuda Championship in August, when he had the equivalent of an even-par 71 on the final day of modified Stableford and finished fourth.

Six players were separated by three shots going into the final round at TPC Summerlin.

Schenk recorded his 10th consecutive round in the 60s at the TPC Summerlin, and this started out as one of the tougher days. Rain on Friday was shooed aside by wind that stuck around, and it was blustery enough early in the round to become a problem.

Schenk had two bogeys on his opening five holes and was in danger of falling behind, except that he knew the course – even a windy Summerlin – would offer chances. He seized them at the end of the front nine, running off three straight birdies, including a 6-iron to 5 feet on the 213-yard eighth hole.

Wolff loves it here, too. He has never shot worse than 69 in his 11 rounds in Las Vegas, dating to his rookie season. Wolff lost in a three-man playoff at the Shriners last year, and he had a hunch he was in for a good week.

He loves the course, yes, but he also could feel his game was getting more athletic, more powerful, and he was in a good position to score.

It just took him a little time on Saturday to prove it. He didn’t make birdie until the par-5 ninth hole, and then he made up for the slow start with the scoring holes on the back nine.

He hit 3-wood off the tee and 7-iron from 251 with the wind at his back on the par-5 13th, setting up a tough up-and-down from behind the green. He drove the 15th green with a 3-wood and crushed his drive on the 16th so far that he had a stock pitching wedge for his second.

The former Oklahoma State star looked confident as ever, a big change from earlier this year when he stepped away from golf to clear his head, to keep from letting scores dictate what makes him happy. He has family with him this week from California, and he has another shot to win in Las Vegas.

Here’s the prize money payout for each golfers at the 2023 Farmers Insurance Open
Golf Lesson Part 1
Huge Rickie Fowler drive JUST misses fans! 👀
Sounds like Cam Smith got down to business (literally) during the offseason getting his LIV team set for Year 2
How to watch PGA Tour’s AT&T Pebble Beach Pro-Am on ESPN+