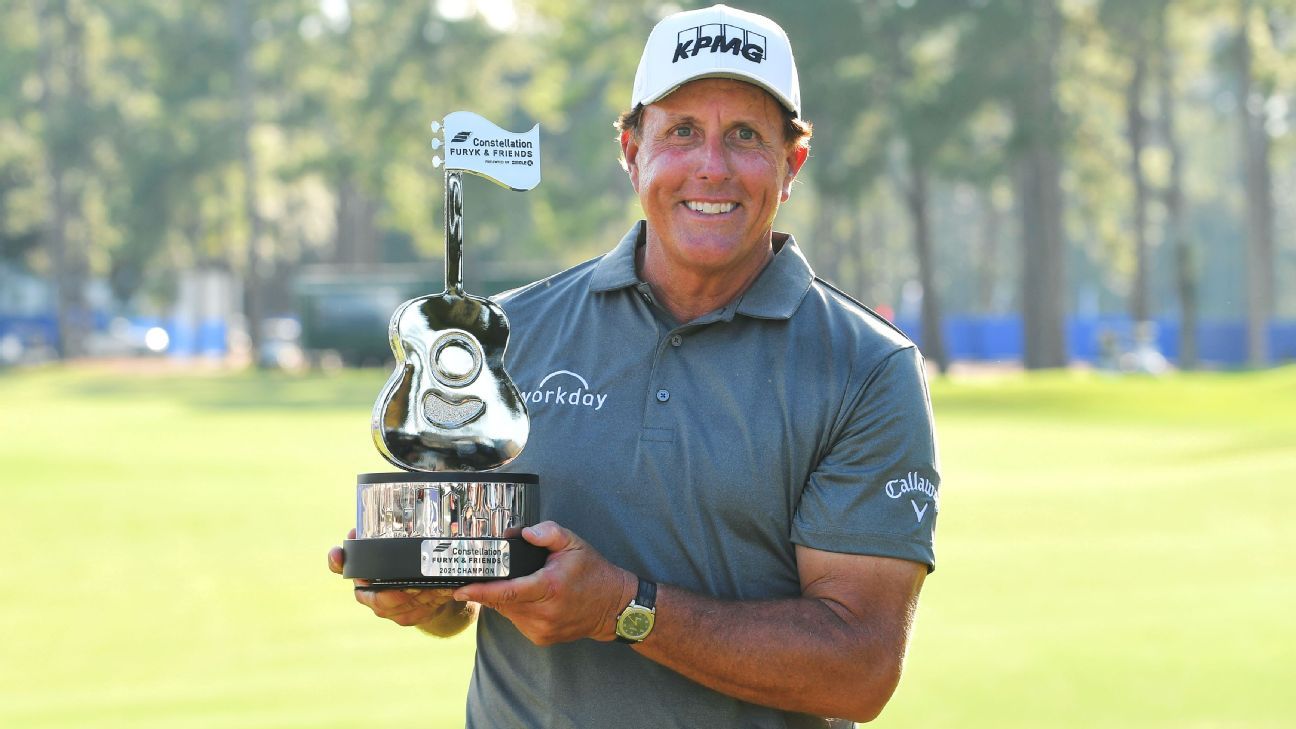 JACKSONVILLE, Fla. — Phil Mickelson won for the third time in four career starts on the PGA Tour Champions, closing with a 4-under 68 on Sunday for a 2-shot victory in the Constellation Furyk & Friends.

The 51-year-old Mickelson won for the first time since his out-of-nowhere triumph at the PGA Championship at Kiawah Island in May for his sixth career major title. He has struggled on the PGA Tour since then, and this was his first Champions event since February.

Miguel Angel Jimenez battled with Mickelson throughout the day at breezy Timuquana Country Club and pulled even with birdies on the par-5 13th — where Mickelson three-putted for par — and the par-3 14th. But Mickelson converted a two-putt birdie on the par-5 15th to move ahead for good.

“He played some really good golf. He made a great up-and-down on 13 and the shot on 14 was really impressive. That par 3, that’s a hard pin — it rolls left of the pin, right of the pin. He just stuck it in there tight and wouldn’t go away,” Mickelson said about Jimenez. “I was appreciative that I was able to birdie two coming in and come out on top, but it was a tough day.”

Jimenez also shot a 68, nearly holing a long birdie putt on the par-4 18th that would have forced Mickelson to make his 10-foot birdie for the win. Mickelson holed it anyway for the 2-shot margin.

“On the back nine, we’ve been there close, close, close, tie, and he [makes] a birdie on the 15th, but I was close. Then chance for birdie on 17, that’s the game, you know? He’s playing very well,” Jimenez said.

Mickelson finished the first-year event at 15-under 201. Last year, he opened his senior career with consecutive victories in Missouri and Virginia.

Mickelson birdied the first three holes but blocked his tee shot left on the par-4 fifth, leading to a double bogey.

“You do that on the regular tour, you just get eaten alive, you just can’t make those mistakes there and have a chance to compete and contend and win,” he said. “So I like how you don’t have to be perfect and I can get away with a shot or two here or there.”

Mickelson said he plans to play at least two more tournaments on the 50-and-over tour this fall — in Richmond, Virginia, where he’s the defending champion, and at the Charles Schwab Cup Championship in Phoenix.

Steve Flesch (71) was third at 10 under. Tournament host Jim Furyk (69) was part of a three-way tie for fourth at 9 under with Cameron Beckman (68) and Ernie Els (71). Bernhard Langer closed with a 67 to tie for seventh at 8 under, allowing the 64-year-old to maintain his position atop the Charles Schwab Cup standings with four events remaining in the season.

McIlroy leads by 3 ahead of final day in Dubai
Patrick Reed involved in another rules question after ball gets stuck in tree
Stop slicing your driver with this super simple golf grip tip.
Me vs a 23 handicapper… with a twist!
McIlroy tops Reed to Dubai title in tense finish