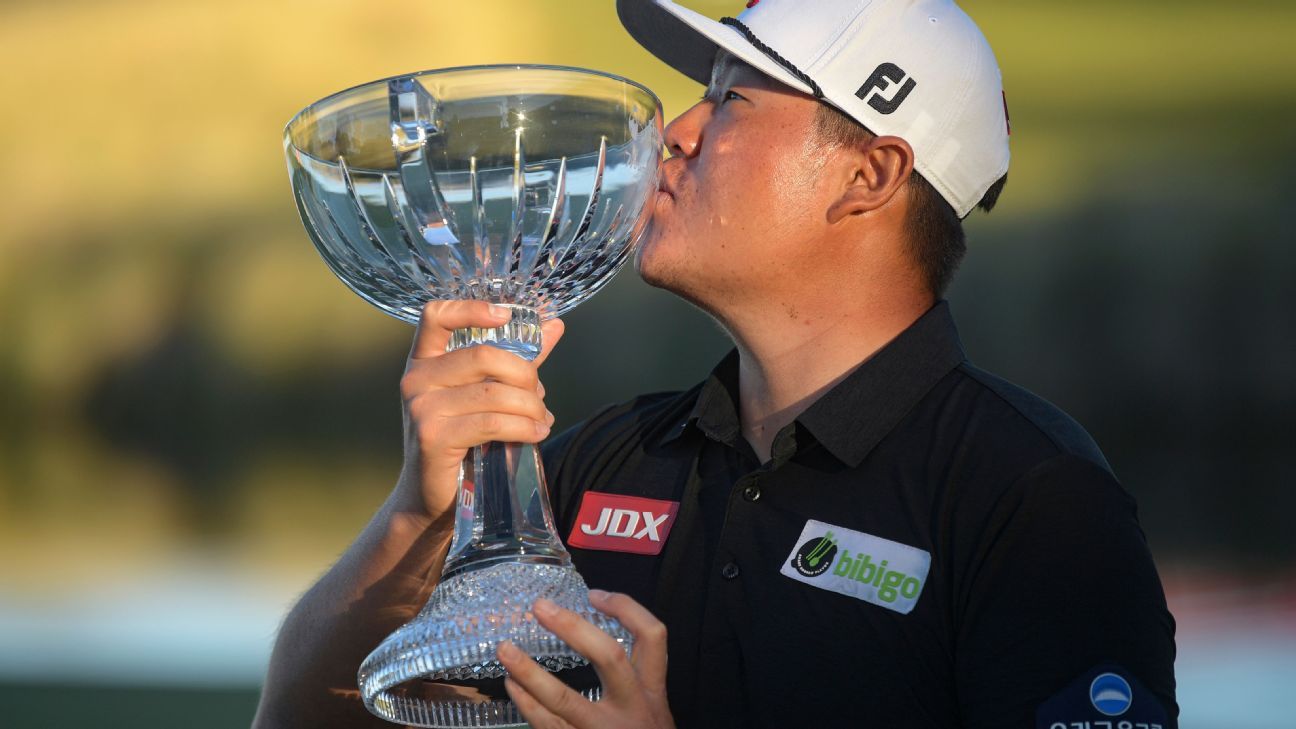 LAS VEGAS — Sungjae Im turned a shootout into a one-man show Sunday in Las Vegas, running the tables with seven birdies in eight holes around the turn for a 9-under 62 and a 4-shot victory in the Shriners Children’s Open.

Im was among four players who had at least a share of the lead on the front nine of the TPC Summerlin on an ideal day of scoring with little wind.

When he holed a 12-foot birdie putt on the sixth hole, the third toughest on the course, to tie for the lead, the 23-year-old South Korean was just getting started.

He closed out the front nine with a simple up-and-down short of the green on the par-5 ninth to take the lead, then ran off four more birdies, the best of that lot on No. 10 when he went from a fairway bunker to 25 feet and made the putt.

No one else could keep up. His strongest challenger, Matthew Wolff, rolled in an 18-foot birdie on the ninth to keep pace. He had two misses off the tee that cost him.

Wolff had to pitch out to the fairway from high grass right of the 10th, leading to his first bogey. And he was deep in the bunker on the par-5 13th and barely got it out into a nasty lie, advanced that only about 90 yards, and took a bogey that felt much worse.

Wolff recovered with two birdies for a 68 — his 12th round in the 60s in as many tries at the TPC Summerlin — and was runner-up.

Rory Sabbatini, the Olympic silver medalist from Slovakia, shot 28 on the front nine and was briefly tied for the lead. He could manage only even par on the back nine for a 64 and tied for third with Marc Leishman (63) and 54-hole leader Adam Schenk (70).

Im had the best closing round by a winner in Las Vegas since Smylie Kaufman shot 61 in 2016. He won for the second time on the PGA Tour following his Honda Classic title in 2020, two weeks before the pandemic shut down golf.

“It was very tough to get my first win but I felt like the second one was harder and harder,” Im said. “But I kept my patience. I tried to stay composed and I’m glad it came.”

He got the right conditions for it. The blustery conditions from the third round, when Im shot 70 to fall 3 shots out of the lead, calmed down on a course with plenty of scoring opportunities. Im opened his round with a 30-foot putt, a sign of what was to come.

The key was his iron play, as usual. Im missed only one green in the final round and never came seriously close to dropping a shot.

“The big difference between yesterday and today was that today there was no wind compared to Round 3, and that made it easier,” he said. “But again, tee-to-green, driver, irons, putting game, it worked as I wanted it to and it gave me a good result.”

For Wolff, there wasn’t much he could do but smile.

“This game is like, when I’m in the lead or contention, someone just seems to go off the last day on me,” he said.

One example would be Bryson DeChambeau shooting 67 in the final round at Winged Foot while playing in the final group with Wolff in the U.S. Open last year.

“But if I keep on putting myself in these positions I know that eventually it’s going to be in my favor and I’m going to win,” he said.

Sunday wasn’t that day, especially on the par-5 13th. He figured his 3-wood could easily clear the bunker on the left. And when it didn’t, he assumed it would roll back to the bottom of the sand and he still would have a reasonable chance at birdie.

Instead, he said someone left the rake at the top and the ball came to rest on a slope in an indentation left by the handle. All he could do was get it out some 15 feet. Even with a good lie, catching Im was going to be tough.

“He was taking it really deep,” Wolff said.

Sam Burns, coming off a win last week in Mississippi and only 2 shots back starting the final round, made an early birdie and then stalled until it was too late. He finished with a double bogey for a 72 and tied for 14th.