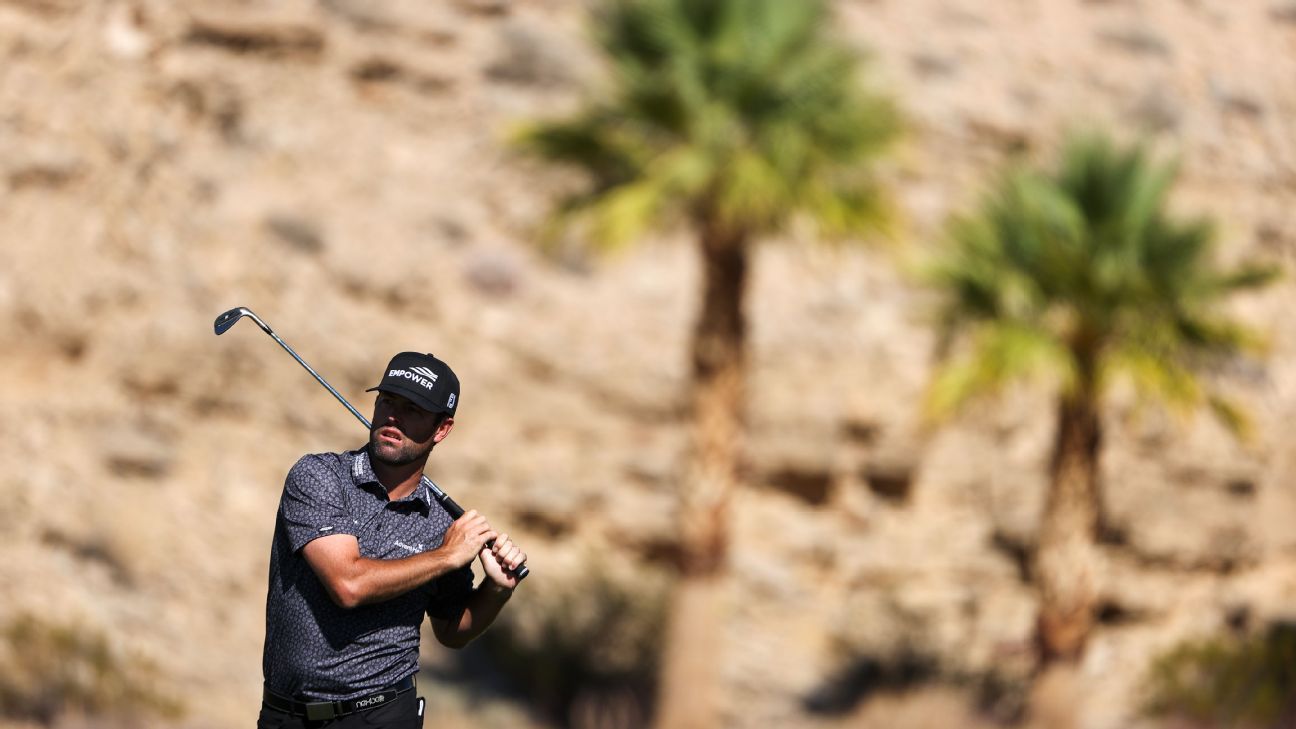 LAS VEGAS — Robert Streb went from making putts to wondering if he would ever miss Thursday in the CJ Cup at Summit. It led to his best start to any tournament and his lowest score on the PGA Tour.

And on this day at The Summit Club, his 11-under 61 was only good for a one-shot lead.

A world-class field lit up a very pretty and mostly defenseless golf course overlooking the Las Vegas Strip. The result was the lowest average score — 68.95 — for the opening round on the PGA Tour all year.

Streb had 10 birdies and an eagle and led by one shot over Keith Mitchell, who had more birdies than pars in matching his low round with a 62. Harry Higgs was at 64, while the group at 65 included Sergio Garcia and Viktor Hovland.

Such scoring in ideal conditions was what players were expecting on this Tom Fazio desert course, and Streb wasted little time proving it.

He started with a pair of 6-foot birdie putts and followed with a 12-footer for eagle. When he walked off the par-5 sixth hole after a long two-putt for birdie, he already was 7-under par.

“I’ve never had a start like that, so it was kind of fun,” Streb said. “I was trying to stay in the moment the best I can, and I don’t know. You just feel like you can start aiming at stuff. Things seemed to be going my way.”

Streb broke by two shots his previous low score on the PGA Tour, one of those 63s in the PGA Championship at rain-soaked Baltusrol in 2016.

But while low scores were plentiful — 25 players at 67 or lower — so was trouble if anything left the emerald green fairways.

Consider how it must have felt for Justin Rose. Two holes into the tournament, he already was 10 shots behind.

Rose came up short of the par-3 second green into a native area of mostly rocks and some sand. He tried to play it and the ball ricocheted off a stone wall into a desert bush. His only option was to take a penalty drop — but where? Going back on a line with the hole, he found a fairly sparse area only to duff it toward the wall and more rocks. After another penalty drop, he got up-and-down for a quadruple-bogey 7.

It’s not as though Rose was alone in his travails. Dustin Johnson, trying to avoid only his second winless year in his 14 years on the PGA Tour, tried to drive the 12th green and wound up in the desert. He took a drop 50 yards behind him in a lot for the next mansion and made double bogey. He made his only birdie on the back nine at the par-5 closing hole for a 74.

Justin Thomas was off to a slow start and then went into reverse when he tried to play out of the desert and kept banging it off the rocks. One shot went 25 feet. Another went 30 yards into a lie so bad he had to take a penalty. Plus, his wedge had a gouge in the face, and a rules official had to fetch a replacement from his car.

Thomas birdied his last three holes for a 69.

Rory McIlroy was making his move until going into the desert, clanging it off rocks that led to a penalty drop and making triple bogey. He had to settle for a 68.

“It’s one of those courses where if you just keep it in play, it’s obviously very scorable,” McIlroy said. “But you hit a couple just offline and you get a bad break or a little unlucky, you can make a big number and I did that on 17. But the other 17 holes were good.”

All 18 holes were good for Mitchell, at least at The Summit Club. He missed the cut last week down the road at the TPC Summerlin and then spent five days working harder than most visitors to Las Vegas, and it helped that putting coach Ramon Bescansa was in town.

Mitchell made a 15-foot birdie putt on the par-5 third and was on his way. He followed with two more birdies from about that range and never let up.

“When that went in with good speed, I felt like I had a chance today,” he said.

Good putting goes a long way on any course. Keeping it on the grass on a course built in the desert also helps.

“If you hit the fairways, you have good chances. It’s that simple,” Mitchell said. “Because if you miss the fairways, the desert is a big penalty. It just depends on luck after that. … If you get out of position out here it can bite you.”

Defending champion Jason Kokrak probably wished he was back at Shadow Creek. He opened with a 77.

This is the second straight year the CJ Cup has moved from South Korea to Las Vegas because of the pandemic.

My BEST Golf ball for holing more putts!
How To Break 90 In Golf – The Truths
Improve Your Tee Shots With Shoulder Alignment
Patrick Reed’s latest rules saga just took its unlikeliest turn yet
Phil Mickelson says he’s ‘at peace’ with never playing in another Ryder Cup or PGA Tour event