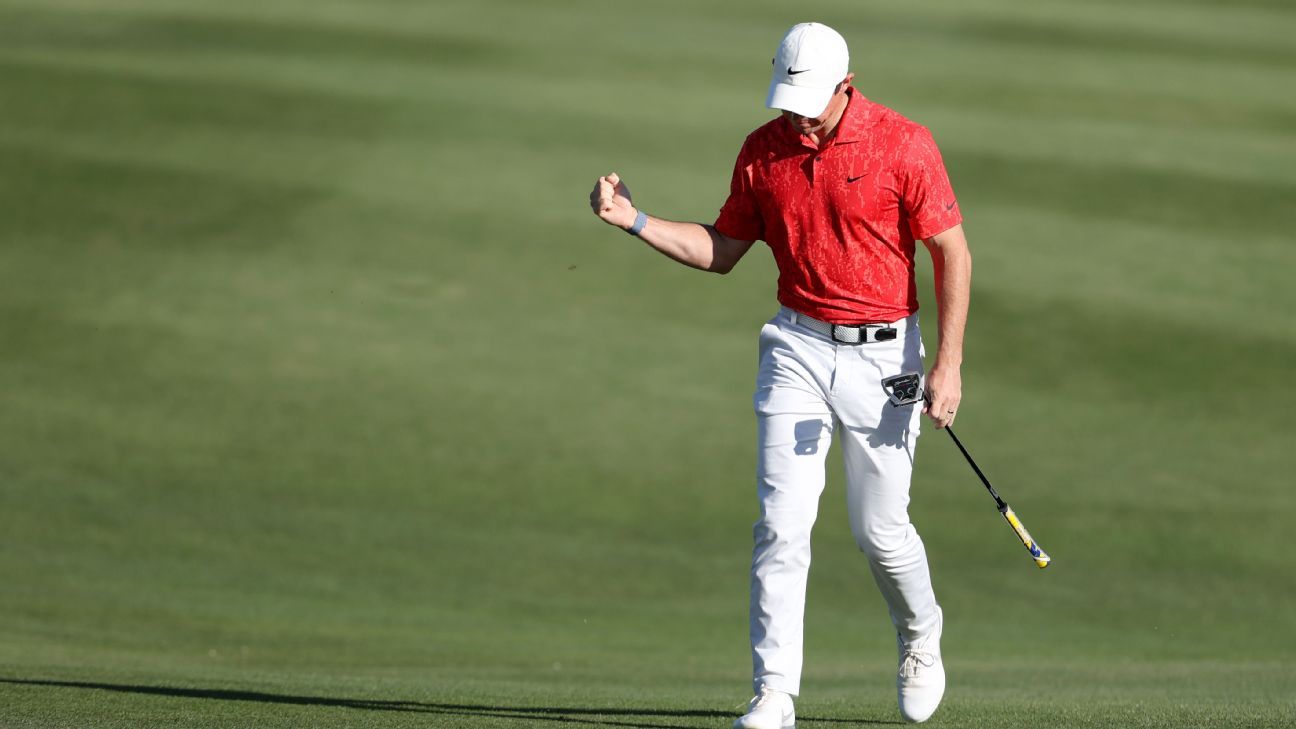 LAS VEGAS — Rory McIlroy capped a big weekend in Las Vegas on Sunday by surging past Rickie Fowler and holding off Collin Morikawa to win the CJ Cup at Summit for his 20th PGA Tour title.

McIlroy seized control with a 35-foot eagle putt from just off the green on the par-5 14th and then playing mistake-free down the stretch for a 6-under 66.

McIlroy is the 39th player to win at least 20 times on the PGA Tour, and it’s his fifth straight PGA Tour season with at least one win.

Fowler, who started the final round with a two-shot lead as he tried to end nearly three years without a victory, faded with a pair of three-putts and shot 71 to tie for third. The threat came from Morikawa, a member at The Summit Club, who shot 29 on the front to get in the mix and closed with an eagle for a 62.

That forced McIlroy to play mistake-free after his big eagle putt on the 14th, and he never came close to a bogey in finishing at 25-under 263.

He went into the weekend nine shots out of the lead, made up plenty of ground with a 62 on Saturday and then pulled away by taking advantage of the scoring holes.

It was similar to his first win on the PGA Tour in 2010 at Quail Hollow. McIlroy was nine shots behind going into the weekend at that tournament and closed with rounds of 66-62 to win.

Morikawa was watching from the balcony overlooking the 18th green to see if he would get a chance for extra holes, though it was asking a lot for McIlroy to drop a shot on the par-5 closing hole. McIlroy laid back off the tee, played short of the green and hit wedge to the back pin to assure a two-putt par and another trophy.

Part of him was sparked by a disappointing Ryder Cup, when he didn’t win a point until Sunday singles when it was too late and was choked up with emotion talking about it.

He wanted to get back to his roots as a player, and it worked out just fine against a strong field that allowed McIlroy to move from No. 15 in the world to back among the top 10.

“Being me is enough,” he said. “Being me can let me do things like this.”

Keith Mitchell, who had a five-shot lead going into the weekend until a 73 in the third round, closed with a 67 and tied for third with Fowler.

Fowler was poised to end a 32-month drought by starting the final round with a two-shot lead and looking as though he was intent on finishing it off. He made an 8-foot birdie putt on No. 4 that became a two-shot swing when McIlroy had a careless three-putt bogey.

That began to change on the par-5 sixth. From the middle of the fairway, Fowler pulled a fairway metal into the desert, took a penalty drop, and then three-putted from 35 feet for a double bogey. McIlroy made birdie and just like that they were tied, along with others farther along in the round.

McIlroy and Fowler in the final group were tied at 22 under going to the back when Fowler made another mistake.

McIlroy was looking at potential bogey, coming out of a fairway bunker well short of the green on the 10th and facing a tough flop shot over another bunker to a tight pin. Fowler had 18 feet for birdie. McIlroy hit to inches away for par, while Fowler gunned his birdie chance some 5 feet by the hole and missed that for a three-putt bogey.

Morikawa ran out of momentum. Sure, he closed with a birdie that forced McIlroy to play mistake-free over the final four holes, but the British Open champion failed to take advantage of birdie chances on the reachable par-4 12th and the par-5 14th with an iron from the fairway.

“Whenever you shoot 62 you’re always going to be pleased,” Morikawa said. “But I thought I left a few out there, especially with some putts. But overall I’m very pleased the way this last 18 went, especially at a course that I’ve played a lot. I felt very comfortable and it’s a good way to start the season.”

3 Tips To Instantly Improve Your Putting | Bryson DeChambeau
Rahm struggles with 73, well back at Farmers
This club pro has a spot in the PGA Tour’s next $20 million ‘designated’ event. Can Michael Hopper cash in?
NEW CALLAWAY GBB EPIC DRIVER REVIEW
Was this ruining your Golf swing?🤦🏻‍♂️#golfswing #golfcoach #golftips #golfinstruction #golflesson