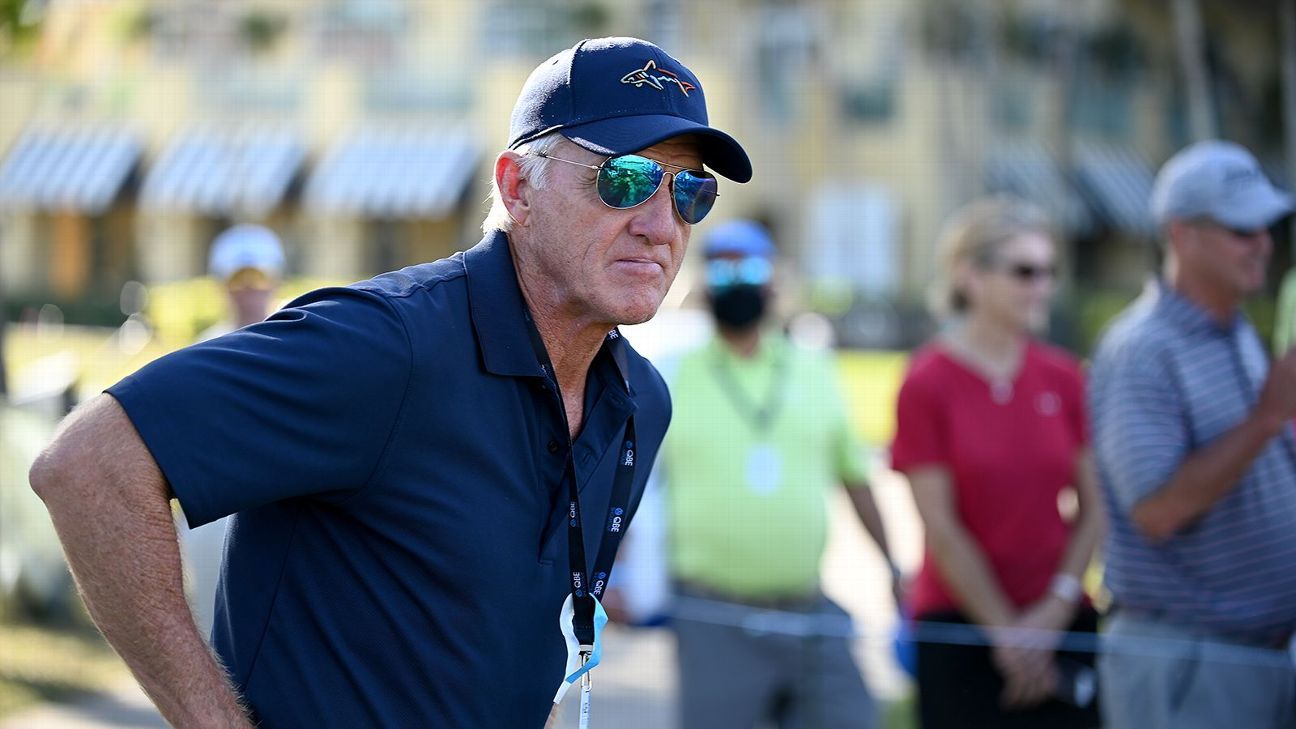 Along with an ability to drive a golf ball better than anyone with a persimmon club, Greg Norman had a keen awareness of his own worth as a golfer, especially as it applied to securing fees for his participation.

Norman makes no secret of this. The Australian golfer who earned the nickname the “Great White Shark” and suffered heartbreak along with an abundance of success throughout a Hall of Fame career knew that the best golf in the world was being played on the PGA Tour in the United States.

But he also saw opportunity beyond the tour’s borders, and always wanted to explore them. Starting in 1984, when he played his first full season on the PGA Tour and won his first tournament at the Kemper Open, he always wondered why his ability to play around the world came with stipulations.

As a member of the PGA Tour, he had rules to adhere to and permissions to obtain. And to this day … it bugs him.

“It still frustrated me to death why, as an independent contractor, I couldn’t get out there and expand on my true market value that I truly believe I had,” Norman said. “Same with all the other players.”

And here we are.

Nearly 30 years after Norman first attempted to start a rival tour that would bring the best players together at venues around the world for guaranteed money and lucrative purses, he is now the commissioner of an upstart league that has yet to be publicly named but is busy behind the scenes working to secure people in leadership roles and several players — who, if signed — would give the venture credibility.

Having been anointed the CEO of this new venture called LIV Golf Investments, Norman unveiled a limited amount of plans last week.

How this plays out over the following weeks and months will be fascinating to follow, but Norman’s role is instructive. He — along with the late Seve Ballesteros — battled the PGA Tour’s hierarchy in the early 1980s. Norman sought — with the help of Fox Sports — to launch a World Tour in 1994 that was eventually thwarted by then-PGA Tour commissioner Tim Finchem.

Now he’s back for another try, but with many of the same questions still to be answered.

“I always wanted to understand why we were stuck in a box,” said Norman, 66, the winner of 20 PGA Tour events and 88 worldwide who was ranked No. 1 in the world for 331 weeks. “In [1993-94], I thought of this idea of how do we get the best players to play against each other on more of a regular basis and give them an annuity into the future.

“I always thought if I could do something for my fellow players and carry the burden of responsibility … I just thought there was a better way, why I thought of this World Golf Tour, where they could have ownership. That’s thinking out of the box. That’s thinking like an independent contractor. Like an entrepreneur. Understanding the marketplace.”

This is not a purely altruistic endeavor for Norman. He is not designating his business interests in the Greg Norman Company to be handled by someone else simply for the good of his fellow players.

Norman will be paid handsomely for his time, popularity and expertise. And with the backing of the Public Investment Fund — the sovereign wealth fund of the Saudi Arabian government — there is a seemingly endless supply of money to take care of him and all the needs of the new league, along with the scrutiny he will face at every turn for being associated with the Saudi government.

The term “independent contractor” is likely to be one that gets a lot of attention as this situation moves forward. PGA Tour players are independent contractors, but with enormous benefits: a pension plan, health care benefits, weekly perks for being members of the tour.

The FedEx Cup bonus money is paid out to 150 places. Purses continue to go up. Jon Rahm led the money list last season with more than $7 million in official earnings. Patrick Cantlay was second and earned another $15 million for capturing the FedEx Cup. There were 67 players who earned more than $2 million in official earnings. Another 57 players earned $1 million or more.

Life on the PGA Tour is pretty good. But the key word is “earned.” Other sports give guaranteed deals, something not available for PGA Tour players. The opportunity to do that exists when traveling to events that will pay appearance fees. That is the crux of Norman’s issue. Why are players not allowed to freely play where they want?

As an Australian, Norman wanted to support his home circuit, his home events. He won the Australian Open five times, the Australian Masters six times. He also won another 22 Australasian Tour events.

But while a member of the PGA Tour, he had to seek and be granted releases to go play them.

The tour long ago shrewdly set up a system that requires players to sign over their media rights when they become members. That means they can’t just play wherever they want. It’s why when Tiger Woods and Phil Mickelson played their Las Vegas “winner take all” $9 million match in 2018, the tour got a piece of the action.

It is simply protecting itself. The tour wants to tell sponsors its players will be available. Hence it requires them to play a minimum of 15 events, and seek releases to participate in tournaments staged on other tours, even exhibitions. It’s one of the reasons the PGA Tour enjoys a lucrative television contract and can offer purses that make even average players very wealthy.

The number of releases granted is typically three per season. To get more than that requires negotiation, and the tour likely will receive some sort of guarantee from the player: an extra start somewhere; a visit to a place he has not played previously.

All of that seems reasonable. Even though they are independent contractors, they are joining a player-based association that has rules. You can abide by them or not; Norman always did but felt frustrated that he was constricted, because securing five, six or seven releases became prohibitive.

The crux here is that a player who wants to compete on the PGA Tour as well as this new league Norman is championing will undoubtedly need more than three releases to make it work. How is it in the best interests of the PGA Tour to grant them?

“We are not here to pick a fight,” Norman said.

And yet, it seems like that is exactly what is coming.