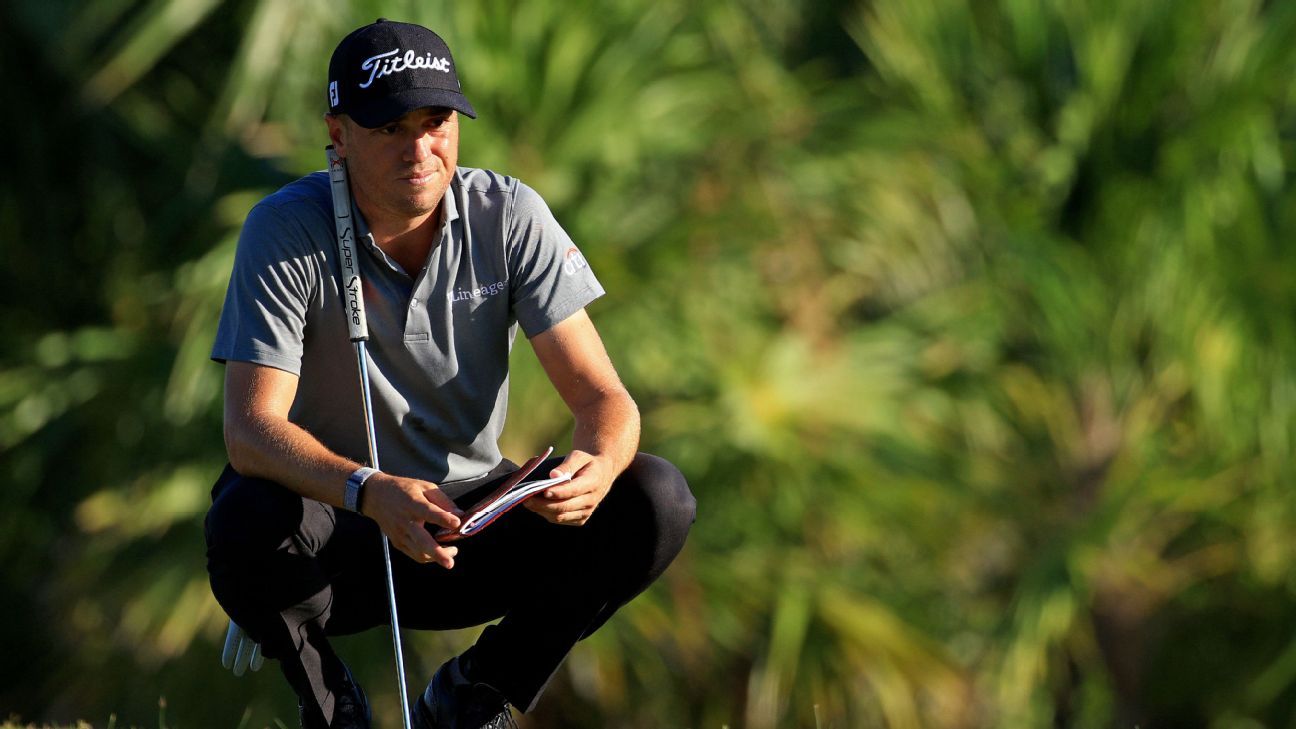 Justin Thomas pointed to the positives after his third-place finish at World Wide Technologies Championship, a tournament where he was in contention through three rounds but could not close the gap on Sunday and finished 5 shots behind winner Viktor Hovland.

That has — save for the Players Championship — been the story of Thomas’ 2021 year, one that he determined was disappointing earlier in the week despite the big win at the PGA Tour’s flagship event and finishing fourth in the FedEx Cup standings.

“I would say it has not been a very good year at all,” Thomas said. “Definitely haven’t closed out as many tournaments. As good of finishes I’ve had, I feel like I should have won more than once and played a lot better in the majors.”

Thomas clearly has high expectations for himself, and it’s easy to see why the previous season did not satisfy him.

Although he won the Players Championship by shooting an impressive final-round 64 that included hitting 17 of 18 greens, Thomas typically walked away frustrated at his inability to win more.

He played 21 times in 2021 as part of the just-completed season and had just five top-10 finishes. He did not contend in any of the major championships, his best a tie for 19th at the U.S. Open. He had a missed cut at the PGA Championship. He also fell from third in the world to sixth after getting to No. 2 following that win at The Players.

“I’m one or two tournaments away from being in the top two or three again,” Thomas said. “It’s all about runs out here. [No. 1-ranked Jon Rahm has] been on an unbelievable run, DJ (Dustin Johnson) got on an unbelievable run, Brooks [Koepka] was on one, Collin’s (Morikawa) been on one. Everybody gets on these runs of the top players.

“And I know that I’m due and ready for another one — it’s just a matter of when it will happen. I just need to stay in the right mind frame for it because this game doesn’t necessarily owe you anything. I’ve just got to keep working and putting myself there, and once I get on a little bit of a run, the world ranking stuff will take care of itself.”

After the Ryder Cup, Thomas and his only full-time caddie since turning pro, Jimmy Johnson, decided to part ways. Thomas then brought on veteran Jim “Bones” Mackay, who had gone to work for NBC Sports after his long run with Phil Mickelson ended in 2017.

In two starts of the new season, including a tie for 18th at the CJ Cup, it is clear that Thomas is leaning on Mackay for more help on the greens and is looking for improved putting to be an impetus to more success.

Mackay previously caddied for Thomas in a fill-in role, including a victory at the 2020 FedEx St. Jude Championship as well as a run through the FedEx Cup playoffs.

“This is a new season, completely different,” Thomas said. “Especially with Bones, it kind of feels like a fresh start, a new start. I was getting off to a good start for the FedEx Cup especially and it might take a little pressure off us.”

Thomas did quite well to turn things around at Mayakoba. He was 3 over par through the first nine holes of the tournament at an event where multiple shots under par was required. He turned things around over his final nine holes, shooting 30 to get in red numbers. From there he forged into contention before settling for third.

Thomas will compete again at the Hero World Challenge in the Bahamas next month, an unofficial event, before resuming his season in January at the Sentry Tournament of Champions.

Next step for Norman — adding players

Greg Norman giving up day-to-day control of his golf company and being named CEO of LIV Golf Investments was the first step in a plan to launch a golf league that will offer lucrative opportunities for players while possibly causing some friction with the PGA Tour.

Norman announced that he will be the commissioner of the yet-to-be-named league but first teased with the news that the new venture would be investing $200 million in the Asian Tour.

Last week, LIV Golf said that two high-profile names in the business had joined the effort. Ron Cross used to work at Augusta National and for the PGA Tour and for a time was commissioner Jay Monahan’s top adviser. Sean Bratches is a former ESPN marketing executive who most recently worked for Formula One. Both give the investment group plenty of credibility.

But the biggest will come from the naming — or signing — of players. That has yet to come and will be a crucial step in the process.

There have been plenty of players whose names have been rumored, but so far nothing is official. And that will be the crucial answer to where this is headed.

One thing to keep in mind, however: With the backing of the Public Investment Fund out of Saudi Arabia, Norman does not need to be in a hurry. It is unlikely that his group would fill out of a roster for limited-field events with nothing but the top players. It would seem that might take some time.

This concept — or the Premier Golf League, the other potential league — was never going to get every one of the top players. But it needs at least a handful. And from there, it is possible others might see the benefits — or negatives — to signing on.

When the PGA Tour returned to play in June 2020 after a three-month hiatus because of the coronavirus pandemic, it received exemptions for travel for international players to come to the United States.

That will no longer be the case, as a new policy went into effect on Monday that opens the borders to international travelers but requires those players and caddies from other countries to adhere to the same rules.

And that means a player, caddie or agent who is not vaccinated for COVID-19 will not be allowed entry.

“The Policy allows for VERY limited exemptions,” the Tour said in a memo to players. “Please note that the PGA Tour is not considered exempt from this policy.”

International players will be required to produce proof of vaccination as well as a negative COVID-19 test within three days of travel to the United States.

The PGA Tour’s fall schedule is winding down with this week’s Hewlett Packard Enterprise Houston Open and next week’s RSM Classic. The unofficial Hero World Challenge takes place the week after Thanksgiving in the Bahamas, with the QBE Shootout, another unofficial event, the following week.

The PGA Tour said 83% of all constituents, which include players, caddies and essential personal, are vaccinated for COVID-19.

Keita Nakajima might be unknown to the world at large, but the No. 1-ranked amateur in the world won the Asia-Pacific Amateur on Saturday in Dubai, United Arab Emirates, earning a spot in the Masters to go with those he already cemented for the U.S. Open and The Open. Nakajima is just 21 but has already won a Japan Tour event and finished second in another. He was a heavy favorite in Dubai and delivered at the tournament started in 2009 by Augusta National as a way to expose the game and offer opportunities to those in the Asia-Pacific region.

Nakajima will undoubtedly join countryman and defending Masters champion Hideki Matsuyama for a practice round at Augusta National. Matsuyama jump-started his career by winning the Asia-Pacific Amateur twice.