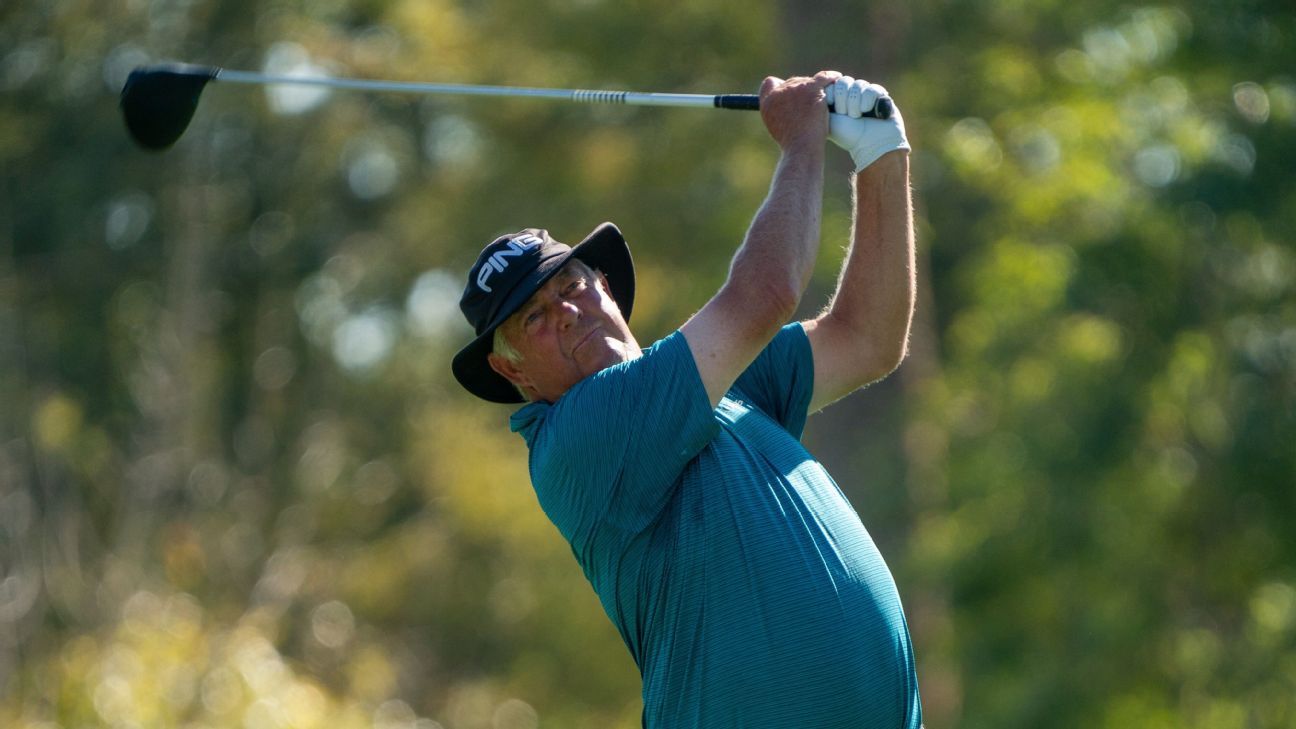 PHOENIX — Kirk Triplett shot a 7-under 64 to move into the lead Friday and Jim Furyk remained in contention for the season title with a 67 in the second round of the Charles Schwab Cup Championship.

Playing in the final group with Phil Mickelson, Triplett shut out the noise from the largest, most boisterous gallery at Phoenix Country Club, finishing with seven birdies and no bogeys. He was at 13 under, two ahead of recent qualifier Steven Alker, who shot a 65.

Furyk, who can win the season-long Schwab Cup points race with a victory this weekend, is tied with Mickelson at 10 under after reeling off six birdies. Mickelson finished off a 67 with a two-putt birdie on the par-5 18th hole.

Schwab Cup leader Bernhard Langer struggled with a balky back for the second straight day, hitting into three penalty areas for a 72. He was 11 shots back at 2 under, but still can win his sixth series title.

Miguel Angel Jimenez and Ernie Els were well back in their bids to win the Schwab Cup Championship and the series title. Jimenez is at 6 under after a 66 and Els shot 73 to finish at 1 under.

Langer battled through intense back pain and needed caddie Terry Holt to retrieve his ball from the hole during an opening-round 68, three off the lead. The 64-year-old German was moving a little better in the second round, though still a little stiff anytime he bent down.

Langer was feeling good enough that he and Els cracked a smile when Holt said “No, I’ll get it” after Langer tapped in for par on No. 9. There were no smiles when Langer took consecutive double bogeys after hitting out of bounds on the par-4 14th and into the water on the par-3 15th.

Langer still has a good chance at winning the Schwab Cup for the fifth time in seven years if he can get his back healthy and play well on the weekend.

Alker has been on quite a run.

The New Zealander had no status when he turned 50 in July before qualifying for the Boeing Classic in August. He had top-10 finishes every week to keep playing and become eligible for the postseason, which included a win last weekend at the TimberTech Championship in Florida.

THE most FRUSTRATING yet REWARDING game – Worst Ball Vlog
STOP DUFFING your Golf Shots in 15 SECONDS
IRON SWING BASICS – 3 TIPS TO STRIKE YOUR IRONS
“A Beautiful, Pure Shot” – Paul Lawrie 1999 | My Greatest Shot
We’re not quite sure how Scott Hend pulled off this spectacular sand shot