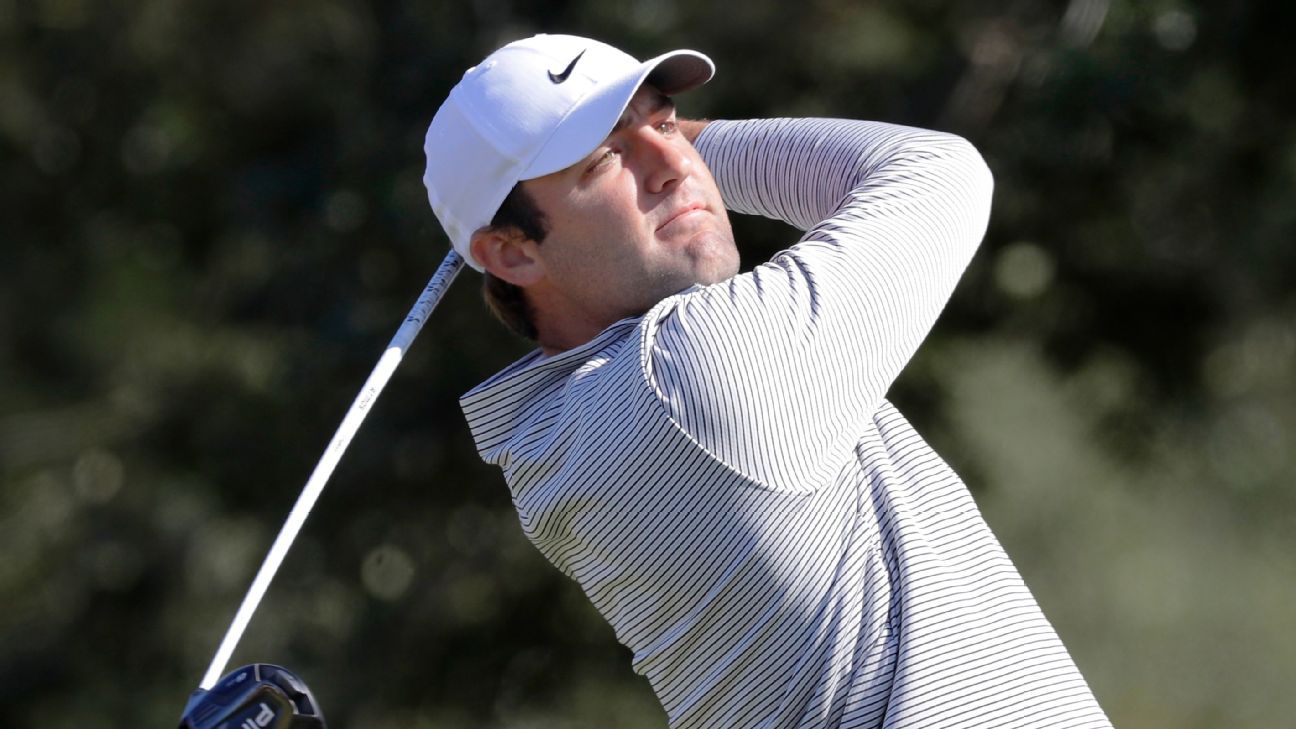 HOUSTON — A key figure in the U.S. victory at the Ryder Cup, now Scottie Scheffler goes after a trophy of his own in the Houston Open.

Scheffler pitched in from 55 feet for birdie on the 14th hole, holed a 10-foot birdie on the next hole and avoided mistakes down the closing stretch Saturday at Memorial Park for a 1-under 69 and a one-shot lead going into the final round.

Scheffler, in his third year on the PGA Tour, has a 54-hole lead for the first time. He was tied for the lead going into the final round at The American Express in 2020 and finished third.

“I’m just going to go out there and try to get off to a good start and hopefully put myself out in front early and stay there,” Scheffler said.

Kevin Tway had the lead until he chipped in the water and had to scramble for bogey on the par-4 17th, and then missed a 10-foot par putt on the closing hole. He shot 73 and was among five player who were one shot behind.

Jhonattan Vegas, winless since the Canadian Open four years ago, had a 68 and will be in the final group with Scheffler on Sunday.

Matthew Wolff, one of the steadiest performers in the fall portion of the PGA Tour schedule, had a 69 and gets another shot at winning for the first time since he stepped away from golf for two months earlier this year to reset.

Kramer Hickok had a 70 and was in the group at 204 that included Martin Trainer, the 36-hole leader who struggled to a 74.

The group two shots behind included Colonial winner Jason Kokrak, who had to play 25 holes on Saturday because of a weather delay at the start of the week, and he was all over the place.

Kokrak was at 8 under when he returned to play the 12th hole of the second round. He played his last seven holes in 7-over par and wound up nine shots out of the lead. He bounced back with seven birdies in his third round of 66 to right back in the hunt.

Wolff also was atop the leaderboard at 8 under until he took double bogey on the 17th hole when his second shot came up short and in the water. He took a penalty drop, hit the same club to 7 feet and missed the bogey putt.

“I just misjudged the wind,” Wolff said. “To this moment, I really don’t know what happened on that hole. It might have just been not as good of a lie as I thought.”

Either way, he’s right in the mix in what should be a compelling finish with a dozen players within three shots of Scheffler’s lead.

That includes Trainer, who took a double bogey on the front nine and then dropped consecutive shots on the back nine. But he finished with a 10-foot par that left him only one shot behind.

Not bad for someone playing the weekend for only the second time since April.

“I’m certainly hitting it better than I have in the recent past, even today,” Trainer said. “I think I have turned a corner and whatever happens this week happens. But I’m just excited about the future, to be playing well again.”

Scheffler has been playing well ever since he left his four years’ at Texas with a business degree, first on the Korn Ferry Tour and then well enough to qualify for the Masters as a PGA Tour rookie. He also was picked for the Ryder Cup, where he delivered one of the biggest birdie putts late in the fourth session and then took down Jon Rahm in singles.

He also has contended in majors. All he’s lacking is a win, and with so many players in contention, it doesn’t figure to be easy.

Scheffler had a chance to win last week, contending for the lead until one errant tee shot led to double bogey on the back nine at Mayakoba.

“I feel like I’m playing solid golf right now,” Scheffler said. “I’m hitting a decent amount of fairways, a decent amount of greens, starting to roll the ball pretty good. There’s a few days where the putts may have not all gone in, but I always seem to be hitting them right around the cup at the appropriate speed so they’re bound to start falling eventually.”

An out-of-nowhere 63, as the weather turns and a major champ’s neck issues
Ancer leads in Saudi as DJ (back) withdraws
Rory McIlroy has been on just as much of a heater as Jon Rahm, according to this crazy stat
Highlights | Round 2 | TOUR Championship 2020
Bubba eager to return to Masters, join festivities