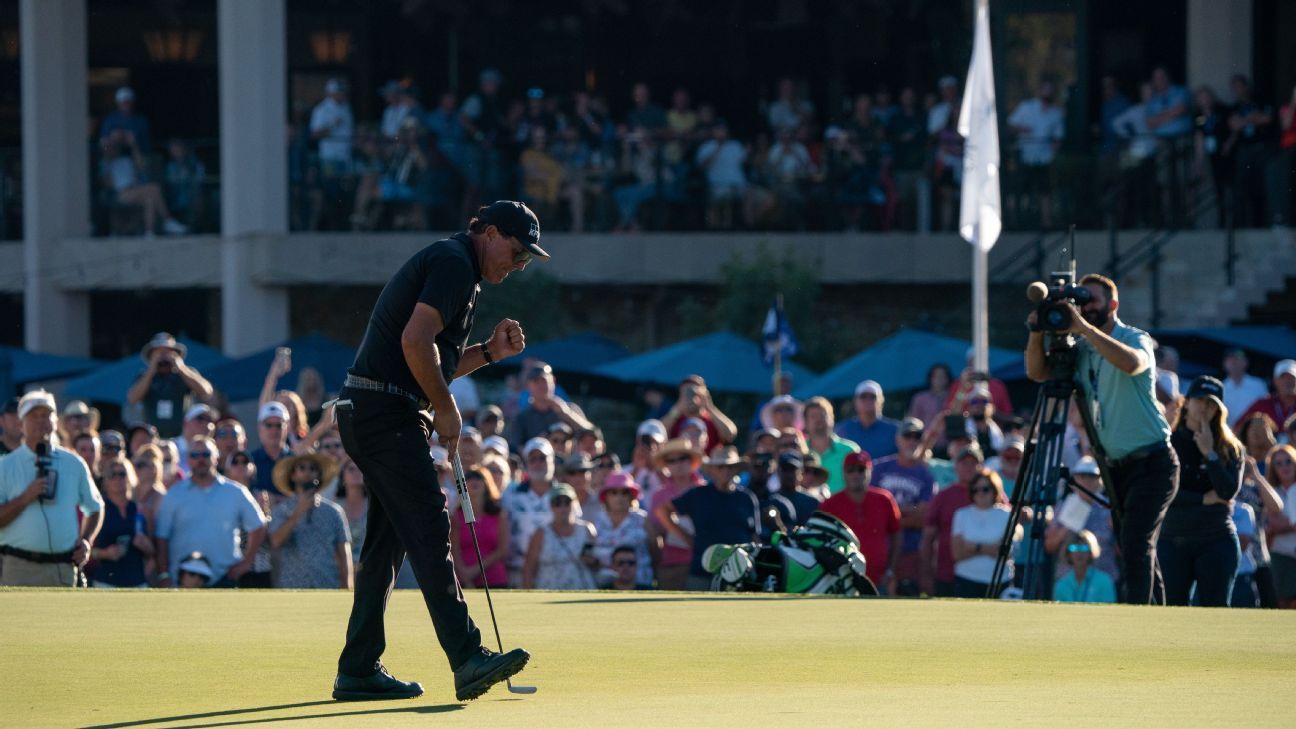 Mickelson shot a 6-under 65 at Phoenix Country Club, getting up-and-down from short of the par-5 18th for birdie to reach 19 under. He joined Jack Nicklaus as the only player to win four of his first six PGA Tour Champions starts.

Langer, who battled back pain all weekend, struggled getting putts to fall as he labored through a 2-under 69. The 64-year-old German finished at 12 under and had to wait for Jim Furyk to see if he would win the Schwab Cup for the fifth time in seven years.

Furyk needed to win the tournament or tie for third and have Langer end up worse than eighth to win his first PGA Tour Champions series title. He dropped in a long birdie putt on the par-4 17th to pull within two of the lead, but Mickelson’s birdie on No. 18 made it three shots.

Needing an eagle to win the Schwab Cup, Furyk pulled his second shot into the grandstand left of the 18th green and and had to drop in mulch. He hit his next shot across the green into the rough and got up and down for par. Furyk shot 71 to tie for fifth at 16 under.

Mickelson entered the final round three behind Furyk and surged into the lead with birdies on Nos. 14 and 15. The six-time major champion had a bogey-free round.

New Zealander Steven Alker, a PGA Tour Champions qualifier just three months ago, shot 67 to finish second at 18 under. Darren Clarke had a 64 and David Toms a 65 to tie for third at 17 under.

Langer shot under his age for the first time in the third round, a sterling bogey-free 63 with bookend eagles that moved him within six shots of Furyk’s 16-under lead. He pulled within two shots with birdies on Nos. 1 and 4, then rolled in a 15-foot eagle putt on the 306-yard par-4 fifth to reach 14 under.

Langer played all 39 PGA Tour Champions events in the wraparound 2020-21 season, putting him in position to win another Schwab Cup despite finishing 17th Sunday.

Alker had a dream finish to his first PGA Tour Champions season.

He had no status after turning 50 in July and qualified for the Boeing Classic in August. Alker put together top-10 finishes every week to keep playing and become eligible for the postseason, including a win last weekend at the TimberTech Championship in Florida.

He kept the roll going on Sunday, overcoming a bogey on the par-3 second with five birdies to finish one behind Mickelson.

Triplett took the lead at 17 under with a birdie on the par-4 12th, but fell off with consecutive double bogeys after hitting onto the street along the par-4 14th and into the water on the par-3 15th.