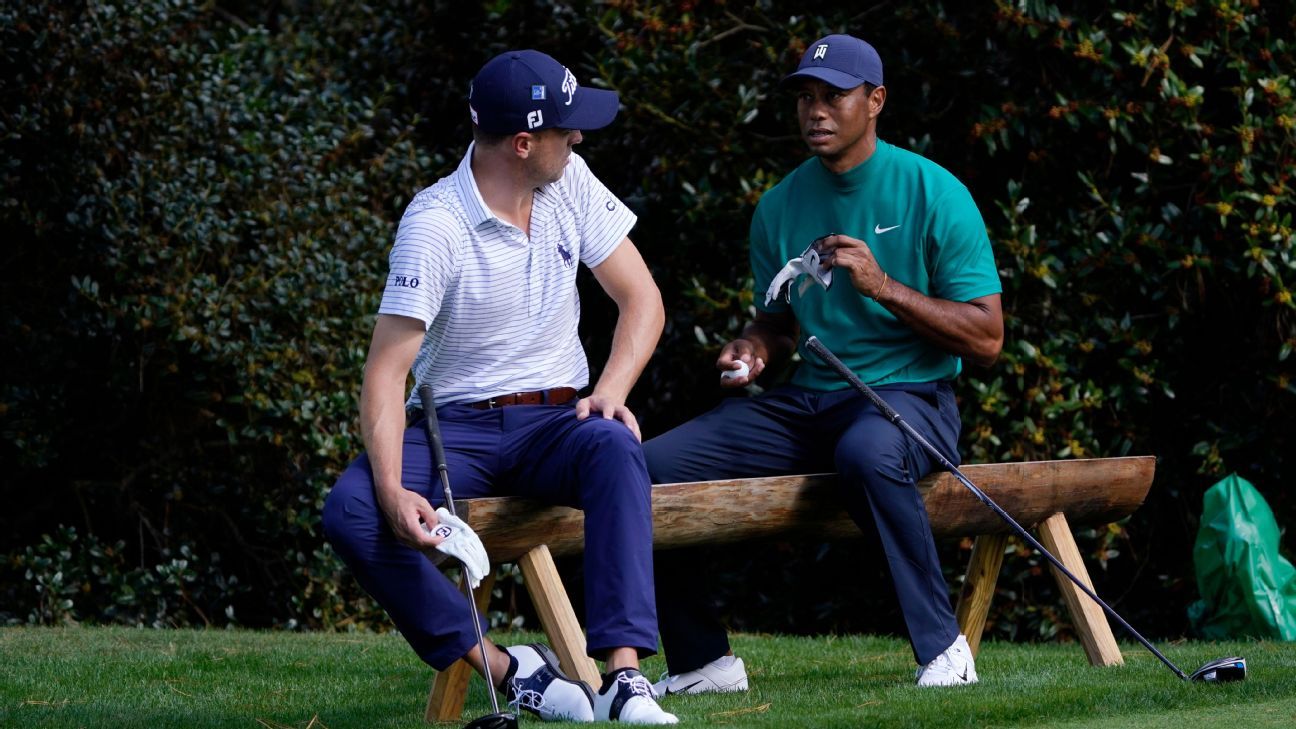 In addition to being a fine golfer who is expected to contend for more major titles as well as challenge for the No. 1 ranking, Justin Thomas has provided an excellent public service by giving some optimistic yet cautious updates on the status of Tiger Woods, his friend and neighbor.

The latest came via the “No Laying Up” podcast last week in which Thomas, 28, disclosed that he visits Woods regularly during his off weeks, bringing his puppy to play with Woods’ dog while visiting with Tiger’s son, Charlie.

“[Tiger is] still his sarcastic a–hole self, so nothing’s really changed there,” Thomas laughed. “So I’m glad to see he’s as chipper as always.”

Whether Woods is ever a competitive golfer again is up to interpretations some nine months after the serious auto accident he endured in February, causing injuries to his right leg and foot.

Thomas, like anyone who is close to Woods or in his circle, is careful about what he says, cognizant of the very private nature that Woods has embraced throughout his career.

And yet it is difficult to imagine Thomas — a 14-time PGA Tour winner including the 2017 PGA Championship — spouting his opinions about Woods without feeling he had some sort of nod to be able to do so. That should be viewed as a positive. Woods is allowing some information about his situation — which he has not publicly addressed other than a social media post and a brief interview with Golf Digest in April — to get out. In September, Steve Stricker was the first to even hint out loud that Woods would return to competitive golf, saying “his ongoing rehabilitation to try to get better and try to play golf again, and that is going well. He’s progressing, he’s doing well, things are moving in the right direction.”

With such little information, you have to read between the lines. Thomas, for example, was asked about a potential Woods comeback.

Thomas: “I don’t know. I know he’s going to try. I don’t see him ever playing if he can’t play well. He doesn’t strike me as a guy that’s going to play at home shooting a bunch of 75s and 76s and he’s like, ‘All right, I’m gonna go give Augusta a try this year.’ That’s just not gonna be him.”

Interpreting those words: Thomas believing Woods will try is a great sign; the fact that he’s hedging by saying he can’t see him doing it if Tiger is shooting in the mid-70s seems pretty obvious: Woods is not going to come back and settle for being mediocre. Thomas could easily be suggesting he sees the days of Tiger shooting low scores a good bit off, which only seems realistic.

Interpreting those words: Thomas hit on the point that is most important of all — Woods’ quality of life. It’s quite fair to say Woods is fortunate to have survived such a horrific crash. The fact that he is now up and about is a great sign. Thomas is allowing for the possibility that the most favorable outcome is simply leading a normal life. A golf career is the least of Woods’ concerns. And yet, Thomas acknowledges the trademark determination that Woods has always possessed.

Thomas: “It’s ‘Groundhog Day’ — every day is exactly the same for him.”

Interpreting those words: You can take that in a lot of different ways. It sounds ominous, that perhaps his rehabilitation has hit a wall and that Woods is at a point where he cannot do any more. Or, you can take that to mean Woods is being held back, that he wants to push beyond where he is and his doctors are telling him to be patient.

Woods made a career of fighting beyond boundaries. Only in recent years has he learned to heed those warnings. He didn’t overdo it with his return from spinal fusion surgery. He knows it would make no sense to do so now. At least, that is one potential way to look at it.

The photos of him last month standing unaided while watching Charlie play in a junior tournament were a good sign. That he had been cleared to walk without any assistive devices naturally led to speculation about whether or not he could begin pitching or chipping or hitting any shots.

And there appears to be growing sentiment that he will be in the Bahamas in two weeks for the Hero World Challenge. A navigational tracking app saw that his yacht, Privacy, had made the journey from South Florida to the marina near Nassau where he keeps it. That doesn’t necessarily mean anything. Woods could be going there for Thanksgiving. He could be going there for other promotional or commercial endeavors. But he could also be going there for his tournament.

Keep in mind, the Hero wasn’t played last year. The Genesis Invitational, run by Woods’ foundation, was played in February without spectators. Because of the COVID-19 pandemic, Woods’ annual Tiger Jam in Las Vegas was canceled each of the past two years. Those are huge moneymakers for his foundation that, like many other entities, have been hurt by the pandemic.

Hero, the title sponsor of his Bahamas tournament, would undoubtedly love to have Woods in attendance simply for the boost it will bring to the brand and the attention focused on the tournament. And that only helps Woods’ foundation raise funds. That is important to him. But so is staying as private as possible.

The PGA Tour is contemplating several changes to its fall schedule that would include some big-money, guaranteed appearance events while possibly altering the way FedEx Cup points are awarded.

Both the Associated Press and Golfweek have reported that a plan that would include four to six no-cut events would likely be played overseas, and not only include hefty prize money for all who participate, but appearance fees as well.

Nothing is decided, and PGA Tour officials say it is still in the talking stages. But clearly it has gained some momentum. And while the timing is good in that it seems to be a way to combat the possibility of a rival golf endeavor (the Greg Norman-led, to-be-named league or the Premier Golf League), it seems such discussions had been taking place as a way to better compensate the top players.

The idea would also include some sort of system to protect such players on the FedEx Cup points list. This fall, there are nine events — the last one is this week’s RSM Classic — that make up the start to the 2021-22 season. They began two weeks after the Tour Championship, and many of the game’s top players have long lamented the fact that this is the time of year when they might possibly shut it down, only to resume in January and be well back in the standings.

Meanwhile Patrick Cantlay, who won the 2021 FedEx Cup, has yet to play an event this season and will wait until the Sentry Tournament of Champions in January.

After winning the Charles Schwab Championship for his fourth victory in just six PGA Tour Champions starts, Phil Mickelson is ready for a break — and still has plans for more glory on the PGA Tour.

Mickelson, 51, shot 65 on Sunday and didn’t make a bogey at Phoenix Country Club to join Jack Nicklaus as the only players in Champions history to win four of their first six starts.

It capped a satisfying year for Mickelson, who won twice on the Champions Tour but also captured the PGA Championship in May for his sixth major title and 45th PGA Tour win. He didn’t do much else on the regular Tour outside of that victory. Still, he appears poised to at least attempt to add to those totals.

“I’m hoping to use the opportunity to play and compete here [on the PGA Tour Champions] as a way to keep my game sharp and have a few special moments on the regular Tour like I had this year in May,” he said after his Charles Schwab victory. “If I could have a couple more of those, that’s really what motivates me to work hard, to get in the gym in the offseason, put in the time and the effort to have those special moments. I would love to have a couple more. And then these are great, too.”

Mickelson said he plans to take the rest of the year off. He did not disclose his schedule, and suggested he is unsure where he will play. However, he is the tournament host of the American Express Championship outside of Palm Springs, California, which is played the third week of January — his typical starting point.