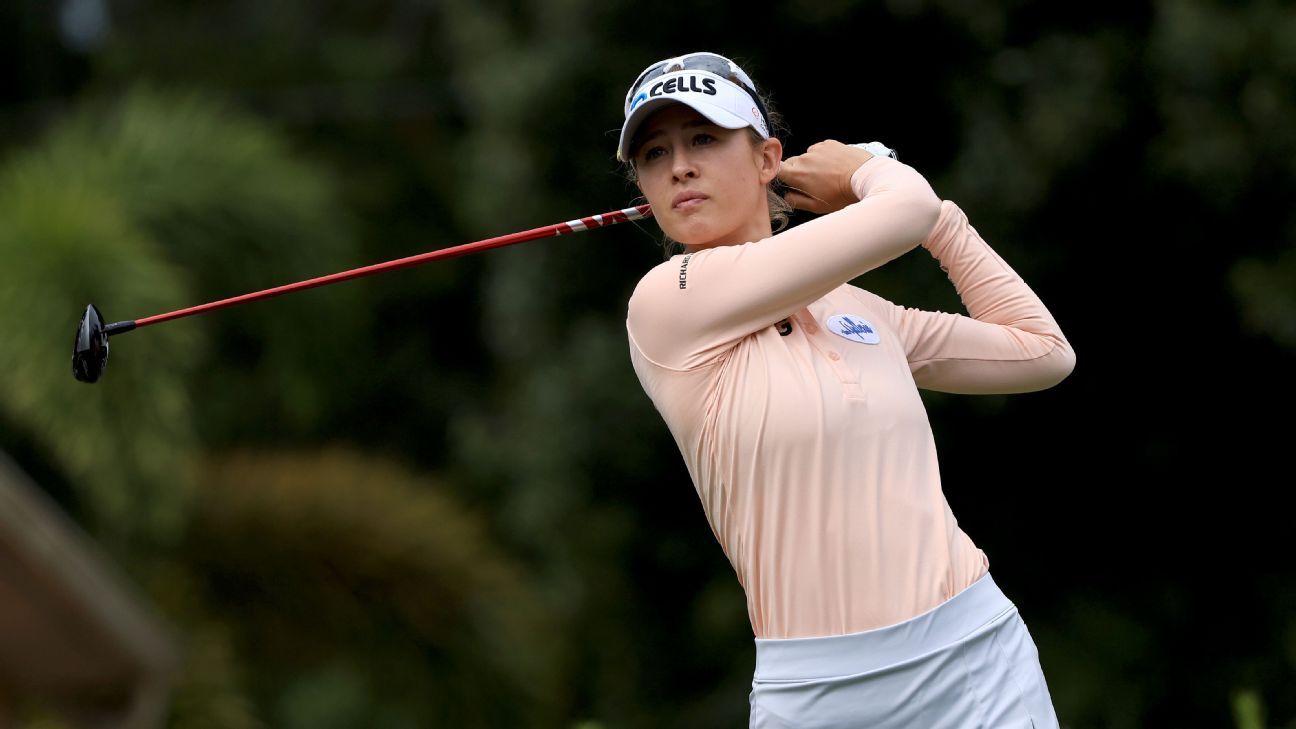 BELLEAIR, Fla. — Nelly Korda started with two birdies and finished the same way Saturday, making up plenty of ground along the way for a 7-under 63 that gave her a share of the lead with Lexi Thompson in the Pelican Women’s Championship.

Low scores ruled the day again at Pelican Golf Club, with 10 rounds at 65 or better.

Thompson did her part with a 65 that allowed her to join Korda at 16-under 194, with no shortage of contenders right behind them heading into the final round.

“I’ve been hitting it actually really close this week, giving myself a lot of opportunities,” Korda said. “Capitalized a little bit more today. But it’s going to probably take a low one tomorrow.”

Eight players were separated by four shots, a list that included defending champion Sei Young Kim (65) and long-shot Christina Kim (65), who earned a late sponsor exemption that all but ensured she would keep a full LPGA Tour card for next year.

Jennifer Kupcho was tied for the lead until she ended a streak of 45 consecutive holes at par or better by closing with a bogey for a 66. She was along in third, with Kim and Kim two behind.

Korda finished her round with a 9-iron from 128 yards that floated out of the sky to 3 feet. In the week she returned to No. 1 in the women’s world ranking, Korda now has a chance to make up ground on Jin Young Ko in the points-based award for LPGA player of the year.

Ko, who has won four times in her last seven starts to take over the top spot, leads by 15 points, with 30 points available to this week’s winner.

ANA Inspiration winner Patty Tavatanakit, having already clinched LPGA rookie of the year, would need to win to have a mathematical chance at player of the year. She had a 64 and was three shots behind, along with Lydia Ko (64).

“I just want to keep it light. I don’t want to think about winning tomorrow, just because if it were to be mine, it will be mine tomorrow if I can hold putts, hit good shots, execute,” Tavatanakit said. “If not, I’ll just go out there and just finish another round and one step closer to offseason.”

Korda already has three victories this year on the LPGA Tour — her Olympic gold medal does not — and could join Ko with a fourth win.

Ko finished with a birdie for a 67, but she was slowed by three bogeys and fell seven behind.

Thompson has even more at stake. She has gone more than two years since her last LPGA Tour victory, having already squandered a great chance earlier this year at the U.S. Women’s Open.

Thompson, tied with Kupcho to start the round, had three straight birdies on the front nine to get in front and stay there for most of the day.

“It’s amazing what she’s accomplished,” Thompson said about Korda. “Everybody knows how good the Korda sisters are as players and athletes. The whole family is. It’ll be a good final day. Looking forward to it. Hopefully we just make a lot of birdies out there.”

The top 60 in the Race to CME Globe after this week advance to the season-ending CME Group Tour Championship, which offers $1.5 million to whoever wins.

That appears set barring a big charge Sunday by Maria Fassi of Mexico, who bogeyed her final hole for a 68 and was six shots behind. Fassi likely needs to be runner-up to have any chance at getting into the top 60.

Even more critical for some players is finishing in the top 100 in the Race to CME Globe standings to keep full cards for next year. Lauren Coughlin was a late entry into the field at Pelican Golf Club and is making the most of it. She was No. 106 in the standings and shot 60 to tie for 11th, which would put her among the top 100 if she can stay there.

“I’ve been trying not to pay attention to it, just not give myself any added pressure,” Coughlin said. “I’m just trying to keep making birdies.”

Possibly the Fastest way to improve ANY golf swing!
The SIMPLE Golf Swing Sequence Tip You Need!
23 questions about the Rory McIlroy-Patrick Reed feud, with 23 one-sentence answers
Keith Pelley says he and Jay Monahan have recused themselves from LIV Golf’s OWGR application process
The Reality Of Life On Tour