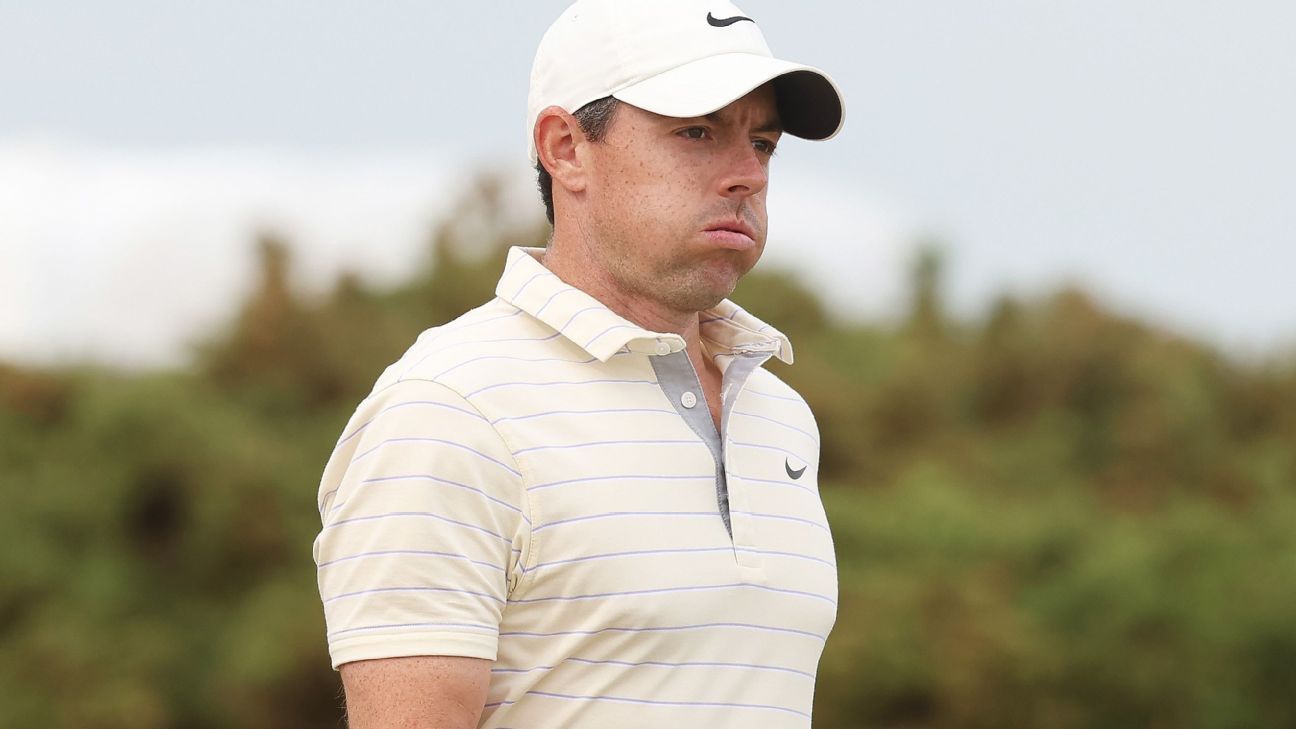 VIRGINIA WATER, England — When Rory McIlroy runs into some of his former Ryder Cup teammates at Wentworth this week, don’t expect them to spend much time reminiscing about fond memories.

European Ryder Cup stalwarts Sergio Garcia, Lee Westwood and Ian Poulter are among the contingent of LIV Golf players who are competing at the BMW PGA Championship this week, much to the dismay of McIlroy and the others who have resisted the financial gains of joining the Saudi-backed breakaway series.

During a forgettable Ryder Cup for Europe last year at Whistling Straits, one of the most memorable moments came when McIlroy broke down in tears when talking about how much he loved his teammates. On Wednesday, he merely sighed when asked how what seemed like a tight-knit bond with Garcia, Westwood and Poulter can survive the fallout from LIV.

Shane Lowry also said there could be some awkward meetings this week with players he used to be “good friends” with.

“Obviously I haven’t seen them in a long time now. Don’t hang out with them anymore,” Lowry said. “Probably won’t be going out for dinner because we haven’t seen each other. But yeah, there are certain lads that I shake hands with and certain hands I wouldn’t.”

So the rift between players created by LIV shows no sign of healing at Wentworth, where Billy Horschel and Jon Rahm both took aim at the LIV contingent on Tuesday.

The LIV golfers who are European Tour members are allowed to play at Wentworth while their suspension for playing in the inaugural event of the breakaway series is under appeal. Their Ryder Cup status is also subject to legal appeals.

U.S. Open champion Matt Fitzpatrick said he was “fed up with talking about” the whole situation, but acknowledged that the current tensions could make it difficult to include any LIV players on next year’s Ryder Cup team.

“There’s one person I would have, who I would be fine with playing with and have on the team,” Fitzpatrick said, declining to name the player. “But you know, next year is obviously a long way away, and there’s a lot of stuff to come with the whole situation. So that might change things, change attitudes even more, and then that probably makes it difficult.”

The European Ryder Cup team for next year was already affected by LIV Golf when Henrik Stenson was stripped of the captaincy for joining the breakaway series. When his name came up at the end of McIlroy’s news conference as the only person to win both the PGA Tour’s FedEx Cup and the European Tour’s Race to Dubai — a feat the golfer from Northern Ireland is trying to equal — McIlroy just quipped: “Who?”

McIlroy had said before the event that it would be “hard to stomach” playing alongside the LIV golfers this week, but said he had yet to see most of them at Wentworth.

“My opinion is they shouldn’t be here, but again that’s just my opinion,” McIlroy said, before taking a jab at LIV Golf’s format of only playing three rounds instead of four and starting on different holes. “But we are all going to tee it up on the first tee tomorrow and we are all going to go play 72 holes, which is a novelty for them at this point, and then we’ll go from there.”

McIlroy said he stayed away from a players’ meeting with European Tour chief executive Keith Pelley on Tuesday evening that included golfers from both factions.

“It wasn’t really a situation I wanted to get myself in knowing who was going to be in that room,” McIlroy said. “So I sort of removed myself from it and let them thrash it out.”

Pelley gave no details of what was said at the meeting at his own news conference, saying it was “very short and there were a couple of questions from LIV players that I think we answered.”

Pelley also launched a staunch defense of the financial viability of the European Tour — recently rebranded as the DP World Tour — and its ability to compete commercially.

“It is easy to get dragged down by the LIV propaganda machine, churning out negative news stories and misinformation about the poor state of the traditional golfing world, including our tour,” Pelley said. “It’s just not right.”

McIlroy, Fitzpatrick and Horschel all play in the same group on Thursday so they won’t have to share the course with any LIV players until the weekend at least.

When asked if it would give him added motivation to play in the final pairing on Sunday alongside a player who joined the Saudi-backed series, McIlroy couldn’t resist one more jibe.

“They are going to be pretty tired on Sunday,” he said, “it will be the fourth day.”

OWGR says no (for now) to LIV Golf’s workaround to get World Ranking points
PGA & LPGA Tour – How I Mark My Titleist
Bryson DeChambeau moves into final 16 at the Pro Long Drive Association Championship
Tiger Woods is ‘very much a part of Team USA’ and will be for 2023 Ryder Cup, says U.S. captain Zach Johnson
‘What’s up Happy Gilmore?’: Spencer Levin uses distinctive putting grip at Shriner Children’s Open